Mosaic Records Presents "The Complete Hank Mobley Blue Note Sessions 1963-70" - 8 CDs with 74 tracks from the second great phase of Hank Mobley's career in state-of-the-art sound. With all the developments in recent years with analogue to digital converters and hi-res transfers that bring the CD to almost the same quality as analogue LPs, we have returned to the original analogue tapes of these Mobley master tapes in order to make them available like never before.

Hank Mobley, as a member of the original Jazz Messengers, was one of the founding fathers of the hard bop and the Blue Note sound. From 1954 to 1961, he had fruitful relationships in the bands of Horace Silver, Art Blakey, Max Roach and Miles Davis among others. He logged 13 sessions for Blue Note alone during that period which also highlighted his considerable talents as a composer. But through all his recording and touring activity, he remained a musician's musician , largely overlooked by the jazz press and fans at large. His fluid improvisations, harmonic brilliance, hypnotic lyricism and warm round tone didn't get the attention that more extroverted tenormen like Coltrane and Rollins could command.

Silent for most of 1962, Mobley's return in 1963 showed some major changes in his approach. His rich warm, round sound remained, but Hank pushed more air through his horn creating a herder, more in-your- face tone. His rhythmic approach was punchier, although his graceful ability to skate over and through the pulsating rhythm of master rhythm sections remained. His solos did demonstrate pore economy as he eliminated filigree and excess notes, thanks to lessons learned sharing the stage with Miles Davis.

In 1963 Hank began, making sideman appearances on Donald Byrd's "A New Perspective" and Herbie Hancock's "My Point Of View" This set covers his own sessions from that year until his final session for the label in 1970. Although most of this material was issued on CD at one time or another in the '80s or '90s, all of this music is out of print. Mosaic has returned to the original analogue tapes to create an audiophile listening experience that take advantage of today's high level of analogue to digital converters and to 24/96 transfers that bring the listener a sound that is comparable with vinyl.

On March 7, 1963, he recorded an album's worth of material with Donald Byrd, Herbie Hancock, Butch Warren and Philly Joe Jones, but Alfred Lion didn't think that all the material was strong enough to release. A second session in October with Lee Morgan, Andrew Hill, Joe Ore and Philly Joe yielded another six tunes.

Blue Note selected the best four tunes from the October session with two from the March session to create the album "No Room For Squares," released in May 1964. Hank was back and there were major changes to his approach. As Joe Goldberg wrote in the liner notes for that album: "I hear a greater order, economy and authority in his work so that it now becomes much easier to understand the respect his colleagues have had for him all these years.

Mobley's talents as a composer continued to grow. He expanded his language to include modality and samba rhythms. Even on the obligatory funk tune to lead off an album like "The Turnaround" or "The Flip," Hank took extra care to go beyond the 24-bar blues template to create fascinating works with unique structures that engage the soloists. His gift for melody and finding fresh harmonic chord sequence always enriched his compositions.

On the 12 sessions included in is set between 1963-71, Mobley's achievements, as an improviser, composer and leader are chronicled.. Seven of these sessions were released very soon after recording including acknowledged masterpieces like "No Room For Squares," "The Turnaround," and "Dippin'" as well as lesser known gems like "A Caddy For Daddy" and "Hi Voltage."

The five albums of material that were issued much later rival the originally issued material. "Straight No Filter" is an exquisite half session with Lee Morgan, McCoy Tyner, Bob Cranshaw and Billy Higgins. "Third Season" features a septet with adds guitarist Sonny Greenwich and alto saxophonist/flutist James Spaulding to the standard quintet instrumentation, which inspires some of Mobley's best writing. The piece de resistance among the rescued gems is "A Slice Of The Top," with an octet that adds euphonium, tuba and alto sax & flute to ensemble for some gorgeous writing on four Mobley originals and one standard with orchestrations by Duke Pearson. His final Blue Note session features the title tune "Thinking Of Home" as a three-part suite that is some of the best of Hank's compositional work. 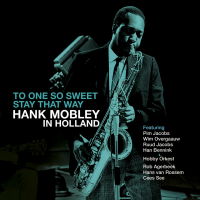 All About Jazz musician pages are maintained by musicians, publicists and trusted members like you. Interested? Tell us why you would like to improve the The Complete Hank Mobley Blue Note Sessions 1963-70 musician page.