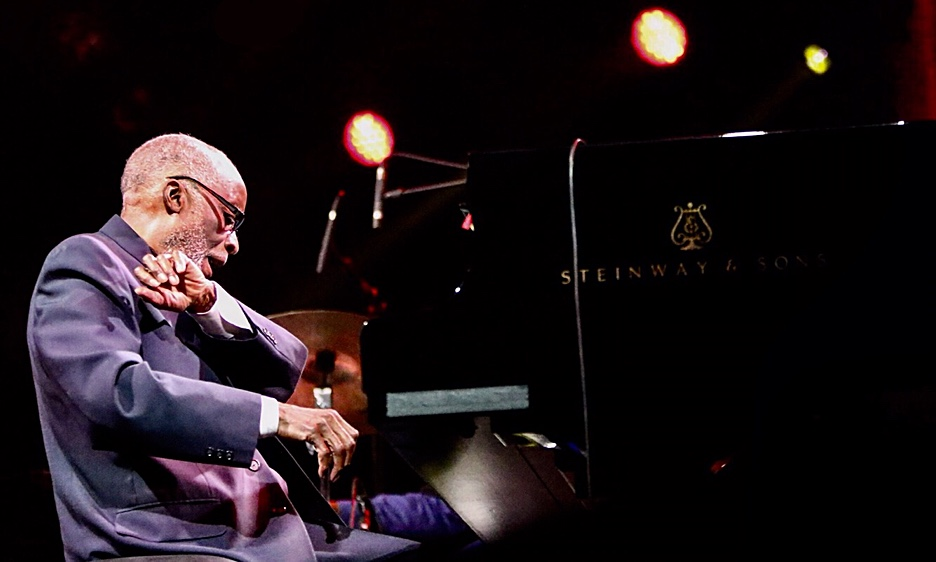 How does a remote village in South West France end up hosting an international jazz festival for 42 years? The logistics come later, but the answers to most questions about Jazz in Marciac lie in the superb quality of the music.

The first four days were each blockbuster performances. First Sting—My Songs, then came Gregory Porter's Nat King Cole and Me, Wynton Marsalis with the music of Charlie Parker and Dizzy Gillespie and George Benson remembered the music of Chuck Berry and Fats Waller. That is a serious list of names. Serious enough to open the first days of a jazz festival anywhere in the world.

Today Marciac is home to 1,240 inhabitants, up from 1,131 in 1978 when the festival began. The village is between Toulouse, where Airbus makes planes, and the pilgrimage destination of Lourdes, near to the French border with Spain. Every year they erect Le Chapiteau on the village rugby field. It's a metal-framed marquee covered in heavy white plastic material. It's more than a marquee. It's the size of an aircraft hangar capable of seating 6,000 spectators, but by removing the seats, 11, 000 stood to hear Sting perform. There are also performances in the 500 seat L'Astrada concert hall renowned for its acoustic values.

Bill Coleman, "The gentleman of the trumpet," made his name in New York City. After the war, Coleman moved to France, and in 1978 he played the first Jazz in Marciac festival with saxophonist Guy Lafitte. Coleman later collaborated closely with the festival's Artistic Director, now also Mayor of Marciac, Jean-Louis Guilhaumon. In his opening speech, Mayor Guilhaumon commented: "Every year is a gamble, so far we have stayed ahead." He leads a huge community effort by volunteers and their families, local farmers who roast food in the square, local wine producers, bakers, stores and restaurants. Everything is honest local quality, they are highly professional and keep prices reasonable. The current ambassador for Jazz in Marciac is another American gentleman trumpeter, Wynton Marsalis, who plays the festival every year.

The festival budget reached $4.75 million, met 70% by ticket sales, 21% donations and 9% various government support, but the positive financial impact in this rural region of France has been independently estimated to generate a further $20 million in hospitality incomes. Over 250,000 festival-goers have to eat and sleep somewhere over three weeks.

Chick Corea's Spanish Heart Band played his interpretation of all the rich ingredients which make up the music of Southern Spain. Corea's long term project fragmented the culture of rhythmic clapping palmitas, the guitar, the fire of flamenco dance, the passion and the pain of gypsy music with roots in India. He added the mellow flute, and his piano sounds to the traditional instruments. Then he reconstituted the whole into an amalgam of Spanish music. The band played "My Spanish Heart," "Antidote" and "Desafinado" by Antonio Carlos Jobim. Corea's last piece "Zyriab" was written by flamenco legend Paco De Lucia whose former group-member Jorge Pardon played flute. Mike Rodriguez trumpet and Steve Davis trombone were the brass section, the rhythm was provided by Nino Josele guitar, Carlitos del Puerto bass, Marcus Gilmore drums, Lusito Quintero percussion, and Nino de Los Reyes the flamenco dancer.

Wynton Marsalis and the Young Stars of Jazz

When Wynton Marsalis first came to Marciac, the young stars who joined him on stage were not even born. They all played seated except Carlos Henriquez on bass. He wrote "Marciac Pyramid" and led them in to the front line playing the theme together. Camille Thurman on the tenor saxophone took an extended solo followed by Marsalis who plays with impossible clarity, intensity, and precision. They moved on to Marsalis' five-part "Integrity Suite" selecting "No Surrender," which recognizes how hard it can sometimes be to carry on in life. The flute from Alexa Tarantino added a soft dimension and an excellent piano solo by Isaiah Thompson received warm support. "Time to wake up" by Henriquez began with his bass introduction followed by alto saxophone from Alexa Tarantino. As they played, Marsalis registered his responses with darting movements and rapidly changing facial expressions. In his solo, Marsalis extracted chirping sounds from his trumpet with a plunger mute. There were fast exchanges weaving lines between Marsalis and Tarantino. "Something about belief" blossomed into a melodic big band sound in unison from the front line, with brushes on drums and hi-hat from T.J. Redick. Tenor saxophonist Camille Thurman delighted the audience by going into high clear scat singing, hitting her notes sweetly. On stage Marsalis was continually encouraging, introducing, praising the young stars. He asked Henriquez to explain his next composition "Moses on the Cross" about the divisive Cross South Bronx Highway promoted by Robert Moses. The Latin rhythm was steady, and as Tarantino played the flute, everyone joined in singing a refrain about the highway, Proyecto de mi Vida, (project of my life). They played out with a Marsalis composition "The struggle to become aware," in which Sam Chess took a strong solo on trombone. The musicians are stars and young, their mentor led them with care. In their turn the young stars revere and respect Marsalis.

Manouche Gypsy Jazz is the Rosenberg family business. Two brothers Stochelo, Mozes and a 30-year friend Sani van Mullen on bass played "Stompin' at the Savoy," "Poinciana" and "Valse a Bamboula." There is fire and delicate romance in the Gypsy guitar style, "I Wish" by Stevie Wonder worked differently to the original version , but it worked. Nonnie came to play bass with brother Johnny who sang a Charles Aznavour classic "In the Old Fashioned Way." The Rosenbergs always include "Sophora" in their performances for their sister. Mozes is often billed as the rhythm guitarist, but he alternated the lead with his brother Stochelo in the Hot Club of France style. Mozes has also been composing. They played his "Mozology."Johnny sang "My One and only Love" and went into "I Got Rhythm" with a doubled-up section in the middle which was almost too fast to sing. For their encore, they played "Caravan" with an upbeat Spanish arrangement which invited the audience to shout Ole! as it ended in a sharp finish. A good number of spectators were dancing by the end of this exciting performance. Called back to the stage, they finished with Django's "Minor Swing."

As reported from the Nice Jazz Festival (July 24), Kokoroko is a London-born band led by trumpeter Sheila Maurice-Gray. They are reviving the Afrobeat dance music of Fela Kuti from the late 1970s. Kokoroko means "be strong" in the Urhobo language of Nigeria. People wanted to dance, and they did.

Jamie Cullum started his performance like a Rockstar, playing piano standing up, climbing on the piano and jumping off, driving a high energy show and attacking the piano with violence. His second song was "Taller" the title track from his album. Then into "Don't you know" a slow blues which made clear that Cullum can play jazz piano well and surrounds himself with good musicians like Tom Richards on keyboards, saxophone and supporting vocals. Enjoying the fine food and Armagnac in the Gascony region inspired him to write "Drink" to encourage everyone to live well and in the moment. Eventually, he slowed down and played some blues, a Ray Charles song "Hard Times." Next came an intimate version of "New York, New York" sung quietly, reflectively and played solo. Cullum has energetic delivery which he alternates with quiet, slow pieces, even a capella with his backing vocalists. They finished with "Marciac Come back Armagnac."

Sometimes it's a pleasure to dispense with drums and rhythm section entirely. From the first notes out of the bell of the trumpet and piano, this was one of those moments. The expression, swooping and feeling poured out in "Dive with me," and the piano replied in "Janice." The trumpet delivered minimalism with no sharp edges and superior tonal quality. It is hard to get the jazz club intimacy in a venue the size of an aircraft hangar, but two friends playing together made it happen. Nicholas Gardel trumpet and Remi Panossian piano titled their performance together "The Mirror." Gardel called for four notes from the audience, in France they use Doh Re Mi. He challenged Panossian to improvise on the notes, so the piano set off on a journey alone. Along the way Panossian discovered the four-note groove of "Whiter Shade of Pale." He skipped the light fandango and turned cartwheels into the Procul Harem tune and won a standing ovation. The roar of approval from 6,000 people enthused as one to their feet is uplifting.They played their compositions "I Fall in Love Too Easily" and "The Mirror" then into Gershwin's "I Got Rhythm." When two musician friends are alone on a big stage, "Lean on Me" has a special significance. The emotion in "EMY-Endless Memories of You" was palpable. Gardel muted his horn, and they played a beautiful, unhurried "Les Feuilles Morts" (The Autumn leaves) to finish. The thunderous applause and long line to buy their album The Mirror (Matrisse, 2019) was all the endorsement they need.

American born Melody Gardot is a striking woman. Blonde hair and a black suit made her a commanding presence on the stage lit with a dramatic blue wash. Strings were strongly represented by three violins, cello, bass, guitar with drums and the Yamaha piano for Gardot to play. The cello produced a background of frenetic electronic sounds in a Johnny Cash tune "Wayfaring Stranger." Next, the strings lent their big orchestral sound to "The Rain." Gardot plays the piano well and sings better but not with clarity or drive. Gardot and Mitchell Long on guitar sang in duet "Corcovado" by Antonio Carlos Jobim in memory of Joao Gilberto who had passed away a month before. The famous bossa nova is about a mountain in Rio de Janeiro, "Quiet nights and quiet stars / quiet chords from my guitar / floating on the silence that surrounds us."

As one of the forerunners of Ahmad Jamal, the music of Erroll Garner was presented in the village square by the Pierre Christophe Trio. (Garner and Jamal both went to the same elementary and high schools in Pittsburgh). They featured an unpublished tune from 1972 "My Lonely Heart" a flourishing ballad, "Dreamy," "Play, piano play" and a Garner arrangement of Burt Bacharach's "Close to You." Erroll Garner wrote and arranged a much-underrated songbook.

Born in Baku, Azerbaijan and schooled in European classical music, Shahin Novrasli retains his roots in his homeland's Mugham, a weave of poetry and improvised music. To that East-meets-West sandwich with a Mugham filling, he added jazz influences. A protége of Ahmad Jamal, his performance was titled "Baku to New York City." At sound check Novralsi was scrupulous about every nuance from the Steinway, the engineer was beside him making hand held adjustments until the sound felt perfect. Film cameras on tracks each side of the stage checked angles and all was ready for the evening,