BY IAN PATTERSON
January 23, 2013
Sign in to view read count 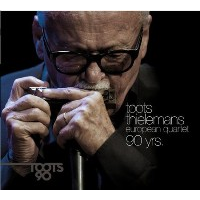 NEA Jazz Master and harmonica playing legend Toots Thielemans turned 90 in April 2012, and the milestone has been marked by an exhibition, a street-naming in his honor and a couple of releases. The double-CD Yesterdays and Todays (Dreyfus, 2012) contained 37 previously unreleased recordings spanning a remarkable 65 years, from 1946 to 2011. Then in September, the Lincoln Center paid tribute to Thielemans in a concert where the maestro was joined by pianists Herbie Hancock and Kenny Werner, bassist Marc Johnson, pianist/vocalist Eliane Elias, guitarist/vocalist Dori Caymmi and guitarist Oscar Castro-Neves. Finally, Toots 90 (Challenge Records, 2012) captures the great man live between 2006 and 2011, and sounding in very good nick indeed.

Thielemans "Waltz for Sonny," for tenor great Sonny Rollins, skips lightly on its feet, and introduces his sidemen of long-standing, pianist Karel Boehlee, bassist Hein Van de Geyn and drummer Hans Van Oosterhout, in a series of short solos. Thielemans has lost none of his warm lyricism, and his phrasing remains arresting. Thielemans has recorded dozens of film soundtracks over the years and the self-penned "The Dragon" and Rogier van Otterloo's "Dat MIstige Rooie Beest" convey his uniquely nostalgic tone.

The crisp phrasing of Boehlee's solo graces the gently swinging "Sno Peas"; written by pianist Phil Markowitz, this tune was originally recorded by Thielemans with pianist Bill Evans on Affinity (Warner Bros, 1979). Another song from that album included here is singer/songwriter Paul Simon's "I Do it for your Love." Thielemans toured with Simon in the 1970s and continues to include the number in his sets to this day. Thielemans' lyrical improvisation—wonderfully supported by Van de Geyn— provides a set highlight.

Thielemans' love affair with Brazilian music began with Honeysuckle Rose Aquarela Do Brazil (Philips, 1969) with singer Elis Regina; continued through the mid-1980s with accordionist/guitarist Sivuca; and into the 1990s on a series of more celebrated recordings with some of the modern greats of Brazilian music. Three Brazilian numbers are included here: Antonio Carlos Jobim's "Wave" and "One Note Samba" sound as fresh as ever, with Thielemans particularly inspired; but it's samba/bossa nova pianist Luiz Eça's "The Dolphin" that stands out most for its subtle delivery from this highly attuned quartet.

It's hard not to get misty eyed during a moving "What a Wonderful World" or at the sight of the standing ovation from the Tokyo crowd at the end. Thielemans, naturally enough, has slowed down, but he has already announced concerts for 2013, and as this two-disc document beautifully illustrates, he still has the ability to touch the soul.