Jean 'Toots' Thielemans is widely regarded by most people as the most accomplished harmonica player in the world. Of course, that's not all he does and it would be a great injustice to label him as just a good harmonica player. If you are not into Jazz, you may not have heard of his name but you have probably heard his music many times and I suspect you liked it. He is equally good at playing guitar, the accordeon and many other instruments. For instance, you will never hear anyone whistle jazz better than Toots. Born on 29 April 1922 in Brussels, he quickly got interested in music and was playing the accordeon at age 3 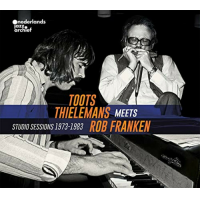 Every great jazz musician has his musical mate—an artist who perfectly complements his or her style and sound. Such jazz pairings that come to mind are Charlie Parker and Dizzy Gillespie, Pepper Adams and Donald Byrd, Thelonious Monk and Charlie Rouse, Gerry Mulligan and Chet Baker, Art Farmer and Benny Golson, Clifford Brown and Max Roach, ...

Good luck, best of luck, lucky day, lucky duck, lucky dog, lucky devil, all the luck, with a little bit of luck, lucky charm, beginners luck, just my luck--are you seeing a pattern here? I saw a musical theme. Lots of “Lucky" song titles and song lyrics, plus a reminder or two that not all luck ...

There are albums that seem to warrant physical engagement on the part of the listener. It is that sort of a music-listener dynamic where a long joyride or easy walk while enjoying the sounds is in order. By its very title Strollin' gives it all away here. And, it's no secret: this is take- it-along-and-enjoy-it music. ...