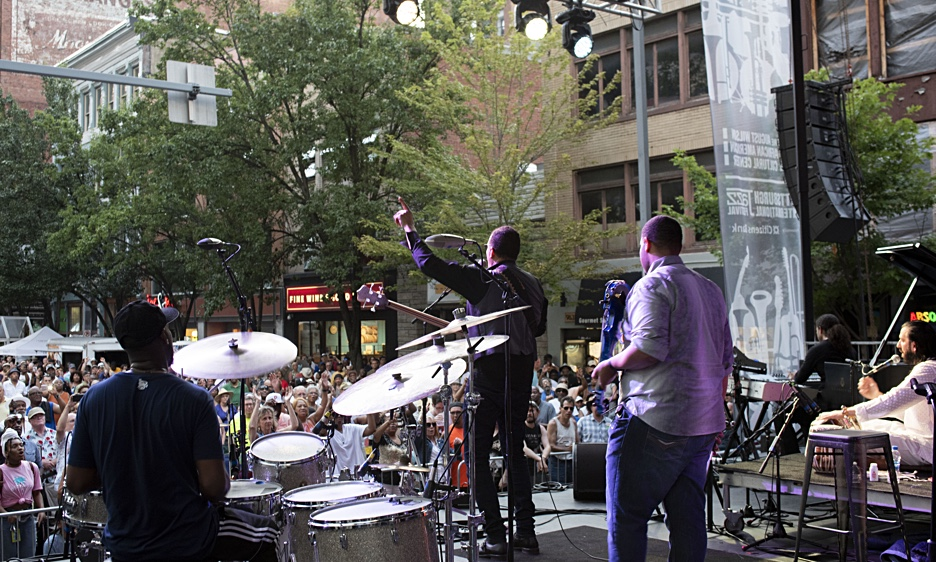 Now in its ninth year, the Pittsburgh International Jazz Festival continues to grow and prosper as one of the country's best jazz festivals. Tied to the efforts of the city's August Wilson African American Cultural Center, the festival continues to prosper under the leadership of center CEO Janis Burley Wilson. While there has been an increase in the number of ticketed events during the festival, these shows surely add to the coffers, helping to keep the rest of the weekend's offerings free and open to all.

Performances by Makaya McCraven, Patti LaBelle, Black WOMEN Rock, Tamara Tunie, and Paul Jost were the aforementioned ticketed events that took place during the festival and are beyond the scope of this review. Saturday's free sets began with a tribute to Pittsburgh's own Art Blakey as presented by drummer Roger Humphries. A veteran of Horace Silver's combo from the mid-60s, Humphries was more than capable of conjuring the ebullient spirit of Blakey's Jazz Messengers. The drummer's top-notch ensemble, including bassist Dwayne Dolphin barreled their way through such challenging material as "The Egyptian," "Crisis," and "Wheel Within a Wheel."

As the foremost vibraphonist of his generation, Warren Wolf made his second appearance at the festival tipping his own hat to some of the forefathers of jazz vibes. Made famous by Milt Jackson and the Modern Jazz Quartet, "Django" was given a garden-fresh treatment by Wolf and his quartet. Of more recent vintage, "Senor Mouse" found Wolf and pianist Alex Brown channeling the duo of Chick Corea and Gary Burton. Adding additional colors to the palette, vocalist Imani-Grace Cooper infused Herbie's Hancock's "Chan's Song" and the chestnut "Save Your Love for Me" with a smoky vibe that was highly engaging.

With his most recent project, organist Joey DeFrancesco seems to have reinvented himself in an effort to move beyond the traditional B3 organ fare. In the company of saxophonist Troy Roberts and drummer Ralph Peterson, DeFrancesco delivered a blistering set that was as hot as the noonday sun. On "Soul Perspective" the organist kept his bass pedals going while throwing down some serious trumpet riffs. His horn electrified via foot pedals, Roberts amazed with a boisterous tenor solo on "In the Key of the Universe," bolstered by Peterson's firecracker fills which often spilled over the bar lines.

Known as the trumpeter responsible for recording the solos featured in the Don Cheadle flick Miles Ahead, Keyon Harrold and his ensemble struck a soulful balance between mainstream sensibilities and more current trends. One of the few artists of his generation that is able to garner a youthful crowd while staying true to the music's tradition, Harrold is in a class by himself.

The final two free performances of the day were a lesson in contrasts. While the group War would entertain an overflow crowd ready to turn their early Saturday evening into a party, the preceding set by pianist Orrin Evans would be one of the highlights of the festival. In one of their rare appearances outside of New York, Evans would feature his Captain Black Big Band. Prior to their first downbeat, trumpeter Sean Jones and the festival's Janis Burley Wilson presented Evans with his award from the Jazz Journalist Association for Large Ensemble of the Year.

Adventurous and creative charts brought forth inspired work from Evans and the entire group, especially trumpeter Josh Lawrence and alto saxophonist Todd Bashore. Singer Joanna Pascale delivered sultry takes on "Sunday in New York" and Stevie Wonder's "Overjoyed," while Paul Jost wasted no time getting down to business during his cameo, scatting in a manner that recalled drum fills and bass slaps. A poignant tribute to the recently deceased drummer Lawrence Leathers concluded the set with the wafting sounds of Evans singing "I'm so glad I got to know you."

As Sunday brought with it another picture-perfect weather day, the Latin sounds of conguero Noel Quintana had the crowd on their feet dancing. With a full horn section augmented by guest trumpeter Ray Vega, Quintana's Latin Crew garnered a further incendiary edge via young timbale star Hugo Cruz. Another new talent, London-based saxophonist Nubya Garcia and her quartet would then continue to foster the afternoon's high octane atmosphere in their crowd-pleasing performance.

A few more tributes were in the offing later in the day. Trumpeter [{Sean Jones}} and saxophonist Gary Bartz tipped their hats to late period Miles as they engaged in extended jams on the trippy numbers "Bitches Brew," "In a Silent Way," "Sanctuary" and "Directions." Jones' electronic horn burst forth with incendiary phrases of his own design, spurred on by the keyboard work of Orrin Evans and the rollicking guitar of John Shannon. Bartz was clearly enthused by the vibe, smiling throughout and conjuring some of his own magic on the alto and soprano horns.

Channeling the spirit of Pittsburgh native Erroll Garner, pianist Christian Sands put forth a youthful exuberance that permeated everything from the music to his attire. Clad in a tailored cerulean blue suit topped off by a custom pair of white Chuck Taylor high tops, Sands wasted no time in getting down to business aided and abetted by bassist Luques Curtis and drummer Ulysses Owens, Jr.. Peak moments included a first-rate display of drumming by Owens on "Wild Music," a number that lived up to its title. Sands' arrangement of the memorable "Misty" was far from routine and brought with it a gorgeous rendition anchored by Curtis' burnished tones. In terms of technical mastery aligned with emotive performance skills, Sands is without peer.

Two masters of the music would conclude the festival in grand fashion. In the company of guitarist Marvin Sewell, bassist Rueben Rogers and drummer Eric Harland, the great Charles Lloyd decreed his set a spiritual gathering bookended by Strayhorn's "A Flower is a Lovesome Thing" and Ellington's "Come Sunday." A rare occurrence to be sure, power to the stage went out during the encore and without missing a beat Harland entranced with a lengthy drum solo. Lloyd subsequently joined the fold to bring the serendipitous event to its logical conclusion.

Stanley Clarke literally rocked the crowd with his crack ensemble of youngsters whose youthful exuberance inspired Clarke to move beyond his usual gimmicks. Violinist Evan Garr locked in with Clarke for a pleasing lead sound while tabla master Salar Nader lent a mesmerizing groove to new and old material including the well-known "School Days" and "Goodbye Porkpie Hat."

From Mary Lou Williams to Stanley Turrentine, Pittsburgh boasts a wealth of jazz artists claiming the city as their hometown. Throughout the weekend, the festival honored these legacies in many ways. Furthermore, a newly-opened jazz club has recently joined the ranks of those dedicated to this lineage. Located in the Shadyside neighborhood, Con Alma is the brainchild of musician John Shannon and chef/record collector Josh Ross. The cozy atmosphere put the live music at the forefront, while the eclectic menu provided further enhancement. During the break between sets, records from Ross' personal collection spun on the house turntable.

Con Alma exceeded this reviewer's expectations during a visit on festival weekend and like Janis Burley Wilson, Shannon and Ross confidently demonstrated their commitment to honoring the jazz legacy in Pittsburgh while fostering a new generation's love and respect for this native art form.