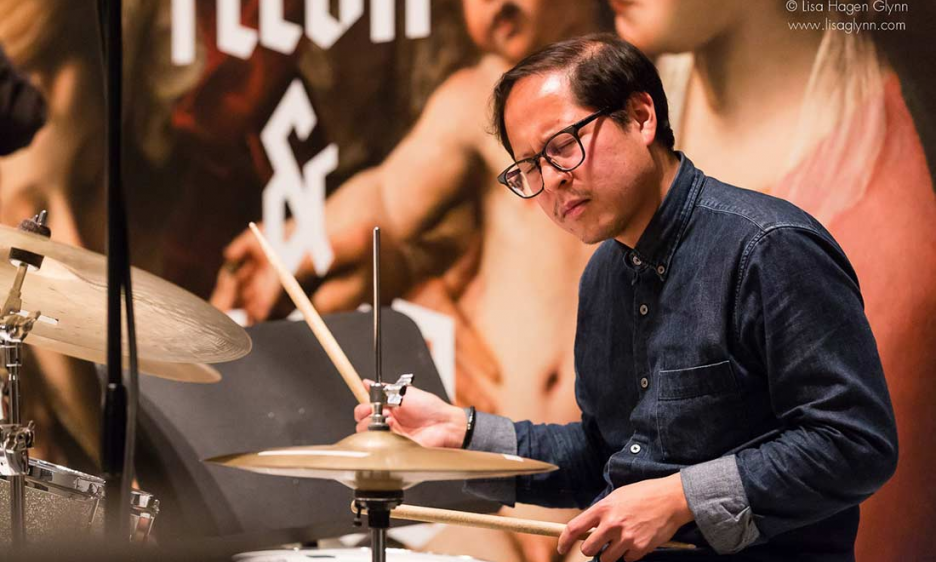 This all comes from jazz, and it can be free and it can swing, still lacking groove and still be everything.
&#151Christopher Icasiano

Seattle based drummer/composer Christopher Icasiano is seen to many as a sort of iconoclast. It would seem then that he somehow is one to break with tradition, to see those tentacles attached to the body of the jazz legacy as some sort of attachment to an outdated institution. Fleeting appearances are notably deceptive however, and with more than a cursory listen to Icasiano's work, the jazz tradition expressed through the legacy of its great drummers is definitively stated.

Icasiano's approach to percussion is not a fusion of styles, but an amalgam of all that has been, and all that is to come in jazz. Whether playing with Neil Welch in the genre-defying duo Bad Luck, or creating compositions for solo drum kit, Icasiano's playing is innovative, focused and free. His prevalent participation in more avant-garde and free forms may actually prevent the jazz community at large from having a full understanding of his ability to swing hard, and love every minute of it. Those that listen with full senses engaged will hear the strong presence of Max Roach and the intricacies of Jack DeJohnette. It steers its way through the multiple streams of musical accompaniment with which he interacts.

"That's where my foundation is. I spent a lot of time with Max Roach, I spent a lot of time with Jimmy Cobb. My favorite drummer is Jack DeJohnette. And then of course, Brian Blade and Bill Stewart. Everything I play is jazz, whether you're swinging or not, it all comes from jazz improvisation, like vocabulary. That's the core of it, but I feel like I've always tried to just emulate the sounds of all the different drummers. I think there was a point when I was getting into later Coltrane and Elvin Jones, hearing the way that they were approaching playing together in the band which was really free. After hearing that, it just made total sense to me. This all comes from jazz, and it can be free and it can swing, still lacking groove and still be everything," says Icasiano.

Bad Luck's most recent release Four (Origin, 2018) pins the listener down with a torrent of relentless energy. It personifies the heightened awareness between Icasiano and saxophonist Welch that has evolved since the two met at the University of Washington. Their, under the watchful eye and ears of mercurial trumpeter Cuong Vu, Welch began experimenting with pedals and electronics, while Icasiano developed a style that wrapped itself around it. Seeing the two perform live is especially engaging, witnessing the amazing energy harnessed by the sheer creative physicality of Icasiano's playing, and the expeditious, spatial extensions of Welch.

Vu and the adventurous UW faculty at the time left its impression on Icasiano. He teamed with Vu and bassist Luke Bergman in the band "Speak" with keyboardist Aaron Otheim, and saxophonist Andrew Swanson. The album Speak (Origin, 2010) highlights that period in Icasiano's collective awareness of what his path forward would look like. It opened unforeseen doors that led to musical environments that seemed strange and at the same time, extremely lucid and free.

He had the opportunity to study with noted drummer John Bishop in that period, a mentorship that would eventually lead to his current association with Bishop's creation, Origin Records. He was the steady mentor that would impact Icasiano's sound greatly. He received the opportunity to perform at Origin's annual Ballard Jazz Festival. Stylistic nuances gained during that period are colorful highlights of his playing in current times.

The formation of Bad Luck and the duo's subsequent recordings and live performances as well began to define an audience. While both Welch and Icasiano are in a very strong sense jazz foot soldiers trudging ever forward towards the light, the audience appeared to more enter through the side door-rock, metal and hip hop fans joined more hard core jazz fans in the collective audience. The band was covered largely by the jazz press, and appeared in jazz venues, but as well began opening for major rock acts and performing in rock clubs such as Neumo's in Seattle. The alternative press discovered them as well. Young audiences seemed to be drawn by Icasiano's trance-like forays into the unknown, and the sheer energy of his playing.

"The way Bad Luck started actually was that we would get together, we would just play duo. Initially we were playing standards, or arrange standards just as a fun thing to do.That was the inception of it. We quickly realized that's not necessarily the audience that wants to hear Bad Luck, unless they're specifically interested and like avant-garde, free jazz. And what we found is that we actually fit really well playing with rock bands. Rock bands, Noise bands or just things that are on the fringes as well, because all those people are interested in the kinds of sounds that we're making, and whether they recognize that it comes from jazz or not is kind of irrelevant," he says.

There was a definite sense of community developing between Icasiano, Welch and like minded musicians in Seattle. The scene needed a clubhouse, much as the more straight ahead jazz scene in the city had in Belltown with Tula's. Ten years ago, Icasiano helped start a Sunday night hang at Cafe Racer in the Ravenna neighborhood of North Seattle. A neighborhood coffeehouse, the vibe was relaxed, with an emphasis on creativity in whatever form it may take. The result has been a ten year run of "The Racer Sessions" that is specifically archived with recordings.

The free improv sessions actually began at the iconic Blue Moon Tavern, and moved to Racer, at the time, a hang for a very interesting crowd. Upon learning of the jam ending at the Blue Moon, Icasiano knew it was time to make things happen if the sessions were going to continue. Racer seemed the logical answer both practically, and in a creative, collective sense.

" At that time, Cafe Racer was a hang. There was a lot of weirdo artists, like circus people. Trad musicians who just were kind of living on the fringes really well, that's where they hung out all the time. And there were a number of regular performances that happen, like Circus Contraption. They played every Thursday night. All Of my friends were playing there on a regular basis, so we're just there all the time," he recalls.

Icasiano's latest project explores the complexity of cultural identity, as he connects with his heritage as a second generation Filipino-American immigrant. Provinces (Origin, 2020) is a two suite piece composed on drum set. He utilizes rhythmic patterns that evoke visual imagery and audible melodies. Icasiano as well creates a sonic undercurrent with keyboards and percussion to add color and texture. Field recordings from his first trip to the Philippines are present as well, adding sounds that transport the listener to ancestral memories so distant, yet so near.

Icasiano's trip to the Philipines actually occured after he recorded the initial tracks. He had written from his life here in Seattle, with his family history firmly in mind. His trip to his ancestral homeland was a source of great clarity and inspiration.

"It's the trip that I had been thinking about for a long time, something I needed to do.I really just had to have an open mind, knowing that it will be really challenging. I learn a lot of things and I meet family and it'd be overwhelming. I was ready to be there and absorb it. I didn't really have any kind of intention wanting to learn this or wanting to make this connection, I'm going because I just want to see this place and experience it. I mean, there was a moment when we went out to the town where my mom was born and grew up, where she lived as a kid. And I remember being there and thinking that this place is so drastically different from anything that I have experienced in my life. Having that connection to a place that is so different felt very meaningful," reflects Icasiano.

Provinces as well is Icasiano's debut as a solo artist in the truest sense of the word. Creating a work for solo drum set, and releasing it on a highly regarded label is an accomplishment in itself. While he has spent his entire career being part of a whole, the ultimate musical team player, the one to lead others into creative spaces, he now forays into the uncharted regions of his own understanding of self. It tells his story, and how it connects with the stories of his ancestors. The narrative is his to tell.

"It's not like it's a linear narrative, the music isn't specifically representative of this experience. I'm putting out without having to think of anyone else in the process-this is my project, right?"