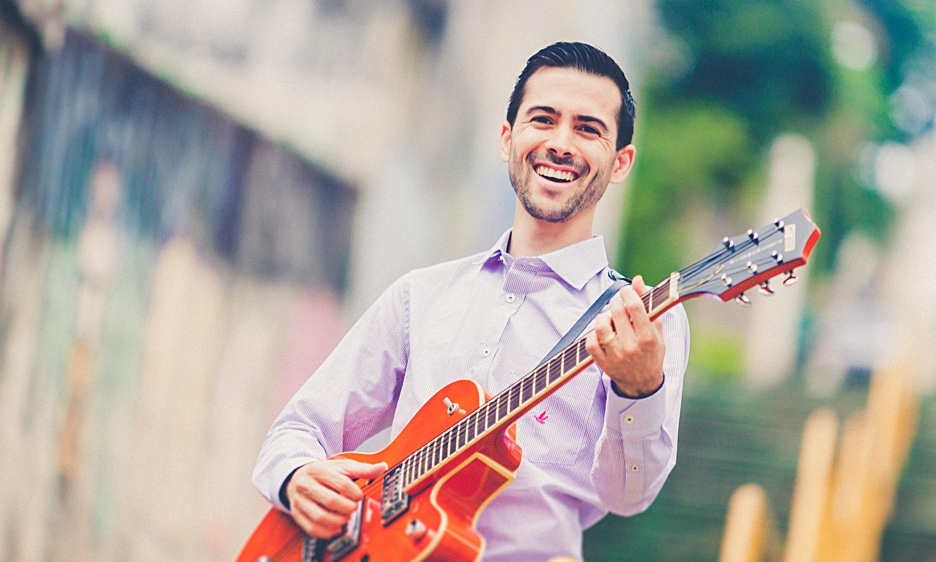 One of the most prominent guitarists in the current Brazilian jazz scene.
—Samuel Quinto FRSA

André Peloso, one of the most prominent guitarists in the current Brazilian jazz scene, tells us a little about his career as a composer. He also lets us know more about his musical influences and what it was like to record his successful album Na Escuta (Self Produced, 2018).

All About Jazz: Recently your music was featured on the track of the day here at All About Jazz. Talk a little bit about this song.

André Peloso: It was a very good thing to be able to show a little bit of my work on a website with the projection and tradition of All About Jazz. The song was a samba that I composed and that is the first song on my CD called Na Escuta, a work with an emphasis on Brazilian instrumental music recorded by the Quartet André Peloso. In this composition, full of chromatisms and thought over a 12 bar blues, I was able to explore a fast time, unusual harmony for the style and also arrangements of phrases for the band in the introduction, as well as in the later repeating of the theme.

AAJ: How did your passion for music start?

AP: I started unpretentiously to play the guitar and soon looked for a teacher. I was interested in learning the songs I had fun playing with friends and at church. In my teens I decided that music would also be my profession and I dedicated myself to deeply studying the guitar in different musical styles. Soon after, I started working as a guitarist in club bands and I never stopped.

AAJ: Talk a little bit about your solo project.

AP: I had a really cool experience in gathering musician friends to record eight of my songs. I decided to do crowdfunding to finance the recording and filming of the CD and to my surprise, I got a great response from the audience. As for the name of the group. Quartet André Peloso, I played with the initials QAP which coincidentally means "I'm listening" in the language of radio operator and is used to start a dialogue. As it was my first CD I decided to add the name "Na escuta," suggesting a conversation with the audience that is receiving my first compositions.

AAJ: How is your writing process?

AP: I always had the need to compose music and write poetry in a more unpretentious way, but when I started my professional musical career, I took it more seriously. It was then that I realized that I already had enough compositions to record an album and decided to do it to consolidate that musical phase. When I start a composition, I tend to think in terms of sound exploration. I work on that idea until I reach a point that satisfies me and sometimes I dedicate it to someone or a situation.

AAJ: Who plays with you in the quartet?

AP: The quartet is formed by Gibson Freitas on acoustic bass, Edson Silva on drums, Fabio Oliva on trombone, and myself on guitar and electric guitar.

AAJ: Why did you choose the trombone to compose the quartet?

AP: I really like the sound of the trombone, the history that Brazil has with this instrument and the sound legacy of big names like Raul de Souza, Astor Silva, Zé da Velha and Vittor Santos. Also, I thought about how the range on the trombone is similar to that on the guitar and that would sound great with my compositions. Finally, Fabio Oliva is a great trombonist and friend who contributed a lot to this project with all his musical experience coming from André Marques Sexteto, Hermeto Pascoal Big Band, Laércio de Freitas among others.

AAJ: Tell us about the process of recording the album.

AP: It was a great joy to record in a very good studio and with an incredible technician. We went to the countryside of São Paulo to Thiago Monteiro's studio. He knew how to capture fantastic sounds from each instrument, in addition to providing a very pleasant environment at the time of the recording and production. Thiago made a very careful capture and tasteful mix of the entire album. Only the song "Pro Dani" was captured by a friend, Pedro Santos, in the living room of his house in the northern part of São Paulo, and this was the only track that was not recorded by the quartet. I invited my friend and composing partner, saxophonist Roohari, to record in a duo and to complete it, the mastering was done in New York by the renowned, Dave Darlington.

AAJ: When did you first develop an interest in Brazilian jazz?

AP: I had already studied a little bit of Brazilian music at the conservatory and played some themes but my heart truly beat differently when I met the music of Elis Regina and the so-called "fantastic quartet" formed by César Camargo Mariano, Hélio Delmiro, Luizão Maia and Paulo Braga. From then on, I studied the solos, harmonies, melodies and phrases that these fantastic musicians left us as a gift. After that I got a Bachelor of Music, specializing in the guitar, and that was when I definitely immersed myself in the jazz universe. There I had classes with great musicians and fantastic teachers like Bob Wyatt, Djalma Lima, Aída Machado and Vitor Alcântara. At the end of the course I was fortunate to pass an audition for the only guitarist spot for the Orquestra Jovem Tom Jobim, which is the youth orchestra of the State of São Paulo.

AAJ: The Orquestra Jovem Tom Jobim performs concerts with great names in Brazilian music. How was your participation there?

AP: It was a very important moment for my musical, professional and personal learning. During that time I got to know and share the stage with fantastic musicians who are a reference for several generations like Rosa Passos, Laércio de Freitas, Gilson Peranzetta, Roberto Sion and Os Cariocas. The experience of playing in an orchestra brought me many benefits, such as knowing how to listen and play along with the other instruments, responding to the directing of the different conductors and often being silent, which is a difficult thing for a musician with an instrument in hand. (laughs)

AAJ: So tell me about the guitarists who have influenced you?

AP: Certainly, in Brazilian music, my biggest influence was Hélio Delmiro. It was a real obsession, getting to know the tones, shows, the set up and everything that came up about him. The way he plays the acoustic and electric guitar is unique and impressive. I had the honor of participating in his workshop and then being able to sit at the same table and talk a little bit about records, guitar and curious stories about Brazilian music. My other great influence is Wes Montgomery. His ability to improvise and create melodies at a high level made me study more and more. The quick phrases in octaves, the compings with an absurd swing but without disturbing the soloist, and the expression he developed in his playing are still fuel for my studies and goals. I could talk about countless current guitarists that I like to listen to and research like Chico Pinheiro, Djalma Lima, Nelson Veras, Pat Metheny, Peter Bernstein, Bruce Forman, Vinicius Gomes and Julian Lage.

AAJ: Tell us a little about your involvement with Music Education? How did you get into that area?

AP Currently I also work with children's music with children from 1 to 8 years old. I started teaching these classes without much pretension but I ended up discovering a new world within the musical universe and now I am developing a whole project focused on this area. In this project my object of research and development is to treat music as a language and to be able to teach it in a playful and fun way so that the child learns the skills and the fundamentals of music without realizing it. My challenge is to create my own methodology using as tools: stories, music, crafting, games and plays.

AAJ: What does the future hold for you and the quartet?

AP: I'll keep writing a lot and soon we will have new songs. I intend to release some singles with a sound that is a little different from the first album, resulting from the studies and influences that I have been discovering since then. I have an increasing joy in studying and discovering new ways of perceiving, playing and making music. It is a universe of possibilities that changes at every moment and without a doubt, this is what I love to do.