Brazilian jazz guitar player and composer, Vinicius Gomes is releasing 2017 his first album named "Resiliência", only with original compositions, dedicated to the dialogue between brazilian music and modern jazz. Vinicius has worked with artists from different styles, such as Zizi Possi (working as guitarist and arranger for her current show, "À Flor da Pele"), Rosa Passos, Jane Duboc, Arthur Verocai and Oswaldinho do Acordeon. He also works constantly with instrumentalist like Toninho Ferragutti (recording the "A Gata Café" album, winner of the "Brazilian Music Award 2017"), Thiago Espirito Santo, Robertinho Silva and Mestrinho. Vinicius also works as a freelance musician with orchestras such as OSESP (São Paulo Symphony) and Jazz Sinfônica of SP - Brasil. He possesses a Master's Degree from ECA/USP (São Paulo University), where he wrote the dissertation "Helio Delmiro - Solo Guitar Compositions", winning the PROAC Award (2015) on the instrumental music category Vinicius is also constantly participating on records by musicians on São Paulo's jazz scene like Daniel de Paula, Ludere (with Phillipe Baden Powell), Guilherme Ribeiro, Banda Urbana, Rafael Abdalla, Alexandre Silverio,and is one of the leaders of the "KVAR" quartet. He has had the opportunity to tour extensively inside Brasil and play in contries like Finland, Sweden, Argentina, Colombia, Uruguay and Paraguay. 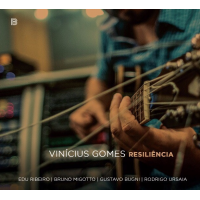 All About Jazz musician pages are maintained by musicians, publicists and trusted members like you. Interested? Tell us why you would like to improve the Vinicius Gomes musician page.