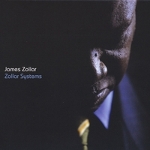 It is an unfortunate fact that trumpeter James Zollar is nowhere near as well-known as he should be. But that may be about to change. Zollar Systems may be about to put Zollar in an orbit all his own. A genuine renaissance man of the horn, Zollar is a singular voice on the instrument that is jazz music's vanguard accouterment—the one that heralded the legend of Buddy Bolden and those of Joe Oliver, Louis Armstrong, Jabbo Smith and Bubber Miley, and other pioneering ambassadors of the music, from Fats Navarro and Clifford Brown to Clarence Shaw and Dizzy Gillespie, Miles Davis and Wynton Marsalis—down to a handful of other trumpeters playing today.

Zollar might easily claim to be a direct descendent from any one of those men. But in the raw sophistication of his intonation there is a classic recollection of the blues-inflected tones of Navarro and Brown. In his ability to utter a memorable phrase with sound and silence conjoined to bring ideas to fruition he is like the iconic Clarence Shaw. At times Zollar can growl magnificently, and then the ghost of Miley reappears. But mostly the wondrous voice is Zollar's alone—soaked in the blues, plaintive and joyful, as germane to his environment as pure the pure sound of air rushing or cruising through brass itself.

That Zollar is a rare bird may be heard in any one of the memorable tracks on this album. On the snorting opener, "Chicago Preferred," a chart that rocks like a classic bebop song, Zollar soars like a great bird in flight. On the simple ruminations of his wife and vocalist, Nabuko Kiryu in her bluesy, "Take the Subway Home," a seemingly simple-minded send up of the suggested unwinding after a particularly brutal day, the trumpeter is the voice of arousal. On Hoagy Carmichael and Ned Washington's gorgeous ballad, Zollar prays with miraculously husky sensuality. His mystic intonations come closest to the true meaning of suggested bliss, as he works the melody of the song in his first chorus, and then turns it inside out as his staggering lines of improvisations unfurl verse-after-verse of the song.

Zollar's unstoppable force continues through the sharp incline of Eddie Harris' "Spasmodic Movements" and Kiryu's spiritually sublime, "Go-En," which appears to be the glue that binds Zollar to his music and his life. His own moves are like greased lightening on his composition, "Slick" and he—together with Japanese mezzo-soprano, Sahoko Sato—turns the operatic "A Time to Say Goodbye" into a thrilling encounter between the human voice and Zollar's Miley one on trumpet.

It would be remiss not to acknowledge the sublime work of Don Byron, who beams in and out on clarinet, on "Spasmodic Movements," and saxophonist Stacy Dillard's supporting role, as well Rick Germanson's intricate pianism (a mature accompanying role beyond belief) on this most memorable album from Zollar.