Yusef Lateef: Celebrating 75 Years of Music at Roulette in Brooklyn 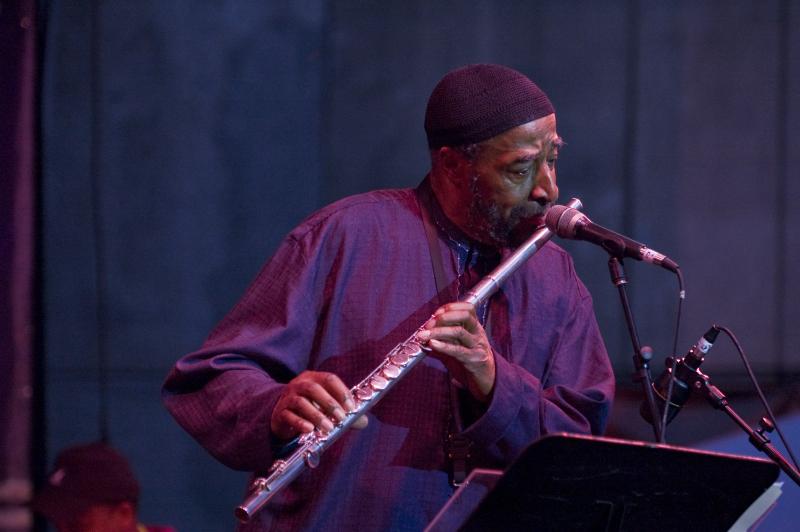 By Scott Krane
April 9, 2013
Sign in to view read count
Rarely in the history of contemporary American music has one artist iconized as many aspects of organized sound as Yusef Lateef who appeared in Brooklyn, New York on Saturday night, April 6, at the new Brooklyn version of the Manhattan performance space, Roulette, near the new Barclay's Arena. In a two-hour performance billed, "Yusef Lateef: Celebrating 75 years of music," the 92-year-old remnant of modern jazz displayed the breadth of his musical imagination in a four-part concert.
The Grammy Award-winning musician began recording on Impulse Records in the first half of the '60s, and Savoy Records in the decade before. But the sounds heard in Brooklyn on Saturday night seemed more than a stone's throw away from the style heard of Lateef in the '60s. It has been widely held in the jazz world that Yusef Lateef who converted to Islam around the time he began performing in Dizzy Gillespie's big band in the '50s, had a major influence on fellow Impulse recording artist, John Coltrane, both in terms of the incorporation of elements of Eastern and world music in the jazz of the day, as well as for the atonal and harmonically-out 'free jazz' that Coltrane was to explore in his sheets of sound phase and last studio and live recordings for Impulse.
Yusef Lateef was also famous in the 1960s and '70s for his distinct style on flute and saxophone that was deeply soulful, pulling from both blues and gospel inspirations. Some of his studio recordings as bandleader have been tagged as 'acid jazz.' In addition to this, he has also recorded on Prestige, Verve and Atlantic records. Lateef, who has also been a writer of fiction and nonfiction, a visual artist, a music professor and an innovator of a spiritual movement known as autophysiopsychic music, appeared in Brooklyn, New York, performing written music for a string quartet, a saxophone trio, a solo piano and finally, an improvised duet for himself and percussion, to a full house at Roulette, a double tier performance space in Brooklyn.
The Momenta Quartet who tweeted on Sunday, April 7: "Morning after Yusef Lateef concert: still inspired by the words and music of this wonderful man!" performed the opening of the concert that began at around 8:30 p.m. Saturday night and lasted until around eleven o'clock. Momenta Quartet—Adda Kridler and Emilie-Anne Gendron on violin; Stephanie Griffin on viola and Michael Hass on cello—have been widely acclaimed for their original music and collaborations. They opened the night with a three-part suite of discordant, contrapuntal sections written by Lateef: it was the world premier of "String Quartet no. 2012."

This portion of the night was followed by multi-wind player J.D. Parran, in concert with jazzman Allen Won and the celebrated virtuoso, Marty Ehrlich, who answered the Momenta Quartet's atonal and tripartite offering with another three sections of written music by Yusef Lateef: "Trio in December 1998" (its New York debut). In these numbers, the harmonies have changed to offer a palate of more intelligible sounds. Here, unlike the strange opening sections by the Momenta Quartet, at least harmonic minor statements are made, breaking up the algae of whole tones galore.

During these parts of the performance, Yusef Lateef was found sitting in the center of the front row beside a woman draped in a burqa, observing from the view of the spectator. Sitting in the best seat in the house, Lateef appeared to be mentally locked into the intersection of the action on stage and the happenings about in the cosmos.

Ehrlich, who played alto saxophone, J.D. Parran, who played soprano saxophone and Alan Won, who played baritone sax, were followed by a performance by the world renown Taka Kigawa on piano, who played the world premiere of Lateef's "Autophysiopsychic (variations for piano) 2012." This piece was a single work of aleatory music. The solo piano offered dissonant chordal blocks swimming in atonal ambient space. It was a shadowy number at a freer and slower tempo than the tempi of the music performed earlier in the evening.

The harmony bounced in and out of tonal logic, giving the listener sound bytes of both chaotic clusters that cause the hair to stand on end and creamy sonic textures. Since Taka Kigawa only played one piece, the Momenta Quartet, three pieces, and Parran, Ehrlich and Won, an additional three pieces, seven was the number of musical sections that made up the first half of the concert cycle.

After a brief intermission, Yusef Lateef took center stage in the sophisticatedly illuminated Roulette that opened in Brooklyn only a short while ago, and performed a long improvised duet with Adam Rudolph. An animated and healthy looking Yusef Lateef played tenor saxophone, oboe, C flute, bamboo flute and pneumatic bamboo flute, a moan flute, an alto flute, a shenai; strange vocals, and even made a brief cameo at the piano.

The world music pioneer, who has in the past decades rightfully garnered many accolades, Adam Rudolph performed on a hand drum set, for most of the performance. The drum set consisted of zabumba, tarijas, djembe and kongos. He also displayed his mastery on such obscure instruments as sinter, cajon, thumb pianos, bells, cup gongs, a kongo slit drum, a selya overtone flute and cymbals.

As the music proceeded, the experiment gradually sped up in tempo. At one point, Lateef recited spoken-word poetry, while percussionist Adam Rudolph sat at the piano using aleatory chord voicings as a percussion instrument. The poem featured a refrain, "We will still have Providence to call on!"

Afterwards, the religiously acoustic performance took jabs at the puritan air when electronic samples and tape loops were heard, subtly and very sporadically. Then a recording became a low-pitched drone, replete with great rustic textures. The teleological structure, or the lack thereof was an important theme throughout the night. The penultimate section of music performed by Yusef Lateef in the flesh was a bluesy call-and-response vocal improvisation against the background of a didgeridoo drone.

Whereas the second half of the evening featured music that slipped in and out of defined rhythm that was devoid of harmony, the first half of the evening, where Lateef was not actually performing on stage with an instrument, showcased music that seemingly had no rhythm but cleverly snaked in and out of harmonies. So the selections were a fascinating musical inversion.

Sonny Rollins once said that Yusef Lateef is "a beacon of inspiration to the music world." Saturday night's performance was a clear showcase of this gift.

Scott J. Krane is a popular blogger and critic