By Glenn Astarita
April 10, 2013
Sign in to view read count
Track review of "Inside the Gloves" 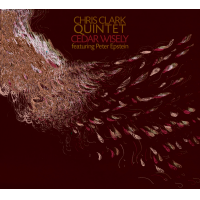 This quintet was assembled for the recording of this album by young saxophonist Chris Clark, incorporating the talents of veteran saxophonist Peter Epstein who is also the department head for the University of Nevada, Reno where Clark also studied. With his debut effort as a leader, Clark enacts a concentrated focus on the compositional aspects, and largely executes a bottom-up mode of operations, instilled with mood-evoking themes, spanning multiple musical influences. The bulk of the program is based on probing motifs amid intermittent sequences that sport climactic build-ups.

"Inside the Gloves" is the most impacting piece on the album along with apparent nods to Ornette Coleman, primarily from a rhythmic design perspective. Here, the band soars into hyper-mode, spurred by drummer Jesus Vega's spunky and highly energized pulse, as pianist David Ake encircles the primary theme via cascading lines and a loosely formulated bop approach. The plot intensifies as Clark flirts with the freer realm, tinted by a soulful outline and brazen line of attack. Vega stretches out and brings the unit back to the buoyant, storyline for the finale. Indeed, Clark parlays a great deal of promise throughout this ardent engagement, perhaps signaling that the best is yet to come.