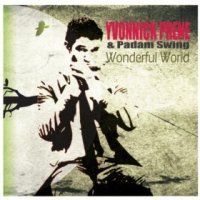 Before arriving in New York in 2007, Paris-born harmonica player Yvonnick Prené had already gained schooling of the practical kind, touring and recording with pianists Laurent Cugny and Yaron Herman, and trumpeter Alex Tassel. Prené hit the ground running in the States, winning several scholarships that enabled him to study with saxophonist Lee Konitz, bassist John Patitucci and guitarist Peter Bernstein. His stylistically diverse debut, Jour de Fete (Steeplechase Records, 2013) mixed up classic tunes with original compositions and announced the arrival of a real talent on an instrument rare in jazz. Wonderful World doesn't significantly break the mold but it's nevertheless another hugely enjoyable, sophisticated offering.

Most of the tracks are played as a trio or quartet, with bassists Lorin Cohen and Eric Wheeler sharing bottom end duties. Prené tackles Bob Thiel and George David Weiss' "Wonderful World" without deviating too far from trumpeter/singer Louis Armstrong's vocal cadences. Nevertheless, it's as lovely an instrumental version as you're likely to hear, with Valeanu shining on a delightfully emotive solo. Antonio Carlos Jobim/Newton Mendonça's "Desafinado" is lent a little rhythmic oomph by drummer Jay Sawyer and Cohen's swing. Mike King 's piano solo seems a little pedestrian in comparison with Prené's greater dynamism, the harmonica player demonstrating his considerable chops in a stirring finale.

Prené contributes two original compositions, the Django-esque "La Valse de Amy," where he dovetails nicely with Tixier and the altogether more personal-sounding "The Swimmer." This latter, highly melodic number—driven by an infectious guitar-led groove—features sparkling improvisations from Prené and Valeanu and bears all the hallmarks of an instant classic. Prené's inherent lyricism is to the fore on slower numbers like bassist/bandleader Charles Mingus' bluesy "Duke Ellington's Sound of Love" and a faithful rendition of bassist/singer Sting's "Shape of My Heart." The leader solos beautifully over Wheeler's walking bass on a gently buoyant version of pianist Horace Silver's "Strollin.'"

There's collective panache in Gerald Marks/Seymour Simons' much covered 1931 standard "All of Me," with Prené, Valeanu and Tixier all unleashing brief but feisty solos. A gypsy-jazz take on saxophonist Sonny Rollins' "Pent-Up House" swings as hard as the original, with Prené and Tixier once more in inspired form.

The warmth of Prené's tone, his virtuosity and the group's collective joie de vivre means that even tunes as old as the proverbial hills sound fresh. Prené, like Thielemans, is a wonderful interpreter and he could probably knock out a few more of these without breaking sweat. If, however, he can hone his own writing skills then he could yet carve a truly unique place for himself and his instrument.

Coquette; What a Wonderful World; Desafinado; La Valse d’Amy; Strollin’; Shape of My Heart; Troublant Bolero; All of Me; Duke Ellington’s Sound of Love; The Swimmer; Pent-Up House.