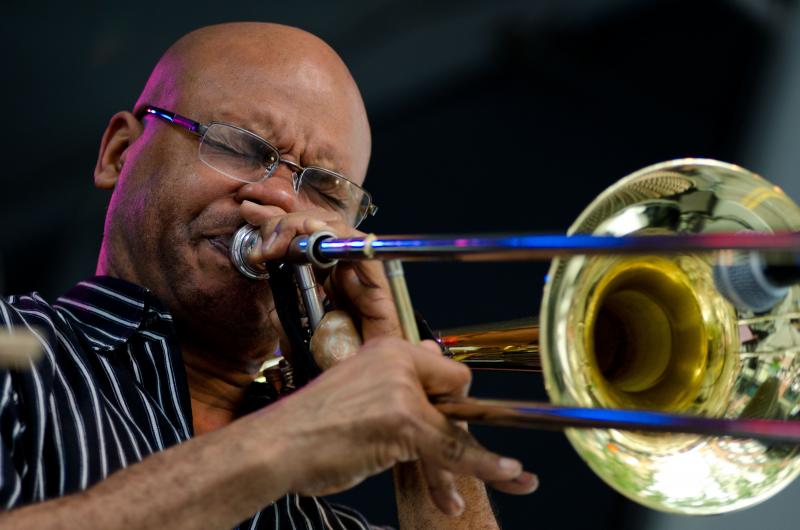 With its modest beginnings back in 2011, the Pittsburgh JazzLive International Festival had nothing but an uphill battle in terms of sustaining a free jazz festival. It took a billion dollar endowment to keep North America's largest free jazz festival in Detroit running in the black. Odds were not with Pittsburgh, but the powers that be and festival director Janis Burley Wilson seem to be on to something quite special that is starting to establish a track record.

Along Penn Avenue in the cultural district, streets are closed off to make way for three stages, two at opposite ends for the live performances and one on a side street boasting a deejay. It's the laidback atmosphere and ability to get up close and personal with the artists that lends such an organic element to the entire experience. Add to that the short walking distance between stages and the non-overlapping schedule and you have the makings of a great experience. Bonus features also included a store for vinyl purchases from several dealers and a jam session each night after the last set.

This year the festival moved its early June slot forward a few weeks which seemed to be a boon to attendance and a bearer of fine weather. Events kicked off on the evening of June 20th with a performance by the genre hopping group Snarky Puppy. Saturday's offerings, which are recapped here in detail, were steeped in the mainstream jazz tradition. Things then wrapped up on Sunday the 22nd (not reviewed here) with a focus on the Latin musings of El Gran Combo and Raul Midon. Furthermore, a forum for the vocalists came with sets by Allan Harris and Dianne Reeves.

Saturday's festivities began with a tribute to the great jazz harpist Dorothy Ashby by the fabulous Brandee Younger. As she explained in her introduction, even if you are not familiar with Ashby, you've heard her work on scores of popular radio hits from the likes of Stevie Wonder and Earth, Wind, & Fire. Younger and her quintet stuck closely to Ashby's '50s and '60s recordings for Prestige, Riverside, and Argo while offering new outlooks on some unjustly overlooked gems. Ashby often voiced her melodies for harp and flute and Younger did the same with Sharel Cassity on flute and Chelsea Baratz's tenor filling out Brandee's front line.

Both "Afro Harping" and "Wax and Wane" displayed Younger's many assets as a performer, ably supported by bassist Rashaan Carter and the great drummer E.J. Strickland. In lesser hands, the harp is decidedly an unwieldy instrument, but Younger's improvisations spoke with clarity of purpose while telling a story. A highlight of the set was the band's take on Alice Coltrane's "Blue Nile." The bass vamp set up an enchanting trance-like state that Younger and Cassidy further explored. Also worth mentioning was Baratz's tenor sax, which roared full steam at several times throughout the set. The sum was a mature performance that surely added several loyal followers to Younger's in-crowd.

Up next was The Messenger Legacy led by powerhouse drummer Ralph Peterson and featuring all former alumni of Art Blakey's Jazz Messengers, the eldest being bassist Reggie Workman. Filling out the rhythm section would be the sadly underrated Donald Brown on piano, who generated more than his fair share of steam in competition with Peterson and the incendiary front line of Billy Pierce, Brian Lynch, and Robin Eubanks. Flanked by a bank of toms and a plethora of cymbals, Peterson was barely visible behind his kit as he led the charges through some of the most iconic pieces in the Blakey repertoire.

Two chestnuts from the Messenger's Riverside Records era provided the opening gambit. "One By One" and "On the Ginza" were powerhouse statements which found Billy Pierce roaring out of the starting gate with some of his most incendiary playing to be heard in recent memory. Benny Golson's "Blues March" received an excellent send off with Ralph's military drum licks cooked to perfection and Workman providing a rare, but eloquent bass solo.

The set's centerpiece would be Freddie Hubbard's fiery "The Core," which found Robin Eubanks kicking off the solo order in fine fashion. Then Lynch would tell a story as he developed a phrase built around his quote of "It Ain't Necessarily So." Donald Brown would go to church with his two-fisted chords a la Phineas Newborn on the iconic "Moanin.'" As the crowd rose to their feet, Peterson launched a one-man encore with a solo that managed to get in each and every one of Blakey's signature drum licks. It was a fitting conclusion for this presentation that is in need of wider exposure and recognition.

Later in the afternoon, vibraphonist Joe Locke would wow the crowd with his virtuoso performance augmented by the vocal stylings of Kenny Washington. Kenny and Joe make for the perfect yin and yang, not only in the differences between their physical statures, but also in their creative muses. While Locke speaks with bebop swiftness and in elongated phrases, Washington is grounded in the roots of soul and R&B. Think or a lighter and fleeter version of Arthur Prysock and you've got a good starting base.

Jazz standards like "Old Devil Moon" and "Laura" mixed well with an extended take on "Ain't No Sunshine," with Washington effortlessly scatting up a storm. He would then break it down on the line "I know, I know, I know..." with drummer Jaimeo Brown kicking in a strong backbeat. In fact, Brown's musicality and strong drum solos throughout marked him as one of the finds of the day. Casting quite the spell, Locke's dedication to the late Bob Berg came in the form of the undeniably beautiful "Verrazano Moon," which also featured Ryan Cohan's eloquent piano. A star studded group with impeccable credentials, Locke and company made many friends in Pittsburgh with their set.

For the appropriate party atmosphere needed to close out the evening, the festival shifted to a presentation entitled "Jazz Meets Funk" fronted by the immensely talented trumpeter Sean Jones and local bass guru Dwayne Dolphin. They kicked off their generous set with the Jaco Pastorius nugget "The Chicken," drummer Poogie Bell wasting no time in setting up the groove that would propel the performance for almost two hours. Touching on material from The Meters and The Gap Band, Jones and front line partner Tony Watson on tenor saxophone worked the crowd, while simultaneously offering food for thought with solos that touched both the heart and the mind.

It would be well into the set when the iconic Fred Wesley would finally take the stage, but he wasted no time in furthering the cause, launching into a spunky "House Party." His singing was spirited and his trombone lines were as tart and funky as ever. Watson proved to be a real crowd pleaser as well, his strident tenor voice shedding any doubt of his abilities to bring the goods since he often dabbles in lighter fusion fare. Then with the jam session moving across the street to a local bar, the vibe would extend long into the early morning hours.