Donald Ray Brown was born on March 28, 1954 in Desoto, Mississippi. At the age of two, Brown and his family moved to Memphis, Tennessee. Donald came from a musical family, which instilled a love of music in the young boy. His first foray into music included early stints on the drums, baritone horn and tuba. In the ninth grade, he began to play the trumpet and showed a great deal of talent on the instrument, winning several awards for his abilities. Brown’s first musical mentors were his cousin Lloyd “Stan” Anderson, a gospel pianist and his sister Waddia, who was a gifted singer and pianist

19
Article: Out and About: The Super Fans

Our youngest Super Fan to date, and our first from the west coast, James Busby was weaned on the popular music of the '70s and '80s. His first jazz concert--Donald Brown at a local club in Knoxville, Tennesse for a $3 cover--was life-changing. He may not have discovered jazz until he was in college, but ever ... 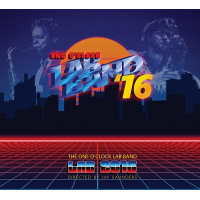 The year ending in May 2016 was quite an eventful time for the University of North Texas' flagship One O'Clock Lab Band. Besides hosting regular concerts and clinics in Denton and the surrounding area and holding its three yearly performances in Fort Worth, the band welcomed acclaimed drummer Dennis Mackrel as guest artist for its fall ...

Lu Olutosin, aka 'Sweet Lu,' is an innovative vocalist based in the Washington D.C. area. Olutosin served for thirty five years in the Military as a Police Officer and archived the rank of Colonel. Upon retiring from the Military, Olutosin found that his calling to be a jazz vocalist was still as strong as it was ...