Donald Ray Brown was born on March 28, 1954 in Desoto, Mississippi. At the age of two, Brown and his family moved to Memphis, Tennessee. Donald came from a musical family, which instilled a love of music in the young boy. His first foray into music included early stints on the drums, baritone horn and tuba. In the ninth grade, he began to play the trumpet and showed a great deal of talent on the instrument, winning several awards for his abilities.

Brown’s first musical mentors were his cousin Lloyd “Stan” Anderson, a gospel pianist and his sister Waddia, who was a gifted singer and pianist. Upon graduating from high school, Donald enrolled at Memphis State University (now the University of Memphis) on a trumpet scholarship, but he quickly switched to the piano. While attending college, he was persuaded to study jazz by his friend and classmate pianist James Williams.

At Memphis State, Brown gained considerable performance experience as a member of the Memphis Three, a trio of outstanding pianists who passed through the university in the 1970s including Williams and Mulgrew Miller. During this time, Donald began to build his résumé by doing studio work for Stax Records owner, Jim Stewart and Hi Records owner, Willie Mitchell.

Brown used his time in college to sharpen his composing and arranging talents by writing for the university jazz band. Upon finishing his studies in 1975, Donald performed locally before replacing Williams in drummer Art Blakey’s Jazz Messengers in the summer of 1981. The band at the time included trumpeter Wynton Marsalis, saxophonist Branford Marsalis, tenor saxophonist Billy Pierce and bassist Charles Fambrough.

With Blakey, Brown toured both domestically and internationally. In January of 1982, he recorded the album Keystone 3 with Blakey at the Keystone Korner club in San Francisco. The album reached number thirty-one on Billboard Magazine’s Top Jazz Album Chart. The talent of the ensemble can be best heard on the album’s closing number, “A La Mode.”

With the task of blending three horns together, Brown provides a firm harmonic underpinning by comping in between the spaces of the horns, resulting in a more cohesive and robust sound. Brown's solo exudes a melodic sophistication and a tight, lyrical voice which which easily united all of the instruments of the ensemble.

The same year, Brown appeared with Blakey on the video Jazz at the Smithsonian: Art Blakey and the Jazz Messengers, a taped concert that was filmed at the Baird Auditorium at the Museum of Natural History, Smithsonian Institution in Washington D.C. After a year with the Blakey group, Donald left the group due to a bout of rheumatoid arthritis. He moved back to Memphis where he began to pursue more studio-oriented work.

In 1983, Brown accepted a teaching position at the Berklee School of Music, a position he held until 1985. While at Berklee, Donald taught several noted musicians including pianists Cyrus Chestnut, Danilo Perez and soprano saxophonist Sam Newsome. While teaching full-time, he also remained active as a composer. In 1986, Wynton Marsalis recorded Brown’s composition “Insane Asylum” on the album J Mood, which earned Marsalis a Grammy Award nomination in the “Best Jazz Instrumental Performance, Soloist” category.

In 1988, Brown took a teaching position at the University of Tennessee where he began to lead student ensembles and teach jazz history courses. Brown supplemented his teaching schedule with sideman work, appearing on singer Diane Reeves’ Blue Note album I Remember the same year.

Brown secures the ballad-feel of the piece by playing with lush ornamentations that perfectly evoke the sentimental vibrato of Nelson’s vibraphone. The way that Donald slowly builds his voicings throughout the song is as if he’s slowly opening up the harmony to new and exciting terrain. Lundy, who chooses notes and patterns that help to develop Brown’s ideas, further enhances this concept.

During this time, Brown continued to record prolifically as a sideman. 1989 also saw Donald recording with Donald Byrd on his album Getting Down To Business, where he contributed the original composition “Theme for Malcolm.” The following year saw Brown involved with several different projects including arranging and producing Kenny Garrett’s album African Exchange Student. 1990 also saw Donald performing on Wallace Roney’s album Obsession, as well as his own album People Music.

In 1993, Brown became a member of the Contemporary Piano Ensemble with pianists Harold Mabern, Mulgrew Miller, Geoff Keezer and James Williams. Originally forming after a performance at the 1991 Montreux Jazz Festival, the ensemble is made up of four pianists, with one sitting out, while performing concurrently with a rhythm section. The same year, the group recorded the album Key Players with bassist Christian McBride and drummer Tony Reedus as the rhythm section.

In 1995, Brown recorded the album Piano Short Stories, his first solo piano album. Recorded in Riom, France, the album features several original pieces as well as the popular standards “Take the A Train” by composer Billy Strayhorn and “Black Narcissus” by tenor saxophonist Joe Henderson. A shining example of Donald’s talents on the record is his rendition of the standard “On Green Dolphin Street.”

“On Green Dolphin Street” is a testament to Brown’s solo capabilities with the pianist treating the melody with insightful clarity. Donald expertly navigates the melody and makes it his own by adding subtle ornamentations and nuances. His left hand carefully controls the feel of the song, whether it is the bossa nova feel or the sections when it changes to a swing feel. The resulting song is a simultaneous tribute and re-imagining of a popular jazz staple.

On Monday, January 13, 1997, Brown performed at Merkin Concert Hall in New York City alongside Marion McPartland. In 1998, Donald appeared on trumpeter Bill Mobley’s album Live at Small’s Vol. 1. The albums were a compilation of concerts that were recorded at the New York City club in 1996.

In 2001, Brown released the album, which showcased a more contemporary sound with the addition of funk music and other styles. Donald continued his prolific recording schedule with the release of the album Wurd on the Skreet in 2002. The album featured contributions from Bill Mobley, Sam Newsome, saxophonist Manny Boyd, drummer Billy Drummond, bassist Essiet Essiet and percussionist Daniel Sadownick.

The following year, Brown released the album Autumn in New York, his first for the Blue Geodesics label. Donald’s 2004 release as a leader was The Classic Introvert, which featured twelve originals including “Suite Africa” and “Phineas.” On June 27, 2007, the Knoxville Jazz Orchestra released the album Blues Man From Memphis, featuring arrangements on eight of Brown’s compositions.

Throughout his musical endeavors, Brown has remained dedicated to jazz education. In addition to his curriculum at the University of Tennessee, Donald has been invited to lecture and teach at several academic institutions including the Juilliard School of Music and the Brubeck Summer Jazz Colony at the University of the Pacific.

Brown resides in Knoxville, Tennessee and is an associate professor at the University of Tennessee where he currently teaches piano, improvisation and jazz history. He maintains an active performance and touring schedule. Show less

Music of Donald Brown at Miller Theatre in NYC

From: The Poets Are Gathering
By Donald Brown 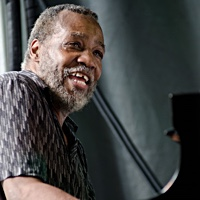 All About Jazz musician pages are maintained by musicians, publicists and trusted members like you. Interested? Tell us why you would like to improve the Donald Brown musician page.