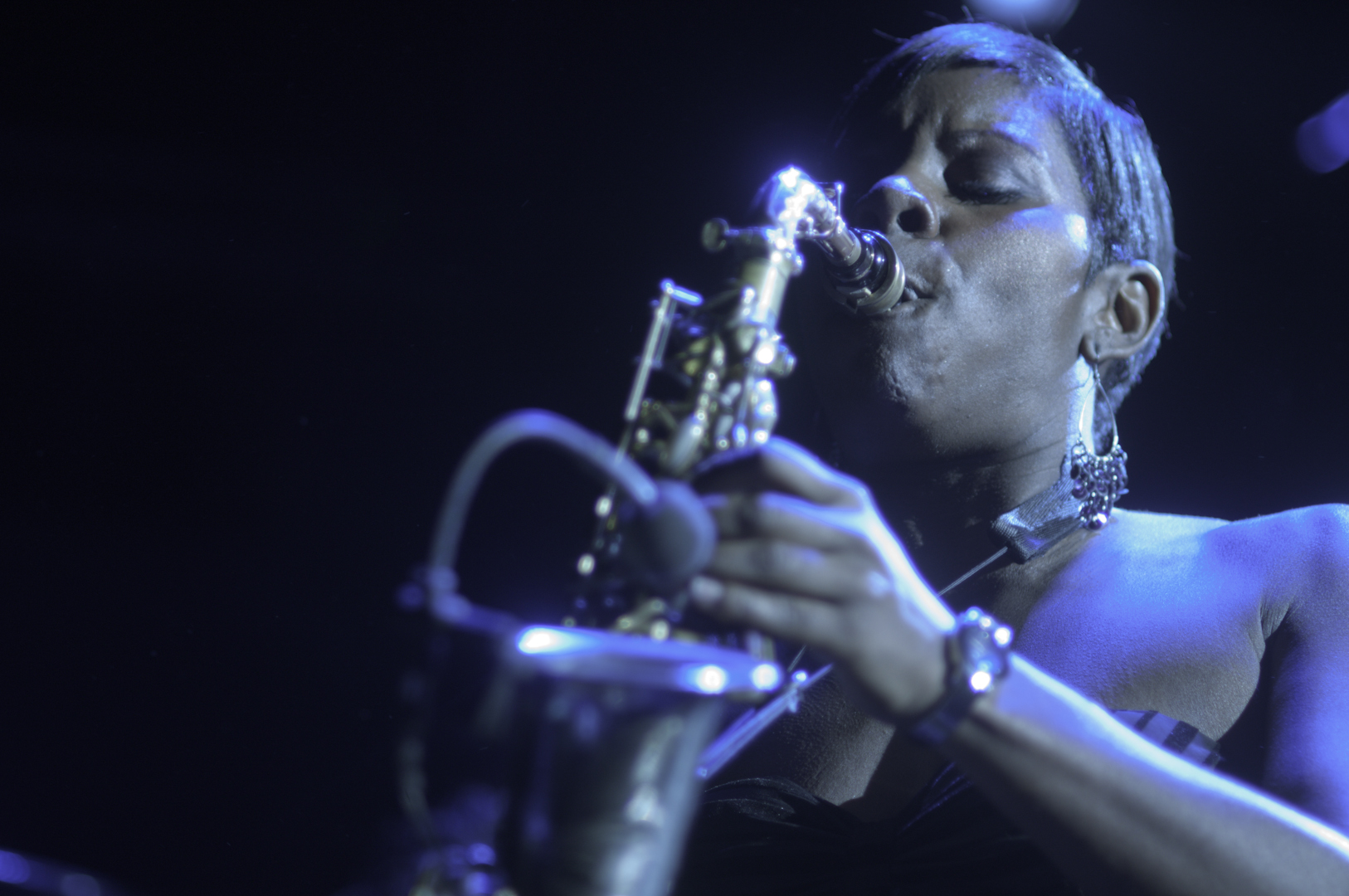 Slick and heavy electric forays characterize the work of veteran guitarist Vernon Reid. However far into space he goes, his instrument is always under control; usually, his music is as well. Artificial Afrika—featuring vocalist Akim Buddha Funk and DJ/percussionist Leon Lamont—was, however, a simmering, trippy stew of voodoo and multicolored mud. For all the mess, it was a wildly glorious experience. There were technical problems to start, with Reid's computerized hookup on the fritz, but he kept his cool as the technicians solved the glitch, and soon proceeded to unleash his odyssey.

On two screens behind stage, images with footage of old Africa blazed. "Africa, land of savagery and adventure," the type ran, followed by images of the people in sorrow in shallow waters with elephants. Then, a king in a litter—pulled in circles, at breakneck speed, by a horde of admiring subjects through the savanna. Hybrid rhythms of hip-hop and reggae raged, as Reid reined them in with searing, loping lyric lines, and Buddha Funk pranced around with a masque, singing shamanesque chants. The modulations were grand and lazily abrupt, as Reid led his unit in and out of psychedelic swamps. He ended by thanking his audience for auditing this "work in progress."

Alto saxophonist Tia Fuller has a big, scintillating sound that she controls well, pushing it into interesting and unexpected places with provocative logic. The crowds loved her, and she was certainly a force to be reckoned with. But she is still in the early stages of her game: the logic of her lines did not always fall in tandem with her band, which included pianist Shamie Royston, bassist Mimi Jones, and drummer Rudy Royston. The excitement reached highs, but ebbed and flowed. There were nice touches of grace, but she could have used more nuances of classic soul—although she has certainly assimilated Charlie Parker, whose influence escalated as the set progressed. Still, the ensemble playing was a bit too glossy. The rhythm section was excellent, but Fuller did not have them at her beck and call, as a consummate master might. Together, they were not gritty or colloidally cohesive enough.

This was clearly a unit with strength and promise, and could go places with a conscious effort to return to roots. The group very nicely disguised "I Can't Get Started" though, and was characterized by a healthy political idealism. "Moving forward with decisive steps" is Fuller's stated theme, as well as spiritual "Ebb and Flow," which was also the title of the funky final number, which showed Fuller and her group on their strongest turf. Throughout, there were nice edgy modal fragments jammed together in fine runs.

Guitarist/vocalist Doug Wamble fronted a classic bar band, with drummer Adrian Harpham and bassist Derek Nievergelt. His originals were diamonds in the rough, but he played them with such feeling and craft that they were a delight. Wamble is not about producing monumental works of art along the lines, say, of a Butch Morris. He is about making people feel a little better when they go out after work at night to relax at a club. That said, two of his covers, Hoagy Carmichael's "Stardust" and Jimi Hendrix's "Waterfall," were exquisite, romantic and glowing. "Waterfall" in particular, with its subdued but finely wrought solo, was one of the highlights of the festival.

NOMO was an electrifying jam band that played a kind of Afro-funk influenced electro-pop—but, for the most part, on acoustic instruments. Baritone saxophonist Daniel Bennett, particularly, shone. NOMO's energy never ebbed, with percussive forays rising and melding with guitar and saxophones, mesmerizing, renewing and recharging itself.

Iraqi trumpeter Amir Elsaffer purveyed a kind of Arab-jazz fusion, combined with other Eastern elements. A "So What" style intro kicked off his group's first song, evolving into something out of John Coltrane's "India." Drummer Nasheet Waits was great as always, a serpentine silence before he struck and rode the snare. Rudresh Mahanthappa sounded like an Arab-flavored Eric Dolphy, chasing his own motifs like a tail. A pumping but destabilized rhythm got brighter and went into major chord territory, with an oud break from Zafir Tawil, followed by a return to the turning theme. ElSaffer sounded like Freddie Hubbard, with touches of Miles Davis—even a bit of Charles Tolliver.

Carlo Derosa launched a bass solo reminiscent of Jimmy Garrison, but fleeter—more like Charlie Haden, perhaps. The theme came back with an African beat on drums. Hints of dissonance cropped up, as well as a time lag between sax and trumpet. There was a sound like a knock on a door, and then banging as if on pots and pans. It sounded like it was coming from Waits, but it was actually oudist Tawil, who had switched to percussion. Tawil then embarked on another oud solo, with a sitar-like quality and, for awhile, even tinges of guitarist Steve Howe, of heroic 1970s progressive rock group Yes. A brief sax solo was followed by a new theme and another sax/trumpet duet to end. 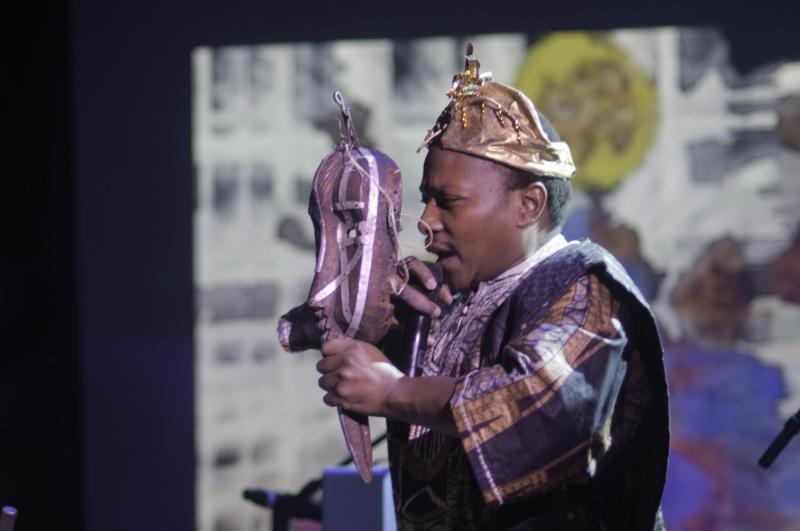 A nice post-bop solo started the next number over a pedal point. The playing was so tight and integrated that it was often hard to tell the instruments apart, despite how anomalous they were in form and nature. Amir sat down to play the zither-like santour and sing, as Waits laid out patiently behind a dark, plaintive warble. A rubato, carol-like harmonizing of trumpet and sax carried the tune forward, and eventually Waits hinted at a rolling beat that accumulated like a snowball.

Underground Horns started its set with some Latin/New Orleans fusion and a Bo-Diddley beat propelling a 12-bar blues structure. Trumpeter Mike Irwin laid down a down-home funk line to a honky-tonk refrain, backed up by trombonist Kevin Moehringer. Welf Dorr then played a hot sax solo, after which percussionist Okai's djembe took over, along with Ibanda Ruhumbika's big and brassy tuba.