Mimi Jones, multi talented bassist, vocalist and composer, brings her beacon of musical light to the world while embracing a positive future with her inspiring messages. Mimi’s elegant sound is an eclectic mix of genres based on a strong jazz foundation that leaves room for funky bass grooves, world beat rhythms, gentle textures and the soulful cries of the Wurlizter. “This music taps in directly to the senses using elements of jazz, folk, rock, blues and different sounds from around the world which have all had such a profound effect on me.”

Mimi Jones (aka Miriam Sullivan) was born in New York City and raised in the Bronx by parents that descended from Barbados and St.Croix, which explains why Mimi has so many musical influences that flow easily through her compositional style. “As a child my parents always played music around the house,” remarks Mimi, “besides their traditional roots they had tons of records from the greats like Gene Ammons, Miles Davis, James Brown, Gloria Lynn, Ray Charles, John Coltrane, Willie Nelson, Frank Sinatra, The Doors, Beatles, BeeGees, Barbara Streisand, Al Green, Michael Jackson, Earth Wind & Fire, Peter Paul and Mary. Every Sunday we had a ritual of cleaning while the music blasted through the house.” Mimi started buying her own records and showed such enthusiasm to play the guitar that her father enrolled her in the Harlem School of the Arts. There she learned the classical guitar and eventually the instrument of her choice, the electric guitar. By the age of twelve she was studying guitar with her first teacher, Jim Bartow, taking classes in dance, chorus, drums, music theory, piano and composition which all helped her secure a spot at Fiorello La Guardia High School of Music and Performing Arts. Once there she realized that the school didn’t have a guitar program so she was quickly switched to cello and placed into the orchestra. However, during cello practice time she could be found in the mirror spinning her comrade's bass and playing the “Barney Miller” theme. “I was spotted doing this one afternoon by the band director, Justin Diccioccio, and he asked if I played the bass. I said no and he responded saying “well you do now because we need a bassist for the jazz band.” “This was an exciting experience because for the first time I found my own musical voice.”   Mimi began her relationship with the bass by receiving classical lessons from Linda McKnight and attending the Jazz Mobile Workshop to study with world-class bassist Lisle Atkinson who became her first mentor and even supplied Mimi with her first bass, a Juzak. “I’ve often said that the bass chose me,” said Mimi “and there were so many early experiences that confirmed that feeling.”

Mimi’s determination and talent helped her to receive a full scholarship to the Manhattan School of Music Conservatory where she completed her Bachelor’s Degree in Music. While at the Manhattan School she continued off campus to study, attend workshops or mentor with saxophonist Charles Davis, Barry Harris, Ron Carter, Milt Hinton, Dr. Billy Taylor, Yusef Latif, Max Roach, and Latin bass techniques with Guillermo Edgehill. “I even missed my own graduation at the Manhattan School because I got my first music tour days before the graduation and had to fly to Japan, and you know, I’ve been doing music ever since.”

She has performed in bands led by Tia Fuller, Mala Waldron, Luis Perdomo, Pauline Jean, Lynette Washington, Tamar-Kali, Ravi Coltrane to mention, and even made a special appearance at Beyonce's private birthday party for Jay-Z's 40th.

She has toured extensively throughout Europe and the United States. In 2003, Miriam Sullivan (aka Mimi Jones) co founded the group ”Jazz Sabroson” with drummer Antonio De Vivo and was commissioned by the Kennedy Center and Department of State to participate in the international program of cultural exchange performing in Brazil, Uruguay, Ecuador, Barbados, Jamaica, Nevis and the Dominican Republic. These Jazz Ambassadors were elected in 2006 by the Department of State and Jazz at Lincoln Center to participate in the Rhythm Abroad Program, this time traveling to the Democratic Republic of Congo, Mali, Mauritania, Morocco and Algeria. Later on Mimi returned to Mali with guitarist Steve Bloom, where the two diligently worked with Malian students of all ages, exploring the possibilities of musical expansion, and gladly partaking in the cultural exchange. Mimi and Steve were able to take 100 new guitars to the Malian students that year from money raised to enhance the music program in Bamako. Miriam explains that going into the motherland of Africa is always a heart-felt experience and continues to change her outlook on life. She constantly looks for new opportunities in which to aid her brothers and sisters abroad as well as at home with her own organization “The Girls Group” located in the South Bronx.

Mimi Jones has been a reoccurring face at the Kennedy Center since 2000, as part as annual the Mary Lou Williams Women in Jazz Festival playing bass for the annual piano and saxophone competition. She has also performed in groups led by pianist Rachel Z, piano legend Joanne Brackeen, saxophonist Tia Fuller, and her own project the Mimi Jones Band which was featured premièring her debut release, “A New Day.” The Mimi Jones Band has also appeared at the The Blue Note, The Jazz Standard, Dizzy’s Club Coca Cola, Small's Jazz Club, Symphony Space, and the Zinc Bar. In the future Mimi Jones plans to incorporate multimedia in her performance and collaborations with other artists. She wants to find more diverse ways to reach out to the public by making her music accessible while maintaining the integrity of the music that has propelled her on her journey.

Recently Mimi Jones can be found playing on Terri Lyne Carrington's new release "The Mosaic Project", Tia Fuller's 2011 release "Decisive Steps", and Poet extraordinaire Samantha Thornhill's "Odelicious Poems". Earlier this year Mimi made a second trip to the magical isle of Haiti for the annual Haitian Jazz Festival. She was excited to perform with vocalist Pauline Jean and participate in the workshop series with Haitian students.

Although Mimi plays acoustic bass, baby bass, electric bass, and numerous styles of music including jazz, funk, hip hop, Cuban, free, folk, and pop. She remains open to learning new sounds. "I hope that this music sends a message of unconditional love and encouragement to let people know that we all experience the same things but in different ways. If we find the joy within eventually it will be all around us." Show less

In a World of Female Bassists Mimi Jones Sets the Bar with Her Debut CD...

“She has developed a style that is smooth, sure, uncomplicated but with a sensuous touch.” —Norman Munroe, Jamaica Observer 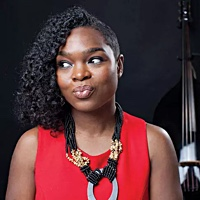 All About Jazz musician pages are maintained by musicians, publicists and trusted members like you. Interested? Tell us why you would like to improve the Mimi Jones musician page.