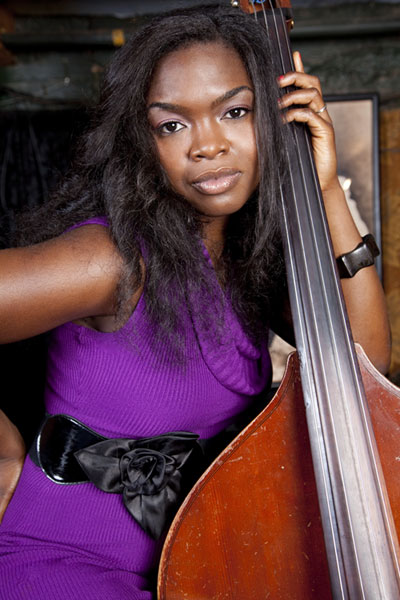 slideshow
Mimi Jones is the label founder and a N.Y.C. native, bassist, vocalist, composer and producer! Her new Balance CD release is a blend of genre's of classic and contemporary jazz, edgy soul and even a rock element. Balance stands firmly in its leaders dedication of “creating great music of today"!

With Balance, Mimi's universal music heritage is well founded as she says of her early family life “on any given day I could hear John Coltrane's “Syeeda's Song Flute," followed by Al Green's “Let's Stay Together" and “You Were Always On My Mind" by Willie Nelson".

Whether its “Nothing Like You" with young super talent Justin Faulkner on drums, or Speedbump featuring Ingrid Jensen's warm and colorful trumpeting they both swing madly. And with The Edge Of A Circle dedicated to a Mimi Jones inspiration Miles Davis, they all typify the love Mimi has for her jazz heritage and foundation.

As Traveler and Incy Wincy Spider may bring to mind Mimi's major vocal influence, Nina Simone and yet Patriot while it has a social genesis, Mimi continues “I wrote that for the soldiers who must kill to protect their country's interest, but spiritually feel horrible after taking another human life. The screeching guitar is definitely a representation of the pains of war". One might find that “screeching guitar" and fender rhodes is reminiscent of the best of the late 70's and early 80's jazz fusion period!One will find a new definition of Balance with Mimi Jones!

Camille Thurman also a NYC native is a tenor and soprano saxophonist, flutist, vocalist, composer and educator, Origins is her debut CD for the Hot Tone Music label. If I were to define her new CD in two words I'd use, fresh and invigorating!

Of course there is much more to say about Camille who's sound in instrument and voice is seasoned beyond her years. Accolades and educational accomplishments are many and wide ranged with reference's to jazz masters Gene Ammons and Stanley Turrentine to name a few. With a vocal style that incorporates the range from Minnie Ripperton, Ella Fitzgerald to Sarah Vaughan!

One listen to A Change Of Mind and you'll immediately here the best of Camille's music world with the warm and tender flow of the tenor and her rich and soulful voice. The title track Origins is played at such an in-creditable tempo and her vigorous tenor playing is only matched by the dazzling piano solo of Luis Perdomo! While the 13 tune set is loaded with magical musical moments Pursuit With Purpose and an amazing arrangement of Jitter Bug Waltz have to be highlighted! As Grammy winner Russell Malone once said “Camille has a warm and beautiful sound...a creative improviser. She swings, has good time and plays with taste. Keep your ears on this young lady!" With Origins Camille Thurman has arrived!

Shirazette Tinnin is a native of North Carolina who's debut CD is Humility: Purity of My Soul which Shirazette describes as “fusion jazz with straight ahead elements"! Perhaps it's the way she's “fused" the “elements" together that makes this recording so successful!

As with her label mates Shirazette demonstrates her compositional skills through out and doesn't over power the ensemble playing, or soloing, until its her time and then you can hear and feel all her sensibilities and idea's!

On Passion Dance where label mate Camille Thurman burns through an exceptional solo followed by an amazing thunderous solo by Shirazette!!

Eddie Harris' Freedom Jazz Dance takes on a new life with Ms. Tinnin laying back so rhythmically subtle, she's joined here by label mate number two with Mimi Jones locking it in so effortlessly, and with Willem Delisfort on piano this rendition of the jazz classic becomes her own!

Perhaps the best example of “fused and elements" coming together for the perfect blend is with The Warmest Season where the Brazilian influence becomes present, possibly from her study of world music and rhythms and as Shirazette say's of that experience “it opened my playing" and I can feel the down beat in the front, back, or middle"!

There are so many musical highlights in this CD as with Aunt Sissy and My Human Condition that features Tia Fuller at her groovinist best!

To say that Shirazette Tinnin is an amazing drummer is and understatement, but to say she is that and a leader, arranger, and pursuer of rhythmic excellence should give you a clear idea of the musician you're experiencing now, and this is her first CD!!!

All three of these release's are a sample of the tapestry of sound from Hot Tone Music!