By Jeff Dayton-Johnson
January 13, 2011
Sign in to view read count 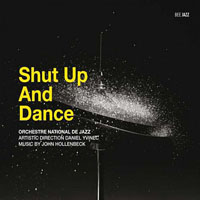 Shut Up And Dance

Daniel Yvinec's first foray as artistic director of France's National Jazz Orchestra, a tribute to English rock oddball Robert Wyatt (Around Robert Wyatt, Bee Jazz, 2009) drew well-deserved critical praise. To some, however, it sounded more like a pop masterpiece than appropriate fare for state-sponsored guardians of the jazz repertoire. "Is this an ONJ?" sniffed pianist and former ONJ director Antoine Herve (class of 1987-1989) in a magazine interview. "You could start by removing the 'J...'" The stakes were thus high for Yvinec to turn in a more reverential set the second time round.

Percussionist and composer Hollenbeck, who composed all the pieces herein, meanwhile, could stand, if anything, to let his hair down. His records have been praised to the skies but skirt ever closer to the seriousness of contemporary classical composition.

The Yvinec-Hollenbeck collaboration on Shut Up And Dance is a formidable achievement for many reasons, but not least among them is that it manages to restore a luster of seriousness to Yvinec even as it lends a tinge of whimsy to Hollenbeck.

The two-disc set is not the backbeat-driven funkfest that the title might imply. Dance is an overriding concern of the material, and you may well be motivated to motor-vate as you listen to the majority of the pieces on Shut Up And Dance. But Hollenbeck takes a much broader view of dance: without being ethnically or historically specific, the compositions evoke dance in its ceremonial or religious aspects more than as a courtly prelude to getting down.

And the principal building block of the performances is percussion: long complex rhythmic lines, overlapping and interlocking. In this way, Hollenbeck's compositions resemble the work of Steve Reich and Philip Glass, or the synthesis of Reich's and Glass's classical compositions and the good-foot virtuosity of James Brown effected by Nik Bärtsch. As with those musicians, the repetitive rhythmic patterns establish an almost pictorial stillness.

But unlike Reich, Glass and Bartsch, Yvinec and Hollenbeck come off as less mechanistic and more living and breathing: there are solos and improvisation and signs of life amidst the ritual . In this respect, this record is a distant relative of Duke Ellington's "Afrique," from his masterpiece The Afro-Eurasian Eclipse (Original Jazz Classics, 1971): a fundamentally drum-led composition with the full resources of the big band deployed to drive the point home. (Take that, doubting Thomases who worry that Yvinec's young charges are not getting a grounding in the classics of the genre.)

Nowhere is this mixed musical heritage more clear on the ONJ record than "Praya Dance," a ferociously multilayered percussion piece that has the immediacy of an ethnomusical field recording, accented by flautist Joce Mienniel's aggressive and ingenious solos. "Flying Dream," meanwhile, is built around a honking saxophone pulse that could stand in for a ceremonial instrument leading celebrants around a fire. Other pieces are less bluntly beat-driven: the wistful "Melanie Dance," for example, or the electric bass-led "Life Still."

The record's highlight is "Shaking Peace," which reminds us that, in jazz at least, the piano is a percussion instrument, too. As dance, "Shaking Peace" is the dance of a spirit possessed; as music, it's the aural equivalent of a pointillist painting, thousands of precisely delineated constituent points coalescing to form a soft and impressionistic visual field. Here, a never-ending flurry of rapidly-struck piano notes, seconded by hard- to-identify staccato and glissando effects by a host of other instruments, describes an elegiac melody. The paradoxes are many here: the band is playing very fast, yet the impression is one of glacial deliberation. As if to remind us what "Shaking Peace" is made of, Risser takes a solo midway through the piece, constituted likewise by rapid- fire piano notes, but during the solo they sound like rapid-fire piano notes, and not like the threads of a rich tapestry. Toward the piece's climax, the ONJ throws in what sound like alarm clocks and a jackhammer, underscoring the paradoxical relationship between the performance's materials— hammered, metallic, percussive—and the oceanic lushness of the ensemble sound.

So it doesn't sound like Ellington or Basie, not entirely, but "Shaking Peace" and the rest of this album recall to mind just why the big band remains a vital medium for jazz expression.