Band Of Gypsys Reincarnation: 40 Years After 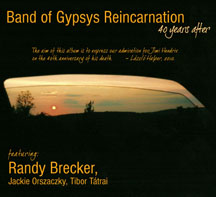 The influence of Jimi Hendrix reaches far and wide even after his untimely death at 27 years of age on September 18, 1970. Over the years, there have been countless dedications to the iconic guitarist including a few notable jazz-oriented releases like Purple: Celebrating Jimi Hendrix(ACT, 2007), from the intrepid French Vietnamese guitarist Nguyen Le.

The heralded coverage of Hendrix's 40th anniversary in 2010 unveiled Sony's West Coast Seattle Boy anthology and released material in Valleys of Neptune (Legacy Recordings). Yet another gem was quietly released by a peculiar but talented Hungarian ensemble—Band Of Gypsys Reincarnation, featuring trumpeter Randy Brecker, with the heartfelt 40 Years After.

Led by guitarist László Halper, the group successfully reinterprets a few of Hendrix's classics while capturing his mystic and offering something fresh. Halper's playing is first and foremost the key—unlocking psychedelic riffs and amber toned runs with a perfect blend of abandon and control. But it's also the band's anchoring—tight musicianship, touches of electronic effects, and the boldness to reinvent these beloved tunes, that sets the release apart from other dedications.

The set burns but embodies a cool melodism; by the time "If Six Was Nine"s classic riff digs in, Brecker's veteran trumpet rides over a tripled swing time, with added magic from Miklós Lukács' cimbalom (a hammered dulcimer) and Halper's inventive tweaking. The unparalleled "Purple Haze" has never sounded as mellow, as the band slows the tempo but keeps the essence intact; Halper transitioning from clean to warm distortion, sprinkling varied effects with aplomb. Hendrix's unforgettable "Hey Joe" takes a unique stance, with a mellifluous introduction, before turning up the amps. "Who Knows" is still a stone cold groove, and here it dons more of an old school R&B vibe, even quoting some lines from Miles Davis.

Chopin's "Prelude In E Minor" seems out of place until the same chords are shared in the opening of "Medley: Little Wing / 3rd Stone From The Sun (Pt 1)." It is this thoughtfulness and empathy that makes 40 Years After a fitting and outstanding tribute to one of music's all time greats.