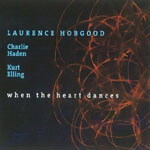 Man, this is a beautiful album. How could it be otherwise? An intimate, unhurried conversation between Laurence Hobgood, since 1994 vocalist Kurt Elling's musical director, and one of the finest jazz pianists out there, and the magisterial Charlie Haden, featured bassist in bands led by saxophonist Ornette Coleman, pianist Keith Jarrett and guitarist Pat Metheny, among a truck load of other distinctions. The inimitable Elling guests on three tracks.

In his liner notes, describing the genesis of When The Heart Dances, Hobgood relates how, at a convention of the IAJE (International Association of Jazz Educators), he was chatting with Haden. Commenting on the mayhem and confusion that is the recording industry in the 2000s, Haden said something like, "I don't know about you, but the crazier things get, the more I think how nice it is to make records where we can just play music."

And just play music is what they do—gorgeous, transporting music unalloyed by artifice, gimmickry or any notion to be style jockeys. Within 30 seconds or so of the start of the opening track, Jay Livingston and Ray Evans' lovely "Que Sera Sera," Hobgood and Haden have woven a spell which doesn't let up until the final whispers of Don Grolnick's "The Cost Of Living," and lingers in the memory long after. If music can soothe the savage beast, the medicine doesn't get any more efficacious than that on When The Heart Dances.

The pace is measured and moderate—even Hoagy Carmichael's "New Orleans" is here more hymn-like than a dancehall romp—the interaction deep and easy. Hobgood and Haden get straight to the heart of their source material, five originals and six standards, with a gentle intensity that is utterly beguiling. It's hard to think of many parallels, but the imagination with which the duo explore the hidden corners of the standards is on par with that of pianist Al Haig's The Al Haig Trio (Esoteric, 1954) or 55 years later, pianist Liam Noble and drummer Paul Clarvis's Starry Starry Night (Village Life, 2009). Exquisitely poised, it's music of shimmering beauty. Elling's three tracks slot right into the ambiance, his performance of Haden's rhapsodic "First Song" a masterpiece among masterpieces.

A mention has to made of sound engineer Ken Christianson, who has turned in what is in effect an audiophile recording, perfectly capturing the spectrum of resonances of both Hobgood's Steinway D and Haden's bass, made some 250 years ago by the French luthier Jean-Baptiste Vuillaume, and sounding never more like an instrument of the gods than it does here. Elling's warm caress is similarly ennobled. Were it recorded on a mobile phone, When The Heart Dances would be magical enough. By way of Christianson, it's simply irresistible.

Que Sera Sera; When The Heart Dances; First Song; Sanctuary; Chickoree; Stairway To The Stars; New Orleans; When Did I Choose You?; Leatherwood; Daydream; The Cost Of Living.