The heavy-hitting Westchester Jazz Orchestra, one of whose ambitions under artistic director Mike Holober is to broaden its musical horizons, devotes its second album to renovating for a sixteen-member ensemble the music of pianist Herbie Hancock's classic recording Maiden Voyage (Blue Note, 1964). The resulting nine-part suite, with arrangements by Holober, Pete McGuinness and WJO stalwarts Jay Brandford and Tony Kadleck, gives Hancock's themes their due as it adds the color and excitement that only a big band can provide.

The orchestra's strength lies in its collective experience and individual brilliance, which together leave no doubt that Hancock's masterwork is in the best of hands. The ensemble is sharp and resourceful, the soloists no less so on a series of engaging tone poems that are preceded, intersected and followed, respectively, by a Prologue, Interlude and Epilogue, all tastefully arranged by Holober. The tranquil "Prologue" leads to McGuinness' attentive treatment of "Maiden Voyage," whose well-known melody paves the way for crisp solos courtesy of David Brandom's nimble soprano saxophone and Marvin Stamm's seductive flugelhorn. Stamm returns, this time on trumpet, with tenor Jason Rigby to brave the turbulent "Eye of the Hurricane." Brandford arranged the decorous "Little One," on which he shares blowing space with trombonist Larry Farrell and bassist Harvie S.

The ensemble shifts into high gear for "Survival of the Fittest," Parts 1 and 2, the first of which showcases trumpeter Jim Rotondi and pianist Ted Rosenthal, the second Rotondi and Rigby in a series of heated duels that may produce no winner but enkindle plenty of fireworks. "Dolphin Dance," one of Hancock's most captivating melodies, presages the evocative Epilogue, with perceptive statements on the former by Rotondi, Rosenthal and tenor Ralph Lalama, on the latter by Rigby and Rotondi. The WJO's enterprising rhythm section is securely anchored by drummer Andy Watson.

Those who are familiar with Maiden Voyage should be delighted to envision Hancock's magnum opus in a splendid new wardrobe, while for those who aren't, the Maiden Voyage Suite provides a splendid introduction to a jazz touchstone that has stood the test of time. 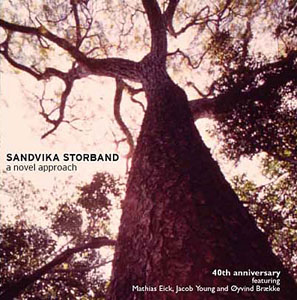 A Novel Approach, the latest enterprise by Sweden's admirable Sandvika Storband, marks the ensemble's fortieth anniversary by showcasing the music of trumpeter Mathias Eick and guitarist Jacob Young and, to a lesser extent, the arranging talents of Oyvind Braekke who served as Sandvika's second trombone from 1988-91. Eick wrote four of the album's nine selections and solos on half a dozen, while Young composed the others and solos on as many. As for Braekke, he arranged Eick's compositions and co-arranged the others with Young.

The music itself is by and large cerebral and even-tempered, as befits its Nordic provenance. In other words, if you are looking for intensity or turbulence, look elsewhere. If, on the other hand, it is depth and beauty you are seeking, there's an abundance of those ingredients on every number. Tempos, with one exception (Eick's "October") are leisurely to moderate, colors warm and seductive. Eicke and Young are accomplished soloists whose perceptive comments are well-suited to the music's mellow temperament, as are Braekke's on "St. Ella" and "October." Elsewhere, there are concise yet effective statements by trombonist Auden Breen ("The Promise"), bassist Jan Olav Renvag ("St. Ella"), pianist Havard Graff ("Mr. Cosmopolitan," "Williamsburg," "Endings"), Renvag, tenor Biorn Barlo and guitarist Sverre Hanstad ("Endings").

Brass and reeds are burnished and orderly, the rhythm section sharp and attentive, thanks to the earnest supervision of conductor / music director Frank Brodahl. Unlike Sandvika's previous albums, which for the most part have been straight-ahead and swinging, A Novel Approach is geared toward those who appreciate big-band music with ample meat on its bones. Not always easy to chew but once digested it should assuage even the most fastidious appetites. 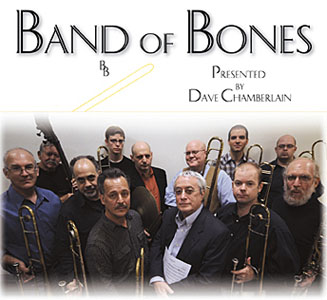 No, Band of Bones is not the skeletal remains of an ill-fated jazz ensemble that has enlisted in that euphonious concourse in the sky; it is in fact a viable turbo-charged group comprised of nine trombones and rhythm. If that seems like overkill (pun intended), the notion is immediately laid to rest as the BoB scampers eagerly into its debut album's animated opening number, Cole Porter's "It's All Right with Me." Clearly, these are no dry bones (if you'll pardon the indulgence) but an alliance of accomplished musicians (ably led by Dave Chamberlain) most of whom happen to play the trombone (and play it remarkably well).

True, there are no trumpets or saxophones on the premises, but these 'bones are so solid, and the charts so engaging, that their absence quickly becomes a non-issue. In other words, these are (wait for it . . . !) undeniably hip 'bones, and are a pleasure to hear and groove on. Three of the charts, it should be noted, are by J.J. Johnson, two others by Wayne Andre. Pianist Kenny Ascher wrote and arranged the buoyant "Love Again" (for the rhythm section only) to complement originals by Frank Wess (the Count Basie-inspired "Segue in C"), Bill Whited ("Bonin'") and Moises Simon ("El Manisero"—in English, "The Peanut Vendor") arranged by Chamberlain. Johnson scored Dizzy Gillespie's oft-scanned "Night in Tunisia," the standard "No Moon at All" and his own "Four Plus Four," Andre "I'm Getting Sentimental Over You" and David Raksin's "Laura." The other charts are by Kai Winding ("It's All Right with Me"), James Zeller (Cedar Walton's "Bolivia"), Nate Mayland ("Dear Old Stockholm"), Bob Suttmann ("The Girl from Ipanema") and Dick Lieb ("Stardust"). Needless to say, the band presses home the best in each of them.

While tenor trombones are the rule, Chamberlain adds color with an agile flute solo (shadowing Bruce Eidem's throaty plunger) on "Segue in C," and Eidem takes a muted solo on "Bolivia" (following zesty statements by Chamberlain, Suttmann, Mayland and Charley Gordon). If "Love Again" is the rhythm section's reward for its steadfastness, it is well-earned, as Ascher and his colleagues (bassist Dick Sarpola, drummer Mike Campenni and percussionist Chembo Corniel) provide unflagging support on every number—and Ascher tosses a number of charming solos into the mix.

How many trombones are too many? That's hard to say, but these nine are precisely enough to manage the task at hand, which was conceived as a tribute to Kai and J.J. The Band of Bones is most assuredly not "too much of a good thing," an appraisal endorsed in the liner notes by another pretty fair trombonist, John Fedchock. Even though the band itself is decidedly down-to-earth, trombone enthusiasts may find themselves elevated to higher realms while listening to this empyrean album. 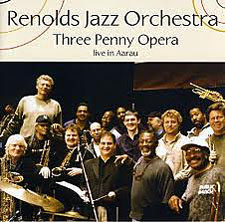 Renolds Jazz Orchestra's Three Penny Opera was recorded in Aarau, Switzerland, in 2000 to mark the centennial of the composer Kurt Weill's birth. The mystery is why it took eleven years for this lustrous and engaging two-disc concert set to be released. This new look at Weill is a pleasure to hear from start to finish, and is immeasurably enhanced by the presence of a number of American visitors including trumpeters Randy Brecker, Wayne Bergeron and the late Barrie Lee Hall Jr.; saxophonists Bobby Watson, Walt Weiskopf and Shelley Carrol; trombonists Vincent Gardner, Tom Garling and Buster Cooper; pianist Christian Jacob and drummer Victor Lewis. When considering the idea of recording Weill and librettist Berthold Brecht's masterwork, leader / saxophonist Fritz Renold decided to place the task of rearranging the sweeping score in the capable hands of his long-time friend and musical partner, Jacob, which proved to be a wise decision. The Three Penny Opera always had a heart; it now has a soul to underline its redemptive message.

Jacob's charts are perceptive and entertaining, and the orchestra gives them their due with a performance that breathes fresh life into every number. While soloists aren't named, that is surely Watson delivering a breathtaking alto solo on the opera's signature theme, "Mack the Knife" (after which bassist Miroslav Vitous' closing remarks, even though admirable in their own right, are rendered anti-climactic). Brecker and Weiskopf are prominently featured, and there is suitable blowing space along the way for Lewis ("The Riding Messenger"), Hall ("What Keeps a Man Alive"), Garling, Carrol, Jacob, baritone saxophonist Bernd Konrad, and, presumably, Renold himself on alto and / or soprano. Onstage, the musicians were dressed as beggars in mismatched outfits that must have helped make the presentation even more pleasing and persuasive for the audience.

Once the Three Penny Opera score has been thoroughly canvassed and renovated and the "Final Verses of the Ballad" have been played, the orchestra appends a twelve-minute encore, "Warehouse Blues," written by Renold and arranged by Adi Yeshaya. While not from the opera, it maintains the Weill / Brecht spirit, skimming merrily along behind iridescent solos by Jacob, Watson, Weiskopf, Carrol and others along with superior lead trumpet work by Bergeron (who is awesome throughout). Even though more people have perchance heard about the Three Penny Opera (thanks to "Mack the Knife") than have actually