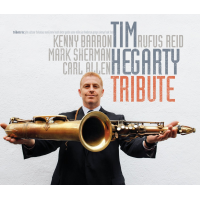 Tim Hegarty's Tribute is an audible panegyric on the great saxophonist-composers. It's a well-crafted, straightforward date that highlights Hegarty's love for those who've come before and the work that they've done on paper and on record.

The list of saxophonists that Hegarty has studied includes George Coleman, Jimmy Heath, Frank Foster, Joe Henderson, John Coltrane, Sonny Rollins, Charlie Parker, and Michael Brecker; the first four on that list are represented on the composition side during this program and the rest come out in various ways as Hegarty winds his way through the music.

Sonically speaking, Hegarty's tenor comes off like a more lustrous Joe Henderson with a dash of Dexter Gordon thrown into the mix. His soprano is broader sounding and less shrill than most. He sounds phenomenal on both horns, riding atop the to-die-for rhythm section of pianist Kenny Barron, bassist Rufus Reid, and drummer Carl Allen.

This quartet, augmented by vibraphonist Mark Sherman on five tracks, doesn't try to reinvent the wheel by deconstructing or wildly reconstructing anything. This is more of an old school outfit, content to simply take a song and run with it. They play out-and-out classics (Henderson's "Inner Urge" and Foster's "Simone") deliver a few lesser known Heath tunes along with his most famous composition ("Gingerbread Boy"), and tackle a pair of Hegarty originals with class and assuredness. Thought was clearly put into the way the songs would be arranged or structured, but nothing was thought-to-death. Many outings of a similar nature tend to be underwhelming or overcooked, but this one came out just right.