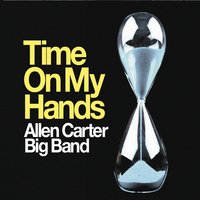 In 2010, composer / arranger / drummer Allen Carter seemingly appeared from out of nowhere (North Dakota, actually) to record Gifts, his first album as a big-band leader and one of the more impressive anthologies in that or any other year. As 2016 passed its midpoint and moved inexorably toward a final bow, Carter decided the time had come to record again, and in so doing held fast to the maxim "if it ain't broke, don't fix it." In other words, Carter's second album, Time on My Hands, is every inch as resourceful and engaging as its predecessor and a worthy aspirant in any sweepstakes to choose the year's most exceptional big-band album.

As before, Carter enlisted the help of trumpeter Wayne Bergeron to assemble eighteen of the finest musicians Southern California has to offer (a dozen of whom—including Carter—appeared on the earlier album). And as before, Carter wrote most of the music and arranged all of it, his drum tracks were recorded (by Ryan Jackson) in Minnesota, and the ensemble component was superimposed (by Rich Breen) in Burbank, CA. To say the result is seamless would be to understate the case. Simply put, it can't be done any better; there are no missteps, and Carter and the band are perfectly in sync.

That would be irrelevant, of course, if the music itself were less than admirable. And it is here that Carter reaches his artistic summit, designing melodies and charts that call to mind such master craftsmen as Bill Holman, Sammy Nestico, Neal Hefti, Gerry Mulligan, Thad Jones, Frank Foster, Ernie Wilkins, Bob Florence, Tom Kubis and their brethren. Hyperbole? Listen and decide for yourself. Carter's original compositions are superb, while the songs he didn't write or paraphrase (Vincent Youmans / Harold Adamson's "Time on My Hands," Miles Davis' "All Blues") are given a fresh coat of paint that makes them sparkle in a brand new light. "Time" benefits from harmonic brilliance and freely shifting time signatures, while "Blues" generates far more heat and intensity than its cool-headed prototype. Tenor Rusty Higgins and trombonist Alex Iles solo on "Time," baritone Tom Peterson and guitarist Tom Hynes on "Blues."

Carter's "Table for One," a sumptuous vehicle for Ron Stout's eloquent flugelhorn, is sandwiched between the opener, "Time on My Hands," and "All Blues." After that it's all Carter, starting with the genial samba (or bossa) "Unbridled Joy," a showcase for Andy Martin's agile trombone. "Joy" is superb, but no more so than what is to follow. Martin returns with pianist Christian Jacob to brighten the frisky "Evan Steps Differently," while tenor Bob Sheppard and guitarist Hynes take charge on "Yellow Sunshine 16," whose shuffling beat gives way midstream to a more straight-ahead pattern, better suited, as it turns out, to the muscular tenor than the squealing guitar.

As is true of many jazz composers / arrangers, Carter bases many if not most of his themes on standards from the Great American Songbook, a clear example of which is the happy-go-lucky "In from Out There," also known as "Out of Nowhere," on which Stout (trumpet) and alto Dan Higgins are the soloists. The buoyant "Bossa No Mas" bears a strong resemblance to "Indiana," while the fiery, fast-paced "Bad Bama Betty" (on which tenors Sheppard and Rusty Higgins engage in spirited horn-to-horn combat) is even more markedly a close kin of "Sweet Georgia Brown." Elsewhere, Carter's disguises are more cleverly applied, although "Unbridled Joy" does call to mind Billy Strayhorn's classic, "Take the 'A' Train." Stout (flugel) and Sheppard offer persuasive solos on Carter's lustrous "Prayer," a decorous preamble to "Bad Bama Betty," which closes the album on an upbeat note.

That is as it should be, as "upbeat" is the frame of mind that underscores each of Carter's superlative compositions and arrangements. Add eighteen world-class musicians, exemplary recorded sound and "Time on My Hands" is the complete package, a big-band album to serve as an agreeable listening companion for years to come.

Time on My Hands: Table for One; All Blues; Unbridled Joy; Evan Steps Differently; Yellow Sunshine 16; In from Out There; Bossa No Mas; Prayer; Bad Bama Betty.