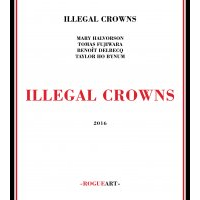 Three quarters of the cast on Illegal Crowns comprises familiar faces and frequent collaborators. Cornetist Taylor Ho Bynum and guitarist Mary Halvorson have enjoyed long associations with iconoclastic composer and reedman Anthony Braxton. With the addition of drummer Tomas Fujiwara, they constitute Bynum's Trio and the larger part of The Thirteenth Assembly, whose Station Direct (Important, 2011) was one of the unsung classics of that year. The ringer here is French pianist Benoit Delbecq who, as well as leading his own outfits, presented an acclaimed double trio with Fred Hersch on Fun House (Songlines, 2013).

Together they form a collective of supreme talent, united by a lyrical streak which surfaces even amid invigorating improv rigor. Bynum's astonishing technique is by now a given, deployed with an insouciant aplomb in often understated solos which balance an attractive melancholy tinge with sudden tangential excursions.

Similarly Halvorson possesses a unique voice, creating a spidery web of detuned strums, hokey lines and pitch bending FX. Delbecq, in spite of his renown for piano preparations, sticks largely to the conventional keyboard, combining harmonic acumen with darting clusters and reiterated motifs. Fujiwara proves the unifying force, moving effortlessly in and out of time with a supple yet precise touch, which keeps everything on point.

All four bring songs to the date and composerly insights to their interpretation. The ensembles are often densely layered, as in the Delbecq's opening "Colle & Acrylique," where the pianist's modifications emulate a thumb piano alongside Fujiwara in unusual African-derived sonorities, while Bynum essays a plaintive air and Halvorson provides loose counterpoint.

The mixture of jazzy outbursts, snatches of melody and involved extemporization showcased on the pianist's "Holograms" holds to varying degrees for all tracks no matter who the author. Cuts such as Bynum's "Thoby's Sister" and Halvorson's near title number reinforce the overall impression of an oblique but engaging music in which tunes are glancingly referenced, but nonetheless serve as the ballast anchoring elaborate group interaction and formidable individual improvisation. Such intricacy results in plentiful reward for time invested.