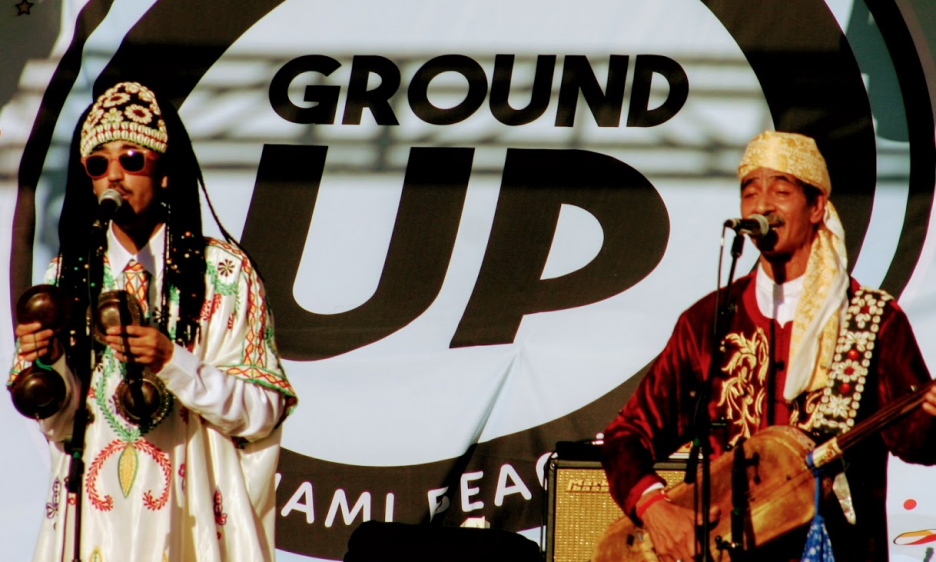 My vision for the festival is for people to come to it and maybe not recognize anyone who's on the bill, but end up with a list of new artists they've discovered. That's the dream for me—and maybe eventually not even announce the artists, period. Just to have people come and experience everything blind—in a very pure and open-minded way. —Michael League

An internet acquaintance has a running post gag that she labels with #BecauseFlorida. In it she basically puts forth all of the unattractive, wacky and head-scratching reports that come out of the Sunshine State. It IS funny (and seemingly never at a loss for material) but I suspect you could easily paint many a state as a bastion of insanity if you used the right brush.

But let's face it, all jokes aside, Florida IS different. A wildly unique mix of ethnicities, cultures and attitudes herded into an enviable climate. Within THAT lies Miami Beach, where it seems the multipliers-that-be have elevated that Florida model to a whole other level.

It's a totally appropriate place then for the GroundUp Music Festival—a musical smorgasboard offering a wonderfully improbable mix of styles and sounds that does its setting proud.

With the familiar laid out next to the exotic, it was easy for attendees to indulge in a variety of musics that they might never have thought to try on their own. From the Moroccan sounds of Innov Gnawa and percussion powerhouse PRD Mais from Brazil, to Canadian singer-songwriters The O'Pears and the iconic David Crosby's Lighthouse Band, to jazz/R&B goddess Lalah Hathaway and, Multi-instrumentalist, singer (and whistler) Andrew Bird, to the dulcimer fusion trio House of Waters and the funky fun of Tank and the Bangas, 2019 festival-goers were given a wide variety to sample.

The connecting thread through it all seems to be a precious, if not elusive niche that host band Snarky Puppy has always endeavored to tap into—one of uncommon musicianship coupled with populist accessibility—or as SP likes to put it: "Music for brain and booty."

This proved to be a solid recipe for crossover appeal for the festival's three days. Looking at all manner of people—(some sporting wildly disparate T shirts from Toto and Weather Report to Dream Theater and gulp, Marilyn Manson)—grooving hard to the powerhouse funk of Ghost-Note one minute, and then spotting them swaying to the breezy sounds of Afro-Peruvian grande dame Susana Baca the next was an extraordinary thing to witness. Maybe this willing eclecticism is indicative of their fan base in general but as with many things SP, it really does seem to fly square in the face of conventional wisdom.

So too does their leader, bassist and festival artistic director, Michael League:

"My vision for the festival is for people to come to it and maybe not recognize anyone who's on the bill, but end up with a list of new artists they've discovered. That's the dream for me—and maybe eventually not even announce the artists, period. Just to have people come and experience everything blind—in a very pure and open-minded way. "

This suggests another measure of the festival's success could be how many times one might have said, "Wow, I think I've found my new favorite band..." Admittedly, this was experienced at GUM Fest more than once but It's hard to say how many times because, truth be told, it gradually became an expectation. High marks there...

In addition to an extremely talented musical roster of knowns and unknowns (a complete list is below), there were a host of other things that also set GUM Fest experience apart:

Unlike many festivals, the main performances at GroundUp were scheduled with no overlap on two different stages in close proximity so attendees never had to miss a show. A big plus to be sure, in light of so many worthy acts performing. Add to this a very egalitarian schedule with all artists doing one set only (with no encores), tightly timed to maximize the number and variety of artists presented—(rather than a handful of openers with a few big names hogging inordinate amounts of time). If there is one small caveat here, it would be that the scheduling might have been timed just a bit too tight. At a few points, it felt that the addition of couple of minutes between acts might have been nice to make the move from stage to stage a bit less urgent—(an urgency magnified by all else regarding the festival being so chill). All in all though, it was a very minor thing in light of the amount of music this afforded per day.

There were about 10 of these over the three days held outdoors in front of the main building on the bandshell grounds or on the beach. Their various topics were weighted towards the instructional—(Groove Construction and Songwriting Workshop)—and the quasi historical—(The Story of Sacred Steel and The African in Peru)—to the mostly participational—(Acapella By the Sea). They featured a broad mix of the performing artists present and were as entertaining as they were informative. Unlike the stage shows, some of these were scheduled at times that overlapped with the main performances. As a result, these (and the late night shows) were some of the few times one had to pick and choose what they wanted to see—and what they had to to skip.

It was quite fortunate then that the Improvisors Workshop—the first event of the first day of the festival—didn't overlap with anything, for it proved to be a session not to be missed. Featuring vocalist Lalah Hathaway, saxophonist Chris Potter, drummer Nate Smith, bassist (and Artist-at-Large) Richard Bona and moderated by Michael League, it was a rare thing indeed to see artists of this caliber playing—and more importantly, playing around—with each other to explore and share what they do with an intimate group of fascinated onlookers. And those onlookers included other festival performers like David Crosby (marveling at Lalah Hathaway's scatting abilities) and SP saxman Bob Reynolds (being a bit rapt while capturing Chris Potter's explosions of off-the-cuff magic on his video recorder). It was extraordinary in that is was equal parts informality, virtuosity and inclusiveness—something that was to be very emblematic for the three days to come.

A number of the other workshops caught were standouts. Among these were Groove Construction—with SP drummers Larnell Lewis, Jamison Ross and Jason JT Thomas (and one unscheduled Robert "Sput" Searight—and another entitled A Bass Conversation that featured bassists Michael League, Richard Bona, Wes Stephenson (The Funky Knuckles), MonoNeon (Ghost Note, Prince) and Panagiotis Andreou (The NY Gypsy All-Stars, Now vs Now)—where the "conversation" was happily both verbal and musical.

The Artist-at Large at GUM Fest has no slated performances per se, but makes appearances in many a set over the course of the festival. This year's 2019 artist-at-large was bassist extraordinaire Richard Bona (solo artist, Pat Metheny, Zawinul Syndicate, Mike Stern). Bona's participation in sets with Andrew Bird, David Crosby, and Bokanté as well as joining in workshops were always among the brightest spots of the festival.

Other unannounced walk on guests were common as well and included trumpeter Nicholas Payton (who guested in sets with The Smoogies, Ghost-Note and Snarky Puppy), saxophonist / flautist Carlos Malta ( who sat in with PRD Mais along with SP saxman Chris Bullock) and David Crosby (who jumped onstage to join singer / keyboardist Michelle Willis' band ).

It was also common for musicians to commingle and form line ups for each other's performances The O'Pears sang back-up for Maz and Michelle Willis' bands for the entirety of their sets and different members of Snarky Puppy joined in to form the backing bands of many acts—especially those SP members who presented sets of their solo material. Michael League himself played in at least five different line ups.

The stage wasn't the only place the saw musicians freely mingling. There were very few segregations between artists and audience at GUM Fest. In fact it seemed the performers came to hang and watch as much as perform and many were there for the duration. There were always members of a band from earlier in the day watching who ever was on at the moment. Look over there and see David Crosby sitting at a table watching Snarky Puppy's set. Look over there and see Richard Bona gently swinging in the next hammock while the O'Pears are playing the Park Stage. That really nice guy Jamey, who you just shot the breeze with, turns out to be Paul Simon's percussionist—(he's gotta go play his set with Bokante now). Spy Michael League, repeatedly being approached by festival-goers, always leading the conversation with "Are you having a good time?" Pretty uncommon...

Because the festival is relatively small (limited to about 1800), faces become more familiar each day, they acknowledge you back, you have conversations, you find people from your hometown, etc.

Other "little" things made a huge difference in the experience. The openness of the staff, volunteers, vendors and bartenders was pretty remarkable too. Chat with Leo at the merch kiosk enough to know that he worked last year's festival and came back to volunteer again "'cause he dug it so much." (There was a lot of that going around.) The food vendors would notice that you had really gone for the sesame noodles a bunch of times already and playfully goaded you into trying something new (and equally delicious).

The main food menu—(done by Miami's own resident food celeb Michelle Bernstein)—was interesting and very tasty. And for those who watch foodie shows (such as Top Chef and the like), it was doubly a gas to see Bernstein herself behind the tables for a while each day—(especially since she truly seemed to be enjoying herself along with everyone else). Again uncommon....

For those who, after each day's eight to nine hours of music, still had an appetite for more, there were additional late shows every night just down the main drag at The Alexander Hotel. Two upstairs event rooms—which often served as rehearsal spaces during the day—were outfitted "nightclub style," and not only supplied an additional five sets of music every night, but also a healthy share of the festival's surprises. This was where much of the wildest interplay and cross-pollination played out among the festival's musicians. Along with solo sets from many members of the SP collective and extra sets from artists on and off the day roster, you had many bands combining and recombining to form some unique ensembles. If you had the stamina, staying up to nearly sunrise was worth it, for it seemed the later it got, the more unbridled the musicians became.