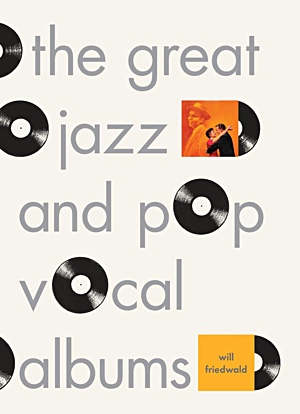 The Great Jazz and Pop Vocal Albums is unique and Will Friedwald, who has extensive knowledge of and affection for singers and songs, has mined an area all his own. Sure, there are books about singers—jazz and pop—and reviews of their albums. Many of them are excellent, but I know of none that select 57 "great" albums and provide a comprehensive analysis of each. This book is, in a sense, the third in a Friedwald trilogy—his 2002 Stardust Melodies was about songs, the 2010 A Biographical Guide to the Great Jazz and Pop Singers was, of course about singers.

Now in 2017 Friedwald addresses the great recordings which he describes as the albums that "absolutely had to be included," that is, the ones that become "a kind of textbook." There is arguably no better critic of singers than Friedwald. In addition to the above trilogy he also wrote a definitive book on Frank Sinatra and collaborated with Tony Bennett on his autobiography. These books are in addition to his many liner notes and countless essays. One of the pleasures of reading books of this ilk is questioning the choices—"Where is so-and-so's album?" and "What in the world is she/he doing here?" Finding fault and entertaining such arguments and questions are part of the fun of such a book. Thankfully, Friedwald has always written for those of us with adult tastes and concerns and thus certain singers were essential. For example, he chose three Doris Day, Jo Stafford, Louis Armstrong and Ella Fitzgerald albums, edging out two each by Frank Sinatra, Sarah Vaughan Nat King Cole and Peggy Lee.

But, Friedwald was likely expecting a little "heat' regarding his sympathetic inclusion of God Bless Tiny Tim as one of the "great pop albums." To place this recording on a pedestal with, for instance, Peggy Lee's "Black Coffee" simply because Tiny Tim introduced the author to music of the '20s seems questionable. (Yes, I listened to the album again but am still not convinced.) However, such quibbling aside, the bulk of his entries shine with good taste and wisdom. Louis Armstrong may not have invented jazz but he arguably invented swing and jazz singing. He is the single most significant and influential creative artist in the world of jazz or pop. Thankfully, Friedwald included three of his recordings—Louis teaming with Oscar Peterson, Bing Crosby and Ella Fitzgerald—and eloquently documented the genius behind the great Armstrong's grit-and-gravel singing voice.

Friedwald also eloquently convinces as to the masterful phrasing of Sinatra, the interpretive depth of Carmen McRae, the emotional resonance of the subtle Peggy Lee and the bottled-sunshine voice of Doris Day. He also shines a spotlight on some vocalists who are now seldom heard. An example is Maxine Sullivan who, Friedwald declares "was the greatest swing band singer ever." Matt Dennis and Bobby Troup are better known as composers (e.g., "Angel Eyes" and "Route 66"). Both men recorded sparingly but Friedwald selects two of their discs from the mid '50s, observing correctly that these two (along with Hoagy Carmichael and Johnny Mercer) were among the earliest to both write the songs and sing them.

In addition to his discussion of the great vocal albums, individual cuts are thoroughly examined, many of which now comprise what is known as the Great American Songbook (GAS). For example four of his selected vocalists included the 1941 DePaul-Ray "You Don't Know What Love Is" in their albums. It becomes obvious that the best singers generally select the best songs. In addition to the beloved standards, this book becomes a wonderful introduction to some unjustly overlooked songs, such as the charming "Junior and Julie" a fine obscurity by Matt Dennis about two kids who aren't even born yet. Likewise composer Richard Whiting is well-known to fans of the GAS but somehow his lovely 1940 song "I Can't Escape From You" has been forgotten.

But Friedwald points out that the magnificent Carmen McRae, who uncovered many musical gems, recorded this inexplicably ignored song as did Bing Crosby. Omissions? Friedwald, thankfully, makes no attempt to distinguish between jazz and pop and I suppose that the hard-core jazz fan will wonder as to the exclusion of such "pure" jazz singers as Mark Murphy. At the other end of the spectrum, some hard-core pop fans may wonder as to the exclusion of artists such as the beloved Beach Boys. Somewhat surprisingly, Friedwald chose only one Billie Holiday album and that was a later one. The 1958 Lady in Satin is recognized as a classic, but to ignore her earlier discs because they were mere collections of unrelated songs distorts the fact that every recording released by Holiday has a central theme of great music. For example, album or not, her glorious 45 pairings with Lester Young are essential listening for any fan of the best popular or jazz music.

I was expecting to see an Irene Kral recording, perhaps Kral Space or Gentle Rain. Every singer that I talk with is well aware of and embraces Irene. Jack Jones is also noticeably absent. But in an email to me Friedwald did say "I wish I could go back and include a Jack Jones album—a problem is that he made so many that are so great." That is true and the one I would suggest is his 1998 Jack Jones Paints a Tribute to Tony Bennett with jazz pianist Mike Renzi. A critic's task is to help people see more in the work than they might without him or her.

Will Friedwald accomplishes that task and is also very enjoyable to read. He is an enthusiastic and most knowledgeable champion of quality pop and jazz vocals and The Great Jazz and Pop Vocal Albums is a wonderful addition to his impressive canon. This book is both informative and entertaining and is essential for those of us who share his love for sophisticated vocal arts.

Roger Crane, the Song Scout, is a song maven who knows who wrote it, from what show/movie, what year and introduced by whom.