By Dave Wayne
February 4, 2016
Sign in to view read count 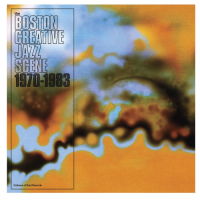 Though New York City remains first and foremost in everyone's mind as the "Jazz Capital of the World," aficionados know that many other cities in the US and abroad support significant and artistically important jazz communities. Boston looms large among the most important jazz cities, worldwide. The birthplace of Harry Carney, Roy Haynes, George Russell, Sonny Stitt, George Wein, Makanda Ken McIntyre and Charlie Mariano, Boston is also the home of two of the most forward- looking institutions of higher musical education: the Berklee School of Music and the New England Conservatory. Tony Williams, Sam Rivers, Jaki Byard, Ran Blake, and Cecil Taylor all spent (and in Blake's case, continue to spend) formative artistic years there. Boston also hosts a vital and extremely active local jazz scene that rivals New York City's own home-grown crew. Partly fed by the continual stream of first-rate young musicians attending Berklee and NEC, the healthy scene in Boston is also maintained by a coterie of local musicians who simply want to play the music they love.

Composer, author and still-active jazz musician Mark Harvey details all of these developments (and more) in a profusely illustrated, exhaustively annotated 80-page book that accompanies The Boston Creative Jazz Scene, 1970-1983, a fascinating and diverse collection of daring, adventurous and obscure avant-garde jazz tracks culled from privately-issued albums which, for the most part, saw very little distribution outside of Massachusetts. The book itself is incredibly valuable, as Harvey (now a professor at MIT who still leads his own big band, the Aardvark Jazz Orchestra) was deeply involved in the Boston creative music scene from the start. Though he acknowledges the contributions of artists such as Taylor, Rivers, McIntyre, Blake, and Byard, his focus is on the lesser-known musicians who where completely dedicated to the local avant-garde scene during the late 20th Century, such as bassist John Voigt, guitarist Jon Damian, pianists Lowell Davidson and Abdul Hannan, and drummer Syd Smart; none of whom, for whatever reason, are featured on the album. Admirably, Harvey ties their careers, and those of the musicians featured on the album, to several important contemporary jazz artists active today, such as Joe Morris, John Medeski, the Istanbul-based improvising collective Konstrukt, and trombonist Tom Plsek. Significantly, Harvey also discusses the venues that hosted these musicians' activities, some of which were continuous extravaganzas featuring dozens of bands and running more-or-less continuously over several days.

The stylistic sweep of The Boston Creative Jazz Scene, 1970- 1983 is vast, encompassing everything from free jazz to funky fusion. On the free- improvised tip, Harvey's quartet—populated by talented multi- instrumentalists—sounds like a much larger band with a Dadistic sensibility that is heavily influenced by the Art Ensemble Of Chicago. The Phill Musra Group, by contrast, is more aligned to the visceral "ecstatic" school of free jazz improvisation. Like Harvey's ensemble, Musra's trio is comprised of multi- instrumentalists. The sound of Michael Cosmic's electric keyboard emerging from the wall of saxophone squeals and crashing multi- percussion on "The Creator Is So Far Out" is completely unexpected, and only one of many such surprises to be found on this stellar collection. By contrast, Musra's "Egypt" is a delicate, dark-hued trilogue for flutes, musette, kalimba and malleted drum set.

Various types of jazz-funk-rock fusion comprise the remainder of this collection. The music of Thing, whose sole privately- released album was reissued in its entirety by Porter Records in 2008, reflects the massive influence that Miles Davis' electric music had on many up-and-coming jazz musicians at the time. Led by alto saxophonist and Chicago native Arni Cheatham, Thing's sound is equally informed by the more iconoclastic sounds emerging from his hometown: notably Joseph Jarman, Anthony Braxton, and Sun Ra. Both "Sketch" and "Road Through The Wall" come across as free-form funk excursions, with saxophone and trumpet solos wailing over icy Rhodes piano, wah- wah guitar, popping backbeats, and James Jamerson- inspired electric bass lines. Worlds' (also known as The Worlds Experience Orchestra) recorded two impossibly rare albums in the 1970s, and the track featured here, "9 Degrees Black Women Liberation" is a tantalizing glimpse into a sound world that bridges the gap between the work of Gil Scott-Heron, post- bop, and contemporary hip-hop. Led by bassist John Jamyll Jones, and featuring poet / vocalist Roy Hall (in addition to 2/3rds of the Phill Musra Group), Worlds' is a large ensemble that's equally at home playing bebop, free jazz and funk, though the focus here is clearly on Hall's rap.

Unlike the other artists featured here, the bands led by Stanton Davis and Baird Hersey weren't done live and on a shoestring budget. Though both benefit from the use of a recording studio, both albums were privately issued, and were never released by a commercial record label. Davis' album, Brighter Days, reissued by Cultures of Soul in 2011, is a diverse collection of phantasmagorical and complex jazz-rock-funk fusion pieces that reflect, in varying measures, the influence of Parliament Funkadelic , Mahavishnu Orchestra, and George Russell (Davis' teacher at NEC). "Play Sleep" (credited to Jan Garbarek on the original album cover) is a brooding composition that features Davis' clarion trumpet and Delmar Brown's rippling acoustic piano over a shifting backdrop of small percussion, phased bass, seething electronics, and pulsating drums. Hersey's track, "Herds & Hoards," is from the first Year of the Ear album. The guitarist, who also recorded free improvised duets with percussionist / vocalist David Moss and led the psychedelic rock band Swampgas, went on to record two excellent commercially-released albums with Year of the Ear (Lookin' For That Groove, Arista/Novus, 1978 and Have You Heard?, Arista/Novus, 1979). Like Davis (who was also a member of Year of the Ear), Hersey sought to fuse the seemingly disparate worlds of jazz, funk, rock, and avant- garde composition in a personal way.

The artistic success of both Davis' and Hersey's ventures is immediately apparent on both tracks, and both offer tantalizing glimpses into dusty corners of the recent musical past that are well worth re-investigating. Much the same could be said of all nine tracks in this collection. Sadly, original copies of many of these records (except Hersey's) regularly fetch several hundred to over a thousand dollars apiece on today's collectors' market. Though some of these albums have been reissued in their entirety, collections such as these are the only way for the present generation of jazz fans to actually own a physical copy of this rare and exceptional music. Yet, Boston's creative music scene is sufficiently deep that several more such collections could easily be assembled. Cultures of Soul and Mark Harvey are to be commended for putting together this compilation in a way that honors the entire scene and places it into a broader perspective.