By Wade Luquet
February 4, 2016
Sign in to view read count 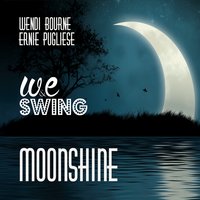 Through a chance meeting at a weekly jam session at Round Guys Brewery in Lansdale, Pennsylvania, a group of musicians became friends and began to gel as a group. The jam organizer Mike Mahomet, has a small recording studio blocks away and invited the talented group to record some tunes. The group known as W&E Swing is lead by singer/guitarist Wendy Bourne and guitarist Ernie Pugliese who were joined by many of the Wednesday night regulars on this delightful CD. Like its title suggests, the tune selections are all about the moon, ably arranged by Pugliese and beautifully sung by Bourne. Her strong clear voice is reminiscent of the great contemporary jazz singers including Diana Krall and Jane Monheit. No doubt this CD was built around her voice backed by strong arrangements and musicians, and expertly produced and mixed.

Drummer Alex Maio and bassist Matt Turowski keep the band moving perfectly in the pocket throughout the recording. Turowski's swinging bass licks are both lyrical and driven with his agility on the fret board and clarity most evident on "What a Little Moonlight Can Do" played at breakneck speed. A swinging version of "Fly Me to the Moon" is accented by Ed Neiderhiser's muted trumpet and Pugliese' melodic guitar solo. A slow rendition of "Moonlight in Vermont" with pleasant phrasings by Bourne is made even more captivating by Eric Loken's vibraphone accents and solos. The tune choices remind the listener how many songs are written about the moon, and the beauty of the works and music reminds us why.

Moonshine is a lovely first album for W&E Swing. With talented musicians, a charming vocalist and music made by a group of friends who simply met at a jam session at a brew pub, it has a good back story along with a good sound. We can only hope for more from the band.

How High The Moon; It's Only A Paper Moon; Moon River, It Must Have Been Moonglow; What A Little Moonlight Can Do; Moondance; Fly Me To The Moon; Shine On Harvest Moon; Moonlight In Vermont; Old Devil Moon.