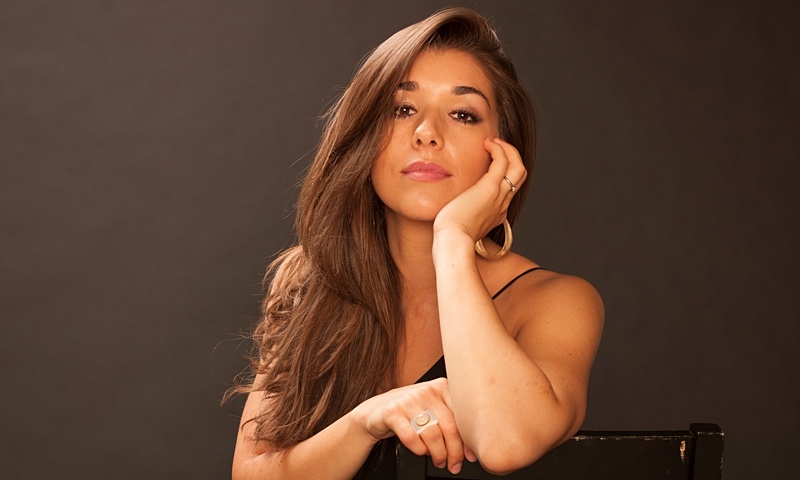 By R.J. DELUKE
April 20, 2015
Sign in to view read count
Music started tugging at the sleeve at the age of three for Thana Alexa, a New York based singer who began making music there as a violinist, moved to Croatia where she discovered jazz, and returned as a singer poised to sweep into a successful career.

It started with the piano—kind of. Her tinkering with a toy piano so impressed her mother that she nearly started her career as a budding pianist. Instead, she gravitated to violin, at which she later excelled. Now, via Croatia and the New School for Jazz in New York City, she has released her first album, Ode To Heroes (Jazz Village) on which she displays her vocal chops and songwriting skills while paying tribute to important people in her life—musicians and family. Guests include Antonio Sanchez and Donny McCaslin. She's also been making big waves at gigs in New York and hopes to spread her wings beyond the Big Apple.

Hers is the career that almost wasn't. She didn't envision music as a full-time proposition and was studying psychology at Northeastern University in Boston. But in the end, it seemed inevitable. Fate had something else in store.

It was at age three that she disappeared during a birthday party, being found eventually by her mother in the basement of the house. Alexa had wandered there and discovered a small keyboard. "I was sort of plucking out these nursery rhymes, these tunes that I had heard," she recalls. Her mother "freaked out. She said, 'We have to do something about this. This is very rare.'"

The plan was to approach a nearby music school. The school didn't take kids under six, but her mom was determined the talent had to be nurtured. A meeting was set up. "So we went for this meeting and sat down with the dean of the conservatory. They brought in their piano teacher and a piano. But actually I had my little toy piano on my lap. I carried it to the meeting with me," says Alexa. "I got so scared I wouldn't play." Despite urging from her mother, the girl wouldn't budge. "I got cold feet. When I realized the meeting was coming to a close—everyone was saying, 'Now you know why we don't take children under the age of six. Maybe you can some back when she's a little older.' When I realized in my child's mind that this meeting was over, I guess I played something. I don't know what I played, But I played a little something."

"Then they said, 'Maybe we can set you up with some lessons.' And out of the blue I said, 'I don't want to play piano. I want to play the violin.' My mom didn't even know that I knew what a violin was. They brought in a violin teacher who unpacked the violin. I remember the teacher opening the green case and opening up the violin. And I said, 'Yes. I want that.'"

Alexa was too small for the instrument. The teachers suggested she return in a year if there was still interest.

"I don't remember this, but my mother swears that almost to the day, she was cooking in the kitchen and I came down and said, 'Mom, I'm ready to play the violin.' She had completely forgotten about it. But that's how it started. I started on one of those little violins and progressively kept playing."

Alexa played violin seriously for 13 years. She could sing, but thought violin the calling, perhaps even being a concert violinist. She was in the first chair of youth orchestras and traveled out of town for concerts. Then after she completed elementary school, her family moved to Croatia. "The reason I say I'm from Croatia is because my formative years were spent there. I feel like a developed a lot more there than I did here. In Croatia, in trying to learn the language her only connection back to English, in a sense, was when she sang. "That's how that took the place of violin in a little way. I just ran with it. Somehow, jazz and blues and soul were the genres that resonated with me. I started taking voice lessons at the Rock Academy in Zagreb, Croatia. I started doing performances. Sooner or later it became time to apply for colleges in the States."

"Along with your college application, they to see extracurriculars and show activities." says Alexa. "So I thought I might send a demo. Me singing some standards. We lived down the street from the only jazz club in Zagreb, which was called the BP Club. It was owned by Boško Petrović. He organized the demo for me and played on it. It was recorded in his club. He thought he was doing a kid in the neighborhood who wanted to do her thing a favor. But when I came and started singing—it must have been extremely raw—but he saw potential in that. So he took me under his wing and brought me to different jazz workshops. Some in Croatia and some out of Croatia. I attended the one in Croatia every year for five years. I ended up teaching there and performing there later on. He really gave me my first exposure to jazz and to performing. I had my first paid gigs with him. Opened my first jazz festival with him. He had trust in me and I had trust in him. It was a wonderful thing. He passed away, unfortunately, a couple years ago. I owe a lot to that man."

She adds with a sparkle, "It seems strange. You go to the Balkans and discover American music."

But before seeking a degree in jazz, Alexa was a psychology major at Northeastern University. "Music was a prominent fixture in my life, but I didn't grow up thinking that it could be an actual career choice. My parents have always been very supportive of anything that I ever wanted to do," she says. "But somehow it didn't seem a possibility to me. I started college with a safe degree. And I had one year of total darkness. That was a wake-up that something was really missing.

"I had this one jazz course on improvisation every week. We learned 'Goodbye Pork Pie Hat.' Something about that tune, the harmony and the actual version that I heard, with John Handy's solo. It spoke to me on such a deep level that I felt like I needed to express what I was going through some how. But at that point I wasn't really writing my own music. So I figured I would write a vocalese and write lyrics to the unbelievable music that had touched me so deeply."

For the inquisitive Alexa, it was the first jazz instrumental she had been exposed to. It had a profound effect. She has re-worked the tune as "The Wanderer" on her debut recording, weaving into it her original lyrics.

She explains, "The lyrics speak about my evolution and me realizing that music is something I need to do. That's a very honest title. I felt like I was wandering around not really knowing what I was going to do. Then I honed in on what my passion and my dream was. That song gave me a lot of strength to go forward."

When she returned to Croatia during school breaks, she attended a workshop the New School had in Italy. "I said, 'This is what I need to be doing.' It was like a crash course in jazz on a level that I had never experienced before. And I knew, right then and there that it had to happen." She continued studying psychology and earned her degree in it, while at the same time getting a jazz degree from New York in Manhattan. "It's not really called a double degree, because you're basically enrolled in two colleges and you get a degree from both colleges," she noted. "But it was a five-year program and I did jazz alongside the psych degree."

Going to two colleges simultaneously took up a lot of time, but Alexa occasionally had the chance to perform. The drummer and educator Bernard Purdie was an early mentor.

"He took me under his wing and taught me music and business," Alexa says."That is one thing I really owe to Bernard is the study of music business with him, I was able to discuss contracts. I was able to discuss getting paid for gigs. I was able to discuss how to go about the business part of music, which is not always what you learn in music school. I was in Bernard's R&B ensemble every semester that I was at New School. We actually recorded a album that never came out. Hopefully it will come out, or we'll re-record it at some point. I wrote music for his R&B ensemble. I would do all of the vocal arrangements. So in his class, I got a lot of music, but I also got the arranging experience. He would put me in charge of doing all the vocal arrangements and figuring out who was going to sing what, doing backgrounds. Then writing my own tunes, where I would have to write everything, from the bass lines and what the piano was playing, to the vocal lines. That was a great introduction into more serious composing and arranging. It was a little easier to write and arrange pop-sounding songs, R&B songs, than intricate jazz compositions. That allowed me to get my foundation. I kind of took off from there."

Alexa began hitting gigs after graduating. Going to jam sessions. Meeting people. She met Christos Rafalides a vibraphonist from Greece, who was known to play with singers. They played at his apartment. "There was something, musically, that just clicked with us," she says. "We've been playing ever since. I've played in his band. He's played in my band. He's on the 'Footprints' track on the record... He's exposed me to a lot of real work in New York. I got to play with great people right off the bat, who kicked my butt. And I got a great learning experience from it. It's fantastic. Equally so, I've been singing a lot with guitarist Gene Ess. We've done two records together.

The newest, Eternal Monomyth (Simp Records), comes out in April 27. "From him I've also gotten the chance to play with a lot of great musicians. Clarence Penn, Ari Hoenig, David Berkman, Gene Jackson. Some great, experienced, seasoned musicians. His music is very instrumental, so it's forced me to get out of my comfort zone and become a musician."

Ode to Heroes was recorded in 2012, but took a bit to get it released this year.

"It's a great feeling. It's been a long time coming," says Alexa. "A lot of the people on the record I do play with on a regular basis. Which is great, because since we've recorded, it gives me the opportunity to develop the music live."