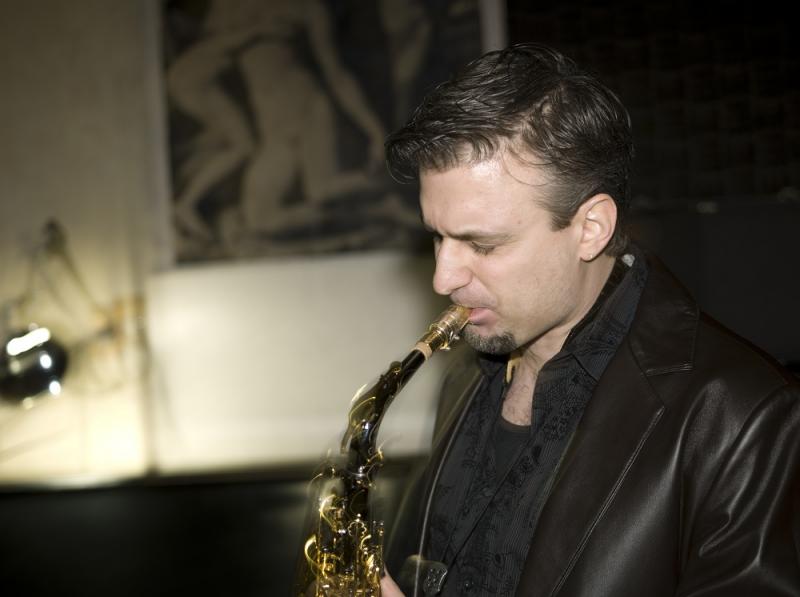 Born on July 25, 1970 in New Haven, Connecticut, Mike DiRubbo began his musical life as a junior high school clarinetist, and switched to alto saxophone at 12. A primarily self-taught saxophonist, he developed into a talented instrumentalist drawn inexorably to the notion of improvising. At a high school band concert, Mike had the opportunity to perform with the Dwike Mitchell—Willie Ruff duo, an experience that would add to his desire to be a professional musician and also spark his interest in jazz music.

In the fall of 1988 DiRubbo entered the Jackie McLean Institute of Jazz of the Hartt School, University of Hartford, where he studied the tradition and history of African-American music and earned a Bachelor of Music degree. Mike's instructors included master saxophonist Jackie McLean, pianists Hotep Galeta and Peter Woodard, bassists Nat Reeves and Rick Rozie and classical saxophonist Ken Radnofsky.

Mike has six CDs as a leader: From the Inside Out (Sharp Nine Records 1999); Keep Steppin' (Criss Cross Jazz 2001); Human Spirit (Criss Cross Jazz 2003); New York Accent (Cellar Live 2007); Repercussion (Posi-Tone Records 2009) and his latest, Chronos (Posi-Tone Records 2011). He has also been featured on seven of trombonist Steve Davis' recordings: The Jaunt; Crossfire; Vibe Up! ; Systems Blue; Outlook; Live at Smalls and Images. Mike can also be heard as a sideman on the Fresh Sounds, Criss Cross, Double Time Jazz, Steeplechase and Knitting Factory labels. DiRubbo has been featured in articles, reviews, and interviews in magazines and online periodicals such as All About Jazz, Saxophone Journal, Hothouse, Jazz Times, Downbeat, Jazz Journal, Cadence, Swing Journal, Jazz Folio, JazzWise, and All Music Guide.

Continuing the circle of knowledge, DiRubbo has been a resident artist at the Litchfield Jazz Camp since it's inauguration in 1996. Most recently he has been a guest instructor at SUNY Purchase in NY, at William Patterson University's jazz program, at New York University, at the Jackie McLean Institute and is a saxophone tutor at the New School in NYC. He has also conducted master-classes at Baldwin Wallace University in Ohio, Loyola University in New Orleans, and at the Jackie McLean Institute of Jazz at the University of Hartford.

I knew I wanted to be a musician when... I fell in love with the sound of the saxophone.

Your sound and approach to music: I'm mostly hearing a sound that is closer to a tenor saxophone. I'm trying to keep an open mind and play with musicians on a high level as much as possible.

Your teaching approach: I think the fundamentals are very important. Sound and time concept are things that are hard to reverse if not learned properly from the beginning. I try to get the student to use their ear more if they come from a reading or theoretical background or the reverse if they only use their ear.

I would like to some day collaborate with Brian Blade. We share the exact same birthday, which I always thought was interesting. He almost made my first CD back in 1994, but he was super busy with Joshua Redman back then.

I really dug the sound in Sweet Basil, which then became Sweet Rhythm.

Your favorite recording in your discography and why? I have tunes from each record that I like for different reasons. I always like the way "Introspection" turned out on Keep Steppin'. I'll pick the most recent, Chronos, as far as my playing goes.

The first Jazz album I bought was: New Wine In Old Bottle, by Jackie McLean with the Great Jazz Trio.

What do you think is the most important thing you are contributing musically? I hope my music lifts people's spirits and helps them deal with their hardships or celebrate their happiness. Music affects me this way so I try to reciprocate in my music. I always strive for authenticity and sincerity in my music.

At the age of 40 I still love playing video games of all kinds!