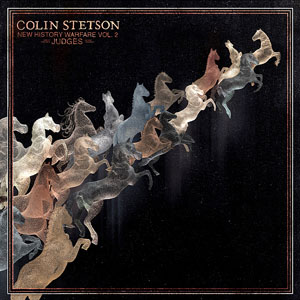 First question, how does he do this? Recorded without loops or overdubs (except for one track, where he plays multiple French horns), Stetson applies a certain logic and order to the physically demanding act of playing a saxophone by way of circular breathing. Stetson's use of continuous sounds—on alto, tenor, or gigantic bass saxophone—without pause, include the rhythmic tapping of the keys, breathes, fingerings, vocalizations, overblown sounds, echoes and reverberations. Stetson is a one-man band, maybe even a one-man studio.

All of his orchestration was captured in the studio, using 20 microphones. The effect is one that mimics a small band or overdubbed tour de force.

Stetson's extraordinary technique has been heard in the bands Belle Orchestre and Sway Machinery, on recordings by Tom Waits, and the pop bands Arcade Fire, TV On The Radio, and, currently, with Bon Iver.

He released Volume 1 (Aagoo Records, 2007) a few years back, but with this second volume he has enlarged and strengthened his palate. From the opening, ocean liner horn blasts of "Awake On Foreign Shores" to the danceable (in your head) "Red Horse (Judges III)," he presents an extremely accessible sound. He can spin out Steve Reich-like minimal passages like "The Stars In His Head Dark Lights Remix)" or Philip Glass-inspired repetition on "From No Part Of Me Could I Summon A Voice." Stetson is inspired as much by Evan Parker as he is Jimi Hendrix. With the help of spoken word goddess Laurie Anderson on four tracks, he opens the sonic panorama into even something larger and more imaginative. With vocalist Shara Worden, the pair delivers a simmering blues on "Lord I Just Can't Keep From Crying Sometimes," counterbalancing the gospel with the rattle and hum of Stetson's vocalized horn. It is pure revelation.

Awake On Foreign Shores; Judges; The Stars In His Head (Dark Lights Remix); All The Days I've Missed You (ILAIJ I); From No Part Of Me Could I Summon A Voice; A Dream Of Water; Home; Lord I Just Can''t Keep From Crying Sometimes; Clothed In The Skin Of The Dead; All The Colors Bleached To White (ILAIJ II); Red Horse (Judges ll); The Righteous Wrath Of An Honorable Man; Fear Of The Unknown And The Blazing Sun; In Love And In Justice.