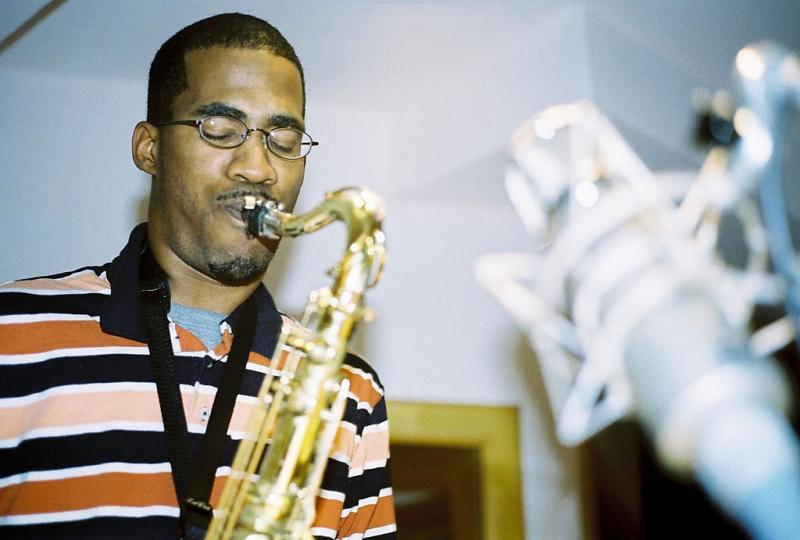 view slideshow
BY JAMES BRANDON LEWIS
March 24, 2012
Sign in to view read count
Meet James Brandon Lewis:
Saxophonist/composer James Brandon Lewis was exposed to jazz, gospel, and R&B and at an early age began his journey into the realm of music. He attended Buffalo Academy for the Visual and Performing Arts located in Buffalo NY. Upon graduating, James would continue his musical pursuit At Howard University, where he was blessed to have played with some of the finest musicians in the world, including Benny Golson, Geri Allen, Wallace Roney, Bill Pierce, and many others.

James has toured Japan with the Howard University Jazz Ensemble Performing Concerts to raise money for the tsunami victims. .James also played at the Kennedy Center Honors with the Howard University Jazz Ensemble, backing John Legend, k.d. lang, and Vanessa Williams . James Holds a B.M. from Howard University, a Master of Fine Arts degree from California Institute of the Arts. James is an alumnus of the Banff Jazz Residency in Canada where he studied with Joshua Redman, Dave Douglas, Tony Malaby, Don Byron, and Hank Roberts. He has also been a featured artist on The Word Network, which boast about 30 million viewers.

James was selected by pianist Matthew Shipp to participate in the Atlantic Center for the Arts 141st residency. James released his debut CD, Moments, in 2010 and is currently working on his second Album Divine Travels, featuring William Parker, Gerald Cleaver and poet Thomas Sayers Ellis.

I knew I wanted to be a musician when...
I realized that music touched my emotional center as a kid, and then the discovery of the many greats of the past.

Your sound and approach to music:
"Music is the healing force" (Albert Ayler). I believe that to be true . My sound and approach are based in emotion and spirituality, having grown up in church, and not just being influenced by the music but observing the affects the music had on the people .

I am always pushing to play my experience, and speak that which I know of myself .

Your teaching approach:
Learn the fundamentals and the rest is up to you to discover, and enjoy.

Your dream band:
William Parker, Gerald Cleaver, and of course bands with my close friends.

Favorite venue:
Any venue that allows me to express who I am.

Your favorite recording in your discography and why?
The first jazz album I bought was: 1949 Concert & All Stars 1950 1951, by Charlie Parker.

What do you think is the most important thing you are contributing musically?
My sound and translating my emotion to music. There are other things in the works that I am developing.

CDs you are listening to now:
Ornette Coleman, The Complete Science Fiction Sessions(Legacy).

How would you describe the state of jazz today?
That word is very interesting, "jazz," but things are progressing.

What are some of the essential requirements to keep jazz alive and growing?
Allowing people to play their experience.

What is in the near future?
Recording more and touring with trios with William Parker, Gerald Cleaver, Joanna Malfatti and Eric Klerks. Also a woodwind trio I am in with Maryclare Brzytwa and Kevin Robinson Ensemble.

By Day:
I am constantly in search of beauty and the meaning behind the notes, and am driven to play my own experience.

If I weren't a jazz musician, I would be a:
scientist/inventor.