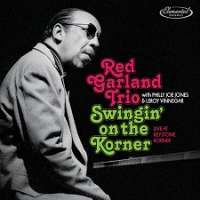 Dismissed as a subpar "cocktail pianist" when he joined Miles Davis' first great quintet in 1955 when Davis had returned from chemical exile, William "Red" Garland would go on to define mainstream jazz piano on a series of recordings (as leader and sideman) taped between 1955 and 1962. Readily identifiable was his easy swing, supreme command of the blues and his liberal use of block chords that became a Garland trademark. The pianist would anchor a piano trio with bassist Paul Chambers and drummers Philly Joe Jones and Art Taylor that would be the epitome of what jazz is.

After the release of When Skies are Grey (Prestige, 1963) it would be nine years before Garland would release another record (that being The Quota (MPS, 1971)). Rock music had replaced jazz as America's popular music and Garland's brand of jazz was found lagging in popularity. The present Swingin' on the Korner: Live at Keystone Korner documents Garland with longtime associate Philly Joe Jones on drums and his most simpatico bassist after Chambers, the West Coast's own Leroy Vinnegar. Recorded at San Francisco's Keystone Korner adds to the excitement of this previously unreleased music on Elemental Records.

Recorded between December 6th and 10th, 1977, Live at Keystone Korner captures Garland in his twilight (he died in 1984) in the company of close friends. His empathy with his band mates is readily felt in his relaxed and confident delivery on 16 songs over the two hours of music documented here. There are the ballads: "Love for Sale," "On Green Dolphin Street," "Autumn Leaves." Garland has a handle on this style. He is not flashy, but he always finds Charlie Parker's "pretty notes." Jones' ballad drumming is full of quiet fire and Vinnegar's bass playing is suitably understated.

Where the trio burns is on the blues. Vinnegar is a walking genius, who can direct the tempo and momentum like a catcher at the World Series. "Blues in Bebop," "Straight, No Chaser," and "Bag's Groove" begin at a high simmer proceeding to a full boil. The sonics of the performance are better than expected, with Vinnegar's bass well out in front with Garland's piano. Jones plays with that fire Miles Davis always admired. Red Garland has always been underrated while he has always produced music of a consistently high quality and value to the American discography.