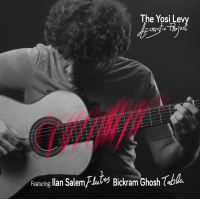 Beyond the element of surprise found in the music of exotic lands, there is the alluring mystery which emanates from the ancestral origins of the culture itself. Guitarist Yosi Levy, with The Acoustic Project, has produced an amazing fusion of traditional Middle Eastern and Indian music injected with improvisational jazz textures and nuances, offering an amalgamation which sounds vaguely familiar yet remains furtive and mystical.

Levy is an accomplished guitarist with an innate intellectual knowledge of Israeli music, and is joined on this project by the prodigious flutist Ilan Salem, also from Israel. They are both consummate scholars of their instruments, and respected global musicians who went back to their roots for this recording. They are accompanied by no less than the highly heralded Bickram Ghosh on the tabla. Ghosh is considered one of the true masters of this Indian instrument, and his voluminous discography as leader and sideman speaks for itself.

Beginning with "For Bickram," the pace is literally set with Levy and Salem intertwining with Ghosh's complex Hindustani rhythmic cycles. The common bond in the merged sound of this record might be the assembled tempo patterns of long and short durations, upon which the melodies are layered and improvised. "Little Ana," maintains the rigorous energy level which is tapered off on the rearranged Israeli folk ballad "Hechalil." "Yemenite Song," is another ethnic song, but is given a recharged adaptation with a cross-cultural flair.

"Riding," has strong Arabian influences, with Levy playing a droning pulse in a hypnotic configuration. "Morning Roses On The Freeway," is reminiscent of a straight ahead fusion number with flashes of gypsy jazz thrown in for good measure. "Oasis," is as the title infers, a quiet, safe haven for resting after crossing the frenetically blazing sands. Salem plays with colorful imagery on "No Name," setting a strolling mood, with plenty of time to arrive at the secreted destination. They conclude the record with "On The Tlv, Madrid, Nyc Line," which is quite fitting, as all three of the members are high mileage performers, and seasoned world travelers. There are strains of European baroque in this piece, interlaced with a restless spirit of an awaited departure.

The Acoustic Project is a mesmerizing production of the highest caliber. These three virtuosos perform from beginning to end with an uncommon wisdom of cohesion rarely heard. The tempos laid down by Ghosh in which Levy and Salem must execute their melodies and solos are relentless and must be adhered to in rapid time. This is very sophisticated and complex music, steeped with historical annotations, that has been hurled forward into the modern age, and is best left to experts like this gifted trio who have the background, technique and finesse to accomplish the mission.