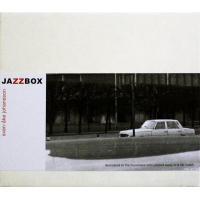 Funny how listening to the five-CD Jazzbox by free jazz drummer Sven Ake Johansson may remind you of the British punk rock band The Clash's first hit single "Train In Vain" (1980). Like Joe Strummer and Mick Jones, Johansson's career has been one that has worked to challenge the language of American music. In The Clash's case, it was American pop and disco. For Johansson and his European colleagues (Peter Brötzmann, Manfred Schoof, Peter Kowald, and Alexander von Schlippenbach) it was the 1960's New Thing of Albert Ayler, John Coltrane and Eric Dolphy.

In the middle of recording The Clash's seminal London Calling (CBS, 1979), the rebellious punk band went about making an American-styled R&B single. "Train In Vain" sounded more American, then American singles as it shot up to number one in the States. Johansson's career has tracked the European free scene since his earliest recordings with Brotzmann—Machine Gun (FMP, 1968), Schlippenbach's Globe Unity Orchestra, Per Henrik Wallin and in his own projects. Although he branched out into musical theatre, painting and design, he has kept pace with European jazz collaborating with Andrea Neumann, Axel Dorner, Sten Sandell, Raymond Strid, and Rudi Mahall.

With Jazzbox he proffers American jazz, circa 1955, in a more compelling presentation than, well, American jazz musicians.

Heard on Vol. I and Vol. II, his Cool Quartett is easily mistaken for a Miles Davis session. Johansson's command to maintain the melody is paramount. The quartet is fronted by trumpeter Axel Dörner, known as a minimalist improviser, who has a knack for interpreting the music of Thelonious Monk, as he does in the band Die Enttäuschung, and pianist Zoran Terzic. Covering the Great American Songbook, the four, including bassist Jan Roder play George Gershwin, Rodgers and Hart, Cole Porter, and Jerome Kern. Knowing the pedigree of these players, you might expect the avant-garde, but the melody doesn't fall far from the tree. The cleverness here is the simple commitment to the original song. The quartet's less is obviously more. Even the less than familiar tracks penned by Dörner (there are five) are strikingly spare and beautiful.

The quartet stretches to the Cool Sextett with the inclusion of saxophonists Tobias Delius and Henrik Waldsdorff on three tracks recorded live in 2009. In this setting the music expands and so does the presentation. Delias honks a bit, intertwining his horn with Waldsdorff as the music migrates from the studio to the club. Johansson revisits vocals on "Night In Tunisia" and "You've Changed" as he did on Hudson Riv (Grob, 2003) with his unique Swedish/German accent. His accent draws back the curtain for those mistaken into believing the music is just a reissue from the Prestige Records vaults.

The two strongest volumes might be Tune Up, a quartet with Delias, Roder, and Japanese-born, Berlin native pianist Aki Takase and the trio Candy with Dörner and bassist Joe Williamson. Takase is a proper interpreter of Monk and Duke Ellington. Her comping behind the saxophonist's blabbing horn provides a running commentary until she takes an aside of a solo on "Tangerine." The music here seems rooted in the antics of the Amsterdam's New Dutch Swing and perhaps that is the influence of Delias.

In Trio, the strength of Johansson's vision is amplified. With brushes on his drum pads, he spurs Dörner to the clearest expression of melody and the brightest music. Their double- time take on "The Way You Look Tonight" and the Sonny Rollins favorite "I'm An Old Cowhand" are as hip today as they were in 1957. The disc ends with "Stars Fell On Alabama," a song certain to stump nearly anyone taking a blindfold test. They will certainly identify the Americans Freddie Hubbard or maybe Tony Fruscella.

Tracks: Star  Eyes; Foreground Behind; Whats; Every Time You Say Goodby; Undreground Above; My Heart Stood Still; Background Beneath; Embraceable You.

Tracks: Bernie's Tune; Broadway; Long Ago And Far Away; Mine; Sat It Isn't So; I'm In Love; Let's Face The Music And Dance; Night in Tunisia; Tune Up; You've Changed.

Tracks: The Song Is Yo U; Tangerine; Tune Up; Valse Hot; What A Difference A Day Makes; What's New; Old Black Magic; Darn The Dream; Cool Blues; Day By Day.

Tracks: Candy; You stepped Out Of A Dream; Over Man; To Close For Comfort; I'll Be Seeing You; The Way You look Tonight; I'm An Old Cowhand; Old Devil Moon; I Can't Get Started; Stars Fell On Alabama.