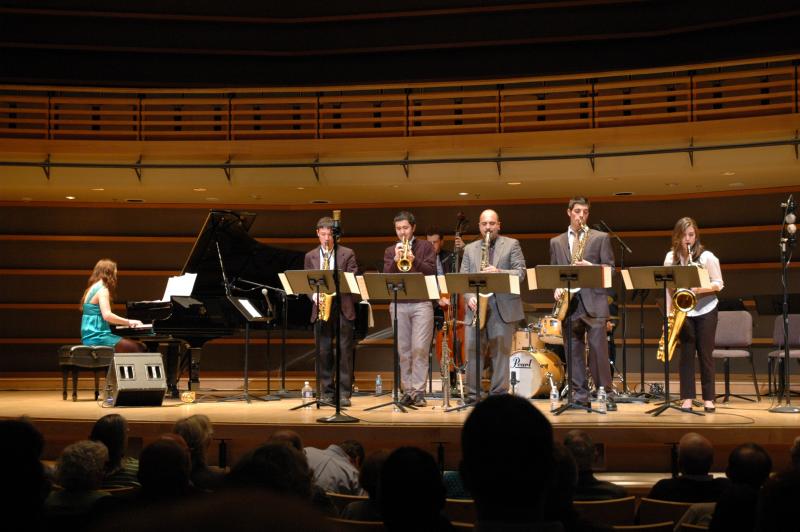 This was the final concert of the 2010-2011 season of the popular Jazz Up Close series, celebrating the legendary Thelonious Monk, organized by pianist/curator Danilo Pérez. It consisted of two disparate sets. The first brought together young musicians from the Berklee Global Jazz Institute, based in Boston, and the Boyer College of Music and Dance at Temple University, Philadelphia. Their combined forces performed music based upon the landmark Thelonious Monk Orchestra at Town Hall (Riverside, 1959) concert. The original, historically significant event featured arrangements by Hall Overton in close collaboration with Monk. As Monk biographer Robin Kelley pointed out in his pre-concert lecture, despite some dismissive reviews at the time, the Town Hall performance represented a pivotal step in the recognition of Monk as a major figure in the jazz pantheon. The audience went wild, and the concert, along with Monk's extended stints at the Five Spot Café, led him from relative obscurity to the status of a virtual cult figure.

The young musicians, led by Berklee faculty member and saxophonist Marco Pignataro, with Temple faculty and saxophonist Dick Oatts conducting the large ensemble, performed with enthusiasm and competence. It's important to remember that some of the greatest jazz musicians accomplished major work in their late teens and early twenties, the most notable instance being Clifford Brown, who died in a tragic car accident at the age of 26, and who, by that time, had changed the face of modern jazz. These youngsters, such as pianist Caili O'Dorethy, trumpeter Dave Neves, bassist Zach Brown, and drummer Roberto Giaquinto, played professionally, showing strong improvisational capabilities, and captured the nuances of Monk's composing and playing, with bended blue notes, quirky dissonances, and shifts in syncopation occurring within a swinging, hard bop rhythmic and harmonic foundation. The horn players shone brightly against O'Dorethy's more reserved playing, with lung power and clarity not heard in most elders, with the notable exception of Sonny Rollins.

The set began with a duet version of "Ask Me Now," featuring Pérez and Pignataro in a lively sax/piano interchange. A septet of students then came on to perform a rocking version of "Thelonious." Two additional players were added for the ballad "Crepuscule with Nellie," and "Think of One." The septet then played "Monk's Mood," which was followed by a full big band version of "Little Rootie Tootie," led by Oatts. The instrumentation and arrangements were suggested by, but not the same as, those of the Town Hall Concert.

After the performance, Pignataro told All About Jazz: "'Thelonious' and 'Monk's Mood' were transcribed from the Town Hall original recording by one of our students from the Berklee Global Jazz Institute, Eyal Hai. The other small ensemble pieces were arrangements written by Don Sickler, and the big band version of 'Little Rootie Tootie' was the original one arranged by Oliver Nelson. However, all of the arrangements got highly modified, edited and readapted by Danilo at the rehearsals, in order to fit our ensemble and portray a wider global jazz influence."

Following the intermission, Pérez engaged Martial Solal in a conversation about the legendary Algerian pianist's remarkable career. Or was it the reverse? Solal's mischievous humor nearly overwhelmed Pérez, who accepted his diminished role with grace. A question from the audience did, however, prompt Solal to fondly recall his friendship with the late Bernard Peiffer, a world-class pianist often compared to Art Tatum, who relocated from Paris to Philadelphia where, while playing less frequently, he mentored such monster pianists as Uri Caine, Sumi Tonooka, and Tom Lawton, to name a few.

Solal then captivated the audience with a lengthy set of solo improvisations, mostly around standards such as "All the Things You Are" and others from the so-called Fake Book (now known as the Real Book) compendium that working bands often use. Solal created his own unique virtual compositions from these tunes, with exquisite technique, brilliance, and a capacity for imagination and musical ideas that has always been a cut above the crowd. He was helped in that by a Steinway grand piano that had an especially rich sound. While the connection between Solal and Monk is mostly peripheral, Monk was an early influence on Solal, and each certainly created his own novel stylistic approach to piano jazz.