Stan Kenton: Artistry in Rhythm - Portrait Of A Jazz Legend 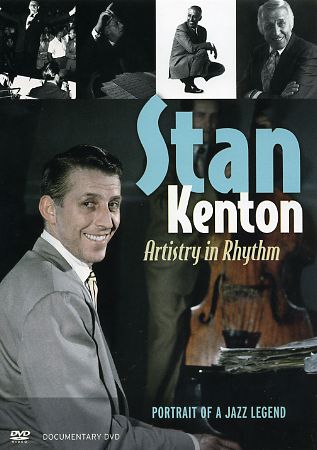 Artistry In Rhythm: Portrait Of A Jazz Legend

"I thought that [Stan] was an echo of life itself: that life is precious, life is exquisite, and life is magnificent. He lived it, and his legacy points to some of those values. Whether we are able to interpret them or not, they are there." That's noted jazz historian, educator and author Dr. Herb Wong, having (almost) the last word on Graham Carter's superlative documentary, Stan Kenton: Artistry in Rhythm, and summarizing the legendary bandleader's life and legacy about as well as anyone could.

Kenton led such an extraordinary life, and there is so much ground to cover, it's remarkable that Carter is able to epitomize so much of it in slightly less than two hours. While there are brief glimpses into Kenton's personal life (some provided by former wives JoAnn and Audree Kenton), his music is the focal point, as it should be, and provides a melodic backdrop throughout the DVD's 117-minute running time, interspersed with perceptive comments by former members of the Kenton orchestra and others. The documentary, which helps mark the centenary of Kenton's birth in December 1911, was produced "in association with the Los Angeles Jazz Institute," whose director, Ken Poston, superimposes a low-key and even-handed narrative about the history and development of Kenton's various bands from their origin in 1941 at the Rendezvous Ballroom in Balboa, CA, to their last melancholy days before Kenton's death at age 67 on August 25, 1979.

The curtain rises with Kenton (young and old) at the keyboard, introducing the orchestra's familiar theme, "Artistry in Rhythm." After an opening section that embodies Poston's avowal that Kenton "took jazz from ballroom to concert hall," the chronicle is divided into a dozen well-drawn "chapters" beginning with The Early Years (1937-1943) and closing with The Kenton Era, in which Poston and a number of Kenton's former sidemen pore over his legacy. The other episodes are titled Artistry in Rhythm (1943-47), Progressive Jazz (1947-48), Innovations in Modern Music (1950-51), New Concepts of Artistry in Rhythm (1952-54), Contemporary Concepts (1955-59), Jazz Education, The New Era in Modern American Music (1960-63), The Neophonic Years (1964-69), The Creative World of Stan Kenton (1970-78) and Coda. Each chapter in Kenton's creative sphere is unique, showing, in Poston's words, that he was "always looking forward—trying to keep up with the times." In fact, no matter what new approaches rival bandleaders were considering, Kenton always seemed to be one long stride ahead of them.

Among the more poignant images in The Early Years is one of Kenton himself, standing in an empty field and explaining that "on this vacant piece of ground there was once a huge ballroom. It burned down twice—the last time was about two years ago—and I guess it's gone forever now. Here's where it began for me," he says, showing where once there stood a bandstand, soda fountain, entrances and a balcony that encircled the Rendezvous Ballroom, where the Stan Kenton Orchestra made its debut in August 1941. It wasn't long before Kenton's music was being heard coast-to-coast each week on the Mutual radio network, and the band was on the air on Sunday, December 7, 1941, the day the Japanese attack on Pearl Harbor led to the start of World War II.

Two years later, Kenton wrote his first hit song, "Eager Beaver," and the band was on its way, moving shortly thereafter from Decca to the newly minted Capitol Records label. The orchestra's resident singer, Anita O'Day, was replaced by Shirley Luster, who gained stardom under her new name, June Christy, delivering an immediate chart-topper in "Tampico." In 1948 arranger Pete Rugolo entered the picture, changing the direction and complexion of the orchestra from then on. Rugolo, says Poston, was "the architect of the Kenton sound . . . Pete's writing mirrored not only Stan's writing but Stan's ideas. He was as important to Kenton as Billy Strayhorn was to Duke Ellington." Even so, Kenton broke up the band near the end of 1948. "He said he was going back to college and become a psychiatrist," says Bill Holman, who was to become one of Kenton's most respected arrangers. "Bill Russo once said everybody in the band was Stan's patient."

After a sabbatical, Kenton returned in 1950 with Innovations in Modern Music. That ill-starred endeavor, complete with string section, "ran for about two years," Kenton says in one of several voice-over clips. "There were about 43 men in it, and it cost a tremendous sum of money. In fact, I went broke with the thing. It was an artistic success but a financial fiasco." Bob Graettinger had started writing for the orchestra, producing such enigmatic works as "City of Glass," about which Graettinger's biographer, Dr. Robert Morgan, says, "It's not jazz," likening it instead to modern classical music. Trombonist Eddie Bert is even more perplexed. "I don't know what it is," he says. "You tell me." Down but nowhere near out, Kenton opted for a more swinging groove in 1952, adding such talented soloists as saxophonists Lee Konitz and Richie Kamuca, trumpeter Conte Candoli, drummer Stan Levey, and, later on, saxophonist Zoot Sims and trombonist Frank Rosolino to such talented holdovers as Holman, Russo and the incomparable high-note trumpeter Maynard Ferguson. Russo was chief arranger, while Holman had begun writing swinging charts like "What's New," "Theme and Variations," "Kingfish," "Fearless Finlay" and "Stompin' at the Savoy."

The orchestra also returned to radio with the successful Concerts in Miniature broadcasts and their successor, Concert Encores. Gerry Mulligan was added to the arranging staff, "setting a standard," Poston says, "for modern big-band writing at the time." The years 1955-59 were quite productive musically, capped by another masterwork, Johnny Richards' Cuban Fire! The album, says Poston, "was something very special and very unique . . . And probably legitimized Kenton to some of the critics, especially some of the East Coast critics," many of whom hadn't warmed to Kenton's music, to say the least.

It was in the late 1950s that Kenton turned his attention to another arena, that of jazz education, sponsoring a series of clinics and summer camps that, in the words of drummer Peter Erskine, "became a model [for other programs] around the world." Meanwhile, the orchestra continued its never-ending "road trip," grabbing another brass ring with Richards' memorable take on West Side Story, adding (and later subtracting) mellophoniums, cruising through The Neophonic Years, parting with Capitol Records, forming a new in-house label, Creative World, and keeping abreast of the changing times by adding rock and pop tunes and Broadway themes to the band's repertoire. But everything changed in 1977 in Reading, PA, when Kenton, who'd survived an aneurysm five years earlier, fell heavily in a parking garage and suffered a cerebral hemorrhage, an injury from which he never fully recovered. "It's a wonder he lived," says Audree Kenton. "It was the hardest recovery you could imagine. [Stan] couldn't even remember the guys' names." Nevertheless, Kenton insisted on going back on the bus, which he did until shortly before he died following a stroke in 1979.

While Artistry in Rhythm is by no means the last word on one of the twentieth century's most controversial, best-loved and charismatic bandleaders, it has plenty say about the man and his music: why Kenton succeeded, often against overwhelming odds, and kept the band and the music intense and alive at a time when most leaders had abandoned hope. And why he drove himself implacably onward until he literally had no more to give. Even without these insights, the archival footage alone makes the viewing experience more than worthwhile. To most of the many hundreds of musicians who passed through his orchestra, Stan Kenton was like a father figure. The impression given is that many of them would have followed him off a cliff (a premise underscored by the fact that some of them did, at least figuratively). The same is true of those who love and ardently support Kenton's music more than three decades after his passing. Artistry in Rhythm is for them, and for those who may have heard Kenton's music only in passing but were intrigued and curious enough to want to learn more about it. On a scale of one to ten, this engaging and informative appraisal of Stan Kenton's career in music is at least a nine.