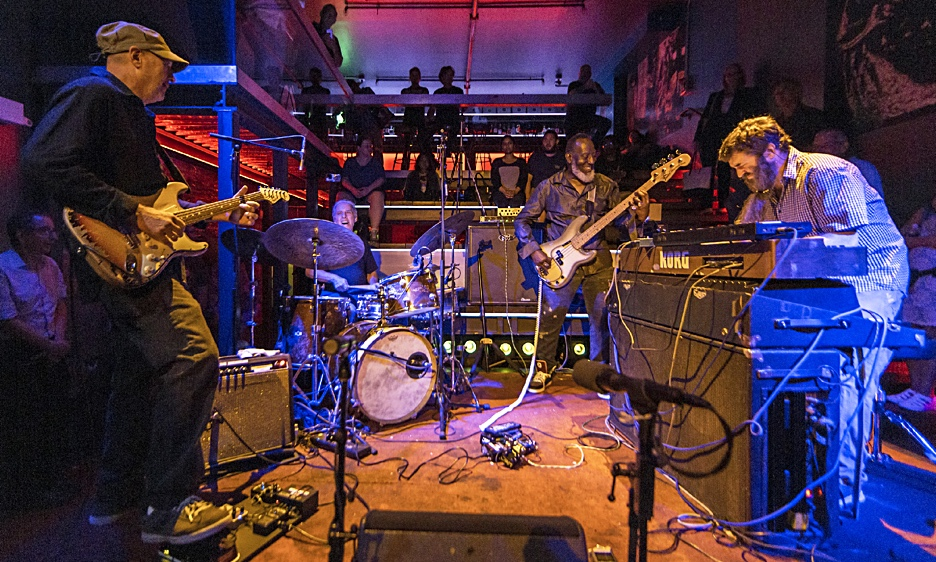 SPHERES is a jazz collective recently started by keyboardist Jamie Saft and electric guitarist Chuck Hammer playing monthly gigs at Nublu, a loft-club showcase for new music in New York City's East Village. Taking inspiration as well as its name from Thelonious Sphere Monk, their two gigs to date have seen Saft and Hammer pair up with top-flight rhythm sections and journey back into the still bubbling cauldron of late 1960's jazz-rock/rock-jazz—specifically, to the febrile years when Miles Davis was digging Jimi Hendrix, James Brown, and Sly and the Family Stone and absorbing new sounds.

As the story goes, the direction of jazz was very much up in the air in those heady years. Social unrest, John Coltrane's death in 1967, the burdensome "heaviness" of free jazz along with the popular success of genre-stretching innovators like Hendrix and others had many top figures reconsidering jazz's conceptual—and financial —future. Miles envisioned a new place for his artistry on the leading edge of an emerging aesthetic landscape and his 1969 release, In A Silent Way, was the first result, a mash-up of his classic mid-1960's quintet of Ron Carter, Tony Williams, Herbie Hancock, and Wayne Shorter and a new musical palette enabled by electronic instrumentation. Six months later, with Shorter, Joe Zawinul, Keith Jarrett, Chick Corea, Dave Holland, Jack DeJohnette, John McLaughlin, and others including Davis' long-time producer Teo Macero, he completed the re-imagining of his musical language and gave birth to the seminal Bitches Brew—not to mention, of course, Weather Report, Mahavishnu Orchestra, Return to Forever, and the many permutations of electric jazz that have followed.

SPHERES begins with those fifty year-old giant footsteps with the intention to not just revisit but revivify the ideas—and perhaps add a few new tracks of their own. In the two performances to date, Saft and Hammer have brought in stellar support—in July the electrifying Bobby Previte was on drums with Bradley Jones on the bass; in August the protean Jamaaladeen Tacuma, bassist in Ornette Coleman's Prime Time, and legendary drummer Mike Clark of Herbie Hancock's Headhunters fame, were aboard. On both occasions, these musicians' musicians created an astonishing galaxy of fresh, exciting, contemporary electronic music that was beyond categorization. To borrow a phrase from Grateful Dead bassist Phil Lesh, SPHERES is about searching for the sound—on both nights, before rapt audiences, they found it. SPHERES next performs at Nublu 151 on September 9; upcoming dates are planned.

All About Jazz spoke with Chuck Hammer after the August performance.

All About Jazz: What's the process behind the music SPHERES is making?

Chuck Hammer: From my perspective what we're working on is directly related to what Miles Davis was doing in 1969. He was trying to catch up to Hendrix and the entire visceral rock texture. What Miles ultimately added to the language was a much more complex sense of poly-harmony and poly-rhythm. The overall sense of what we played during both gigs references that, and it also references Ornette Coleman and the idea that if a phrase has its own internal logic, it can be layered onto another sonic phrase or texture that also has its own internal logic. This is not a complex idea, it's just a question of knowing the language of one's instrument well enough to play with a free-flowing sensibility and have each phrase reference something relevant emotionally and historically in relationship to that language. Also essential is an understanding of the other instruments' languages enough to react in real time to the other players, thereby having a real conversation. The music we are working on is much more rooted in dealing with the actual historic language and attempting to integrate the instruments' known language into a hyper-updated, contemporary context, a post-Hendrix, post-Miles, post-Ornette context. I suspect that the political/art context is one of global community—sonically diverse, but rooted in actual culture. It's not about tearing down the known culture but rather integrating it, which of course is a much more difficult task.

AAJ: What were the compositions SPHERES played?

CH: Everything we played was improvised. There was no discussion of key, etcetera. We just let the music define itself in real time.

AAJ: You mean there hasn't been a set list for either gig?

CH: To me, Saft is one of the keyboard masters of his generation. I have never worked with anyone with more precise sense of timing and harmony and range. His playing in the SPHERES context is at the level of a Chick Corea, and what's amazing is he plays in a bunch of contexts.

AAJ: For you personally, this series of SPHERES gigs marks your first return to live performance since your years with Lou Reed.

CH: Yes, this is really my first live playing since I toured with Lou in the late 1970's and early 1980's. I worked on soundtracks from roughly 1983 to 2000. Since then, I've focused on recording, evolving and locating an individual voice and working through a lot of the technical and aesthetic issues that resulted in the albums, Blind On Blind and Path Heart Traverse. Those studio records gave me the chance to explore, define, refine and un-refine a sonic vocabulary and discover what felt relevant. But yes, in terms of live performance, SPHERES is a re-entry.