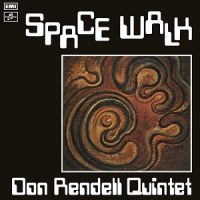 As British jazz reaches new and unprecedented peaks of popularity, major labels are revisiting their vaults and rereleasing artistically enduring but long unavailable albums. Universal/Decca's British Jazz Explosion: Originals Re-Cut is the most ambitious of such reissue programs to be announced so far in 2021. It concentrates on the years 1965 -1972, a pivotal period in the coming of age of British jazz and one which continues to inspire the generation of young radicals who are making their mark in 2021 and whose de facto standard bearer is the tenor saxophonist and clarinetist Shabaka Hutchings.

British Jazz Explosion: Originals Re-Cut kicked off on July 2 2021 with the double-album sampler Journeys In Modern Jazz: Britain (1965-1972). Tenor saxophonist Don Rendell's Space Walk, originally released on EMI/Lansdowne in 1972, is the first of at least fourteen titles scheduled for release in the series from summer 2021 into 2022. These albums are being released on 180 gram vinyl and downloads only; for reasons which are unclear, there are, aside from the sampler, no CDs.

Rendell was born around a year before fellow tenor player and British modern jazz trailblazer Ronnie Scott and the two musicians paid their dues from the late 1940s on the same circuit of clubs, bars and rehearsal rooms clustered in London's Soho. Rendell played a Lester Young-inspired brand of bop before beginning to experiment with modal structures at the turn of the 1960s. He did this first with the quintet which recorded Roarin' (Jazzland) in summer 1961. The band's lineup included Cannonball Adderley-inspired alto saxophonist Graham Bond and, at various times, future Cream bassist and drummer Jack Bruce and Ginger Baker. Three months after making Roarin', Rendell caught John Coltrane on his only British tour and was so fired up by what he heard that he doorstepped the American at his hotel after the concert. Rendell later described encountering Coltrane, and his effect on jazz, as a "golden earthquake." He continued to explore modal jazz with a quintet he co-led with trumpeter Ian Carr through the second half of the 1960s.

At the turn of the 1970s, Carr left the Rendell-Carr Quintet to form the pioneering jazz-rock ensemble Nucleus. Rendell was out of sympathy with jazz rock, just as he was with the free-jazz movement which was developing in London around the same time. He continued to pursue an idiosyncratic scalar-based direction with a succession of lineups, among the first of which was the quintet heard on Space Walk. The second horn is fellow tenor saxophonist Stan Robinson. Between them, Rendell, Robinson and vibraphonist Peter Shade doubled on soprano saxophone, clarinet, flute and alto flute, extending the group's palette. The only holdover from the Rendell-Carr Quintet was drummer Trevor Tomkins. With Shade's vibraphone taking the place of a piano, the music's harmonic framework was further loosened. Half the material on the album was written by Rendell, the other half by Robinson, Tomkins and Shade. Space Walk is a vigorous and adventurous album but with it Rendell's music fell outside the prevailing currents of jazz rock and free jazz. Despite a lower profile, he maintained his artistic integrity: the first side of his self-produced 1988 album Time Presence was the 20+ minute workout "Trane Set." One of Rendell's last appearances was at a memorial concert for Ian Carr in 2009. He passed away in 2015, aged a respectable 89 years.