Explore Ensemble debut on Another Timbre

BY JOHN EYLES
July 7, 2021
Sign in to view read count
For some time, Apartment House (or prominent members such as Anton Lukoszevieze, Mira Benjamin or Philip Thomas ) have featured on the lion's share of Another Timbre releases to the extent that the ensemble could almost be considered the label's house band; given the high quality of Apartment House's players and their playing, that has been good news for the label's listeners and for the composers whose music the ensemble has performed. In light of that situation, the arrival of Another Timbre's May 2021 releases brought something of a surprise; while one of the four albums—Linda Catlin Smith's Ballad— was performed by Apartment House, two others featured Explore Ensemble, a group which had not previously released a recording despite having given many concerts and broadcasts since it was founded at London's Royal College of Music in 2012... 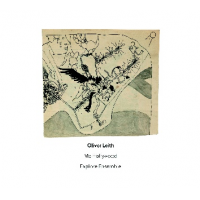 Oliver Leith
Me Hollywood
Another Timbre
2021

In 2020, Oliver Leith's debut album, Good Day Good Day Bad Day Bad Day was released on Another Timbre. It comprised one forty-five-minute piece, the title track, which was subdivided into eight untitled "movements," and had been commissioned in 2018 by GBSR, the duo of percussionist George Barton and pianist Siwan Rhys. On balance, the success of that rendition of the composition was equally due to Leith and to GBSR.

Me Hollywood is Leith's second album release and has similarities to and differences from its predecessor. Rather than one extended piece comprising the entire album, it features five compositions dating from the years 2016 to 2020, the shortest lasting five minutes and the longest fifteen-and-three-quarter-minutes. The music is all played by members of Explore Ensemble, in groupings ranging from solo violin up to a nonet. Two pieces, "664 love songs guaranteed to cure heartache" and "Balloon" are each subdivided into three "movements," giving them variety and drama.

The title piece was commissioned by the ensemble and is subtitled "for sextet and tv." It opens the album to the sound of running water, soon joined by piano and then strings, building up a multi-layered soundscape which frequently features "noises off" (maybe from the tv?) Overall, the piece has enough going on to hold listeners' attention through repeat listenings, revealing something fresh each time. A credit both to Leith and to the ensemble, of whom he says, "They are a hit team—they know my music—they play it brilliantly," a judgment which is borne out by the whole album.

Although he has accumulated a respectable discography on other labels, Summer is James Weeks' second Another Timbre release, following in the footsteps of 2019's Windfell which was played by Mira Benjamin. Whereas the music on that album was the hour-long title piece, Summer comprises five shorter pieces composed between 2016 and 2020, ranging in length from four minutes to just over thirty.

As on Me Hollywood the tracks use different numbers of players ranging from solo piano on the brief but captivating "Durham" up to an octet on the longer closing track, "Siro's Garden." In a manner similar to that of Apartment House, Explore Ensemble is not a group with fixed members but one which draws in musicians as required by the music; so, for instance, although pianist Siwan Rhys is frequently included, her partner in GBSR, George Barton, plays percussion on a couple of Weeks' pieces, notably "Düsseldorf" on which he and Angela Wai-Nok Hui—making her only appearance—both contribute tubular bells to great dramatic effect.

Weeks' compositions are frequently quite simple, with "Violet" and "Violute" being examples—their titles deriving from the fact that they are duos for violin plus clarinet, and viola plus flute, respectively. However, as "Summer" (see YouTube below) illustrates, even his less simple pieces make very straightforward listening; in all cases, they are beautifully played, with the musicians sounding as if they got under the skins of the pieces rather than just playing them. Once again, composer and players must be given equal credit for the album's success.

We are sure to hear plenty more from Leith, Weeks and Explore Ensemble.