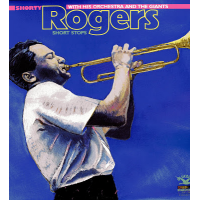 In the 1980s, trumpeter and Kenton alum Mike Vax put together a Supersax-type group called TRPTS. It released an album of harmonized trumpet classics, one of which was "Short Stop." There are lots of great tunes including "Night in Tunisia," "Trumpet Blues and Cantabile," and "Heckler's Hop." Oh yeah, one I never heard, Shorty Rogers' Short Stop. Really? How do you get to 35 years of age, listen to jazz almost daily, and not know about Shorty Rogers? I vaguely knew that Rogers had made an appearance on the TV series Peter Gunn, but that had been in the late 1950s, but it was the show's theme I remembered. Beyond that, not much registered. When Buddy Rich recorded "Rotten Kid" with his big band in the mid-1960s, I heard (or read, or was told) that the unison trumpet break was "reminiscent of a Shorty Rogers band," whatever that meant.

Trouble was, Shorty had put down his horns in the early 1960s to concentrate on arranging for television and the movies. This was a lot like Billy May or Neal Hefti, a player by reputation, but little else, because I was just too young to have heard either perform. When Rogers resumed performing in the 1980s, I knew about it, but was too busy listening to other people more my age. Rogers remained a name—a big one, to be sure—but a name nonetheless. How much do we learn by sheer serendipity. Going back into the recent history of the music from the 1940s and 1950s, and especially, of "West Coast Jazz," I started hearing a lot of players that my Right Coast upbringing had missed. And for that, thank the boom in CD reissues. Some of the players, like Don Fagerquist, were simply wonderful, but there were others, like Stu Williamson as well. And then there was Shorty Rogers. It took a while, but when the Shorty-bug bit, it bit hard.

The vehicle was the reissue of several vinyl albums on one CD, remastered as Shorty Rogers and His Giants, Short Stops (RCA). Some of the tunes I knew indirectly, like "Short Stop" (courtesy of TRPTS) and "Chiquito Loco" (courtesy of an RCA anthology of 1950s jazz). But I had never heard "Infinity Promenade."

A lot of recordings collected on the CD are very good, although since 1953, the date of the originals, the novelty of some of the charts has surely diminished. Particularly with the orchestra or big band, the charts are impressive, a sort of blend of Stan Kenton and Woody Herman, not a surprise in view of Rogers tenure as a player with both. Some were pretty conventional features for outstanding players, especially Art Pepper and Milt Bernhart, whose solo playing on "Contours" is really lovely, and not the rock-em-sock-em Bernhart of Frank Sinatra's "Got You Under My Skin" fame. Some of the small group playing ("The Giants") was also interesting, but I couldn't shake the impression from the polyphony that this was really "Birth of the Cool Goes West," a point the liner notes makes as well. Very good, but hardly unique and independent of East Coast Jazz, whatever that was.

Then you get to "Infinity Promenade." Full Stop. Here is something very different and completely arresting, even though more than sixty years have passed. A deceptively simple composition it is.

Some people have characterized "Infinity Promenade" as a very different kind of animal because of its instrumentation and the supposed "double lead" of Conrad Gozzo and Maynard Ferguson. Admittedly, I don't know what double lead trumpet(s) are: a split lead, yes; a relief lead, that too. But the idea of "double lead" eludes me because the lead trumpet sets time, phrasing, interpretation, dynamics and links to the rhythm section: he or she doesn't simply play high. I've heard some players unflatteringly referred to as "screech leads," but I don't think that's what was going on here. It's really semantics, I guess, but as an unnamed friend of mine with ample big band experience says, if the high note player is a good section player, he or she sits second, If not, fourth, "and cue the crazy stuff." Since the section consisted of Ferguson, Gozzo, John Howell and Pete Candoli I'm not sure anyone in that bunch would have been odd person out. How this got sorted is not clear to me, but maybe someone knows.

"Infinity Promenade" would make a great theme for a jazz broadcast, because it builds to a raucous crescendo, and then gradually fades out. Its form seems conventional, 32 bars, with the usual repeats and such. Even the melody, although beguiling, consists of the trumpets playing 8 bars of A minor followed by 8 bars of D minor or less ascending and descending. At the very end, D minor goes into D major to make way for the solo transitions by Art Pepper and Shorty Rogers. They are nearly perfect, with Pepper opening up the harmonies and Rogers coming in with his characteristic dotted approach and swirling triplets. In passing, I'd mention it's easy to underestimate Rogers as a trumpet player, especially in this lineup, which is like the brass equivalent of the artillery barrage at Gettysburg. Rogers plays some excellent solos, and, of course, the tune is his. He's a middle register player, and he's no power player, but if you listen carefully, there are echos of Doug Mettome in some of his phrasing and conception, and I wouldn't be surprised if Shorty had heard Mettome at the Lighthouse when he was on the West Coast with Benny Goodman. Saying that someone's solos put you a bit in mind of Doug Mettome's is no small compliment. But that's not all.

Shelly Manne, who was an honest-to-God percussionist, opens the proceedings by tapping out an A/D figure on the ride cymbal, so the tonality gets established from the get go. Manne, whose assertive presence throughout all the recordings really makes things move, is something else: encouraging, cajoling, nudging, and sometimes flat out steamrollering the orchestra that Rogers assembled. As "Infinity Promenade" repeats the initial theme, Maynard gradually gets into the act, doubling the harmony up an octave. One learns that this was Maynard's on-the-spot improvisation, which Rogers pronounced ok by him. The repeat leads into a piano break, and then all Hell breaks loose. The final restatement of the theme has Ferguson flat out screaming and fortissimo. He's not only on top of the section, he nearly drowns it out, concluding with an an assertive lip trill and hanging over the last note prior to a thundering commentary by Manne, who proceeds to lead the band out in a more restrained way. Maynard's performance is a matter of taste: most like it, but I've seen a grimace or two registered. Whatever Maynard was up to, he had it, and he flaunted it. At the same time, the low brass, which moves in parallel if inverse fashion, really sets the atmosphere for the first statement of the theme. When Maynard goes on top, they are still there, but much less in evidence, a counterweight to the upper register, almost like a seesaw, and subtly reinforcing Manne's figure on the ride. The tune is in four, but with a little imagination, it could be two, the promenade a swaggering march. If this isn't a tour de force, then what is?

As for the rest, there are a couple of tracks that reminded me of theme music for a 1960s QM television production. I had to laugh, because that's obviously exactly backward. Had I known any better, I would have realized that was jazz I was hearing on the tube, and not the tube on the jazz recording. It could almost naively make me wish for the good old days, when you could actually hear great jazz on television. As Harry Truman is said to have remarked, there's really nothing new other than the history you don't know.

This fantastic bunch of albums is all the reason you need for studying jazz history, if you need any motivation at all.