By TROY DOSTERT
September 1, 2017
Sign in to view read count 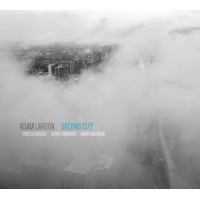 The first thing one notices when listening to tenor saxophonist Adam Larson's latest release, Second City, is the torrent of notes coming out of his horn, seemingly in unstoppable waves. But Larson's got a lot more to offer than just impeccable chops. He possesses a rhythmic sophistication and compositional cleverness that should help him distinguish himself from the pack of young tenorists on the current scene.

Seven of the eight tracks are Larson's own, and they offer some excellent post-bop heads, with a fine mixture of complexity and ear-gripping accessibility. He's got an ace team behind him, comprised of bassist Clark Sommers, keyboardist Rob Clearfield, and drummer Jimmy Macbride, ensuring that up-tempo burners like "Who Even Is That?" and "Breakout" are in terrific hands, with Larson's garrulous side coming to the fore. But Larson plays with genuine sensitivity as well, as shown on the tender ballad "Sleep Now" (dedicated to his young son). Even if it's not quite as compelling when compared to the more energetic tracks, it's only because the livelier cuts are so riveting.

With undeniable command over his instrument, Larson can do just about anything. His upper-register playing is superb, as one can hear on the irresistible "First Step," a super-catchy piece with a nice New Orleans second-line feel; Larson really likes staccato passages as well, which he can roll off with aplomb. Most impressive about Larson's technique, however, is his rhythmic creativity. One can hear a lot of Sonny Rollins in Larson's ability to play with the rhythm on his solos, often toying with the melody and playing over the bar line to expand his options. Listen to the way he tugs and tweaks the already thorny melody on the last half of "Perpetuity," where his ideas just keep coming, or his ability to sustain the closing intensity of "Uphill Climb" with feisty octave intervals.

As for the album's lone cover tune, it says something about Larson's youth that (as he reveals in the liner notes) he was long under the impression that Nirvana's "Smells Like Teen Spirit" was originally recorded by the Bad Plus. But we can forgive him that, perhaps, given that his version here is so thoughtful, steering clear of the temptation to do a pumelling, over- the-top rendition like Ethan Iverson and company, choosing instead a more even-keel approach (facilitated in large part by Clearfield's shimmering ostinatos) that better suits the intricacy of Larson's improvisational talents. With his skill as an arranger evident on this track, we can see another facet of Larson's emerging talent coming into focus.

A very enjoyable and impressive recording, Second City is a splendid outing for Larson, who's clearly someone to keep an eye out for as he continues his way on what should be a long and accomplished musical journey.

Who Even Is That?; Out the Window; First Step; Smells Like Teen Spirit; Sleep Now; Perpetuity; Uphill Climb; Breakout.