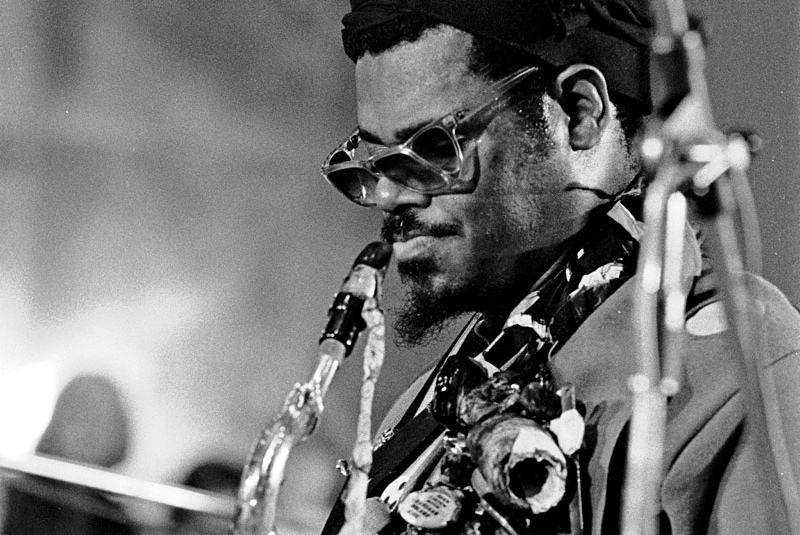 By DUNCAN HEINING
October 19, 2016
Sign in to view read count
This December, it will be thirty-nine years since Rahsaan Roland Kirk split the scene for good. He was forty-one and about two-thirds of that short life span had been spent as a professional musician. He might not have been around long but he left behind a powerful legacy that may have no parallel in jazz or any other modern music.

He might not have courted controversy but somehow it kept finding him. For some critics and musicians, he was a joke—British pianist/critic Steve Race called him the "Charlie Caroli of Jazz," after a circus performer who'd played two saxophones simultaneously. There are still those who think that way but their numbers dwindle and, nearly forty years later, Rah is acknowledged as a unique artist.

Consider this—a short but hefty black guy wearing wrap-around shades. The dark glasses are no affectation but indicate that he's sightless—he hated the word "blind." Round his neck hang a variety of instruments—a tenor sax and two other strange reed instruments, a flute sticking out the bell of the tenor, maybe a clarinet and bells, whistles and all manner of strange things. He's the most surreal sight you've ever seen. But words like 'circus' or 'vaudeville' are only insults in the truly blind, the Steve Races of the jazz world.

Call him a multi-instrumentalist, if that's the only term you've got for a guy who can play three saxophones or two flutes or clarinet and flute or tenor and piano at the same time. Better to call him, as German critic Joachim Berendt did in 1960, "a street musician' with all the wild, untutored qualities that brings to mind but coupled with 'the subtlety of a modern jazz man."

He wasn't born "Roland" at all but "Ronald" and "Rahsaan" was a name he gave himself around 1970. He came into the world in Columbus, Ohio. He must have been weird for Ohio but then some would say he was weird for anywhere. By the age of two he was sightless, putting this down much later to a nurse who 'put too much medicine in my eyes and my mother didn't find out about it too late.'

Music was there from the start. Joel Dorn, a close friend and producer of all his records for Atlantic and Warners, told how Rahsaan's first instrument was a garden hose into which he'd made holes for the notes. From hose, he graduated to bugle but stopped playing it on medical advice. Apparently, his doctor saw him play the instrument with cheeks distended and thought it could be bad for his eyes! But it was from such strange beginnings that Kirk's unique musical would be formed.

As Joel Dorn explained, "If you start on a hose and then you play the bugle at camp and then your uncle plays boogie-woogie piano and you play a beat-up saxophone somebody got for you and then you start having dreams of all kinds of strange shit. Look where you end up."

During his teens, Kirk studied at the Ohio State School For The Blind but by the age of fifteen he was already out on the road playing R&B on weekends with Boyd Moore's band. Dorn told me a story told to him by saxophonist Hank Crawford. "He would be like this 14 year-old blind kid playing two horns at once. They would bring him out and he would tear the joint up. Hank saw him in Memphis or Nashville and he said he was unbelievable when he was a kid. Now they had him doing all kinds of goofy stuff but he was playing the two horns and he was playing the shit out of them. He was an original from the beginning."

Three things stand out with Kirk. Firstly, there's the three horn business. For fans who got what he was about, this was no gimmick but a means of realising a huge musical conception. That's the second thing. In that you found the blues, a love of stride piano and early jazz and he certainly had an ear for a nice pop tune. But his vision was much wider than most of his contemporaries. According to Dorn, he was also hugely knowledgeable about classical music. Pieces by Saint-Saens, Hindemith, Tchaikovsky, Dvorak and Villa-Lobos would all feature on his albums over the years, alongside standards, pop songs and original compositions. Rahsaan's conception went beyond jazz and for that reason, he preferred the term 'Black Classical Music.' If that rings bells with more recent comments made by Wynton Marsalis, just ponder the irony that there was no space for Rah in Ken Burns' film, on which Marsalis collaborated.

By the early sixties, Rah was attracting attention. He'd won a couple of polls, albeit both in the 'miscellaneous instrument' categories. The first two years of the decade were pretty packed for the young musician. He'd already had one album, Triple Threat, issued in the fifties but between 1960-2 Kirk released albums on Argo, Prestige and his first two records for Mercury, where he was to stay for four years. During this time he'd got his own quartet, had played with drummer Roy Haynes' group and had spent three months with Charlie Mingus. It might have been just a few months but the time with Mingus was to prove a lasting influence on Kirk musically and conceptually—and also politically. His music, already full of great depth and richness, became somehow grander in its scope, fired with similar emotions of love and rage to the work of his erstwhile bassist boss.

His time with Mercury was a very positive one and as well as making his own albums, he recorded with both Quincy Jones' and Benny Golson's orchestras and with the British saxophonist, Tubby Hayes. But in truth, the records he made for the label were a mixed bag. We Free Kings, his first for Mercury, and the even better Rip Rig And Panic were amongst the best of his career but at times there was a sense that no-one really knew what to do with his talent—perhaps not even Rah himself. The stuff he did with Jones was actually pretty dire and the orchestral album he made in his own right, Slightly Latin, did not do him justice. But at any moment, even on sub-standard material, Kirk would do something amazing. For that reason, if for no other, there is no Roland Kirk record one wouldn't want in a collection.

Just as he was gaining recognition, he was far from fulfilling his potential. Audiences loved him. He blew the crowd at Newport away in 1962, just as he would again in '68. But somehow the jibes kept coming. Some people seemed to think he ought to be doing things the way Miles or 'Trane or Rollins did. But other musicians dug him. He and Coltrane jammed together and Miles was one of the first to call the hospital when Rah had his stroke in 1975. It was just that those that had the pull and the weight, didn't, wouldn't and couldn't take him seriously. And it hurt, just as the patronising insensitivity that some people showed towards his sightlessness caused him frustration. One time, he was dropped from a spot on the Jackie Gleason Show because the network's lawyers were worried he might hurt himself! Kirk offered to provide his own insurance but the gig went to King Curtis instead.

Fame, fortune and recognition were more easily found in Europe and following his first visit to the Ronnie Scott Club in 1963, he was to have a significant impact on the British scene. France was at least as welcoming and he was a regular festival attraction on the continent. Apparently, he even played Basildon in Essex (an irony to British fans, though it's meaning may escape non-British readers!).

Kirk loved Ronnie Scott's Club. He even dedicated a tune to Ronnie and his business partner Peter King—"On The Corner Of King And Scott Streets." They introduced Rahsaan to British audiences and a close personal relationship would develop between him and King and Scott. Over the years, Rah played Ronnie's maybe five or six times, twice in the Old Place in Gerrard Street and three or four times in its current Dean Street home. In 2002, I asked Pete King how they first decided to book him for the club. "I suppose in a way like anybody else we went for the three saxophone business. Obviously, here was a commercial jazz attraction. He played three saxophones at once, so we thought, 'Let's get him in.'" But as King pointed out, it was Rah's talent as a musician and entertainer that would make him a regular at the club. "The thing was for musicians to enjoy being here and playing for English audiences and that's why he kept coming back."

I asked King, if they'd ever found him difficult. He told me that Kirk seemed a bit suspicious at first.

"People must take on board that he was a blind Negro and back down the line with America's history of the coloured situation, it couldn't have been very good for him. The first visit, being blind and black, he asked to be paid every night. That wasn't very easy for us because you had to order dollars from the bank. We managed to get around that and after two or three nights he realised what he was dealing with Ronnie and I and he said I don't want any more money until the end of the gig."

From that point on he would stay with King at his home in Mill Hill and a friendship was born that would last to the end of Rah's life. Kirk was an unusually loyal friend to the club, as King explained,

"There comes a period of time running a club, when you run into trouble. The thing about Roland was, say for instance Stan Getz was here and he was playing up, which was nothing unusual, you'd just say, 'Forget it. Go home.' Then, you'd phone up Roland and he'd be ready to get on the next plane and come over. Things like that were absolutely fabulous." Over the years pop stars would come up to catch Rah at the club. Stevie Wonder would bring his whole entourage whenever their UK visits coincided and once at the Old Place, the Beatles turned up. King recalls the time with typically wry humour, "I think it done 'em good to see Roland Kirk. Frightened the shit out of them. Showed 'em what they had to contend with professionally."