Curtis 'King Curtis' Ousley was already a well-respected Jazz tenor saxophonist in 1952 when he moved to New York, to concentrate on doing session work for the growing Pop and R&B markets. Over the next decade, saxophone became the pre-eminent lead instrument within Rhythm & Blues/Rock n' Roll, and King Curtis became its leading exponent, spicing up massive numbers of hits with ear catching solos, sealing his reputation as one of the leading instrumentalists of that era. Perhaps he'll be most remembered as blowing that solo on The Coasters 1958 smash “Yakety Yak.” King Curtis was originally part of the late 40's honking Texas tenor sax brigade, counting Arnett Cobb, Earl Bostic, and Illinois Jacquet as influences

Listen to music long enough, and it's almost bound to happen: You're not sure exactly what you want to listen to, but you know that whatever you listen to needs must bump and groove. The Ultimate Soul & Jazz Revue, an anthology of American jazz, soul and R&B recorded live at a Copenhagen music festival by ...

Derek Brown: All Figured Out

Tenor player Derek Brown has made a name for himself with a concept called “BEATBoX SAX," a method of playing saxophone in a continuous stream of pops, honks, melody and slap-tonguing that comes out like a hip-hop variation on Boots Randolph's old novelty tune. “Yakety Sax." He has put several videos on YouTube of him doing ... 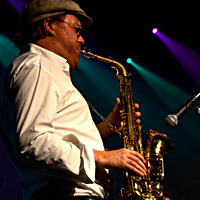 "The album is called Coast to Crossroads because I'm based in Indiana, the Crossroads state, but I also work a lot on the West Coast and East Coast," explains saxophonist Rob Dixon, who leads this trio session with drummer Mike Clark and seven-string funk guitar maven Charlie Hunter (who also served as producer), plus occasional guest ...