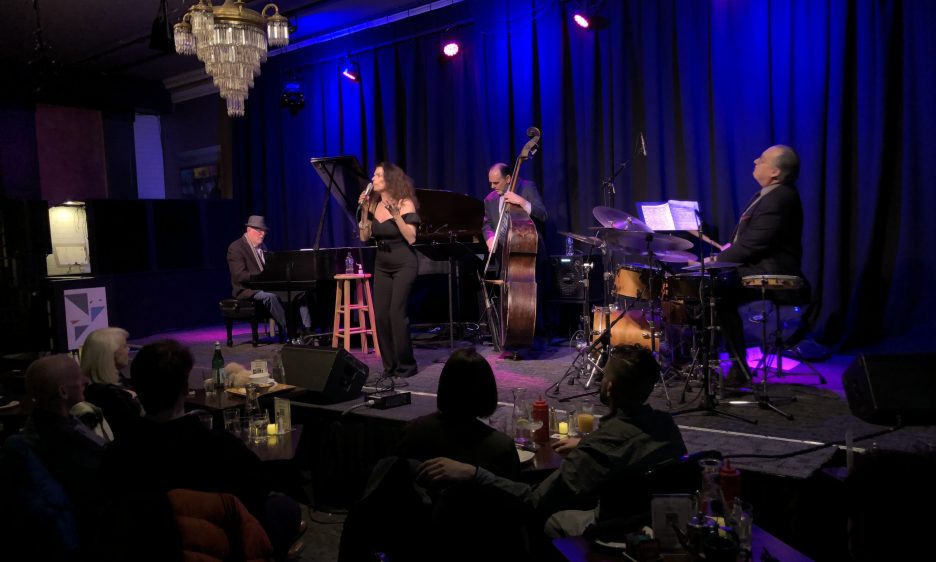 Let me be frank. I'm often dismayed when I see a new album from a promising new jazz artist and review the song list and it's all jazz standards. Don't get me wrong, many of the songs composed in the first half of the 20th Century are the finest songs ever written. But, as jazz standards, they've been performed a lot. In fact, that's part of the definition of "Jazz Standard." But, is there an upper limit? The answer to that is no if the artist does something new with a standard; puts their own stamp on it and creates a unique version, sometimes even bordering on a new song altogether. I'm thinking of artists like Tierney Sutton, Kurt Elling, Dianne Reeves and others along that line But, do we need yet another straight up version of a song, even if it's a great one, that's been done to death? I often ask myself, "Is this an improvement over Ella Fitzgerald's version?" Well... usually not.

So it was with some ambivalence that I noted Roberta Gambarini would be performing at Dazzle for two nights. I've seen her a couple of times before and enjoyed her performances because she can really sing. But, her repertoire is primarily songs from 70 years or more ago. However, her sheer talent drew me to the show and convinced me that it would be time well spent.

And it was. Simply being in the same room as someone that can sing like she can is the kind of thing that makes life worth living. Before anyone played a note, she started the show by walking up to the microphone and just started singing. Perfect pitch is part of the package. She also has perfect control and total command over every aspect of her singing. Phrasing, intonation, dynamics, emotion, you name it, she's unsurpassed in every category. (There may be other vocalists that are on par with her, but finding someone significantly better in any category will probably require a search of other solar systems.)

Yes, the program was primarily jazz standards but hearing them executed as flawlessly and emotively as she did on Saturday night was pure joy. Take Billy Strayhorn's "Lush Life." There's a song that's been done almost as often as the "Happy Birthday Song." I'm no singer, but I've heard it often enough that I know all the words. But in Gambarini's hands, it wasn't just a song. It was a lament, a painful rendering of rejection and its aftermath, a tear jerker. Her special emphasis on the song's turning point, "Ah, but I was wrong... again," was a gut-punch.

She explored the agony of unrequited love again in a medley of Frank Sinatra songs. In introducing those, she offered her opinion that Sinatra was the greatest torch song singer ever, male, she clarified, probably because she's in the running for the female award in that category. But to prove she wasn't all about the sorrow, she quickly followed the torches with Bob Dorough's "Devil May Care," a kind of counterpoint to the prior mood by taking a "heck-with-it-all" attitude.

Toward the end of the set, she brought out her trombone, or maybe it was a flugelhorn. In any event, it was a medium-low brass instrument that she created with only her mouth and cupped hands. Although she looked like she was playing a blues harp, she was definitely not trying to be the next Junior Wells.

One of the many stories she told between songs was how she and her family went to see Carmen McRae at the Umbria Jazz Festival sometime in the late 20th Century. She was born and raised in Italy but caught the jazz bug early. That year at the festival, McRae played eight nights in a row and Gambarini went to see her every night. McRae's pianist for that gig was Eric Gunnison who also happened to be Gambarini's pianist Saturday night. She got to know Gunnison because of the connection made at that festival and they've kept in touch ever since. As a result, Gambarini plays Denver once or twice a year, sometimes with a larger ensemble, but other times with a trio like on Saturday night. This time, Paul Romaine on drums and Mark Simon on bass rounded out the band. All three musicians are based in and around Denver and are some of the area's best. And because all three have backed Gambarini so many times, this wasn't simply a pick-up band of local players, but rather a group of seasoned musicians experienced with this particular vocalist.

Although Ella Fitzgerald performed the definitive versions of many jazz standards, she's no longer available. Roberta Gambarini, however, is. And even if you've heard most or all of her songs many times before, it's still very much a worthwhile pleasure to be in the same room with her when she sings them.

Easy to Love; In Your Own Sweet Way; The Duke; You Taught My Heart to Sing; Something to Live For; Lover Come Back to Me; La Puerta; Lush Life; When Lights Are Low; Sinatra medley: What's New/The Thrill is Gone/I'm a Fool to Want You; Devil May Care; Estate; Fly Me to the Moon.