Rick Mandyck: The Return From Now 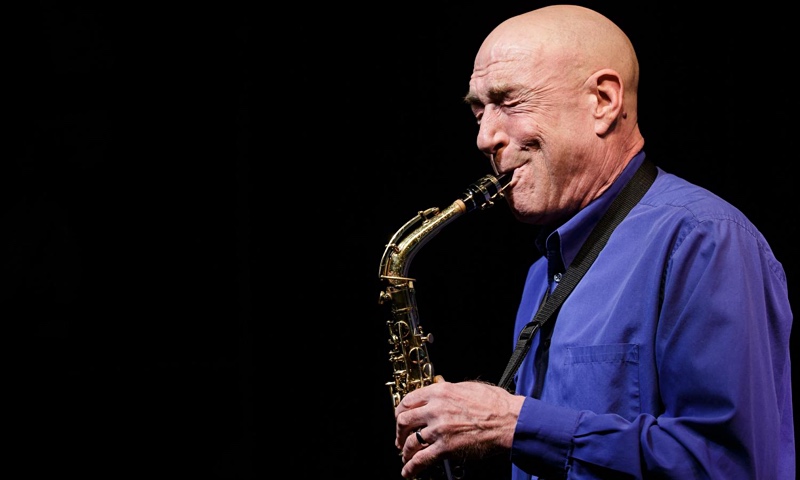 By PAUL RAUCH
February 3, 2017
Sign in to view read count
It was a cold Tuesday evening the last week of December. 2016 was mercifully coming to a close, this evening, a final chorus of a long blues blown soulfully, and mournfully into the night. I sat at the bar at Seattle's storied jazz spot, Tula's, in eager anticipation of the evening's performance of a quartet led by veteran bassist, Paul Gabrielson. Gabrielson had gathered a quartet of top tier, Seattle based musicians that evening, featuring pianist Bill Anschell, and drummer John Bishop. At that moment, the fourth member of this much anticipated quartet, Rick Mandyck, approached me, a joyous smile on his face illuminating the dark confines of this historic venue. "This feels strange," he said, his eyes panning the stage. "I heard tale that you're playing saxophone tonight," I remarked, alluding to his years absent from the scene playing both alto and tenor saxophone. " First sax gig in fourteen years," Mandyck replied. I was feeling extremely fortunate to be there, I knew something special, something magical was about to take place.

Throughout the eighties and nineties, Rick Mandyck was the most complete, and progressive saxophonist in Seattle, and to those closely associated with jazz music in that period, a true innovator of the instrument on a national scale. After switching to playing primarily tenor in the nineties, the Emerald City was blessed by the presence of three historic artisans of the tenor—Mandyck, Hadley Caliman, and Don Lanphere. Among the three, Mandyck's lyrical approach stood out, his live appearances much anticipated at clubs like the New Orleans, Jazz Alley, the Pioneer Banque, and in the very room where we took musical refuge that evening, Tula's, in the Belltown neighborhood. A series of illnesses, and a very serious hernia injury made playing saxophone extremely painful, necessitating that he give up the instrument, to set aside that which had given him the contentment of expression, of his ability to author and share his musical and spiritual insights to those of us willing to listen. And listen, we did. "It was unfortunate in most ways, but I think in a lot of ways, with guitar and later piano I got to learn a lot more about music. There's just all these vistas, chords, wow, two notes at the same time! Certainly after you've done something for that long, and you take it away, there's an emptiness, a missing space, but I decided to try to fill it with something like piano, which is my current thing. Just it's unlimited harmonic possibilities."

And so Mandyck's musical legacy continued as a guitarist, still directing his creative genius into what was, in reality, the instrument he began his musical journey with as a youngster. "Guitar was my first instrument. My Italian grandfather, Nick Conti, was a musician, and was a very big musical influence on me. He got me interested in music. When I was about five, I was bugging everybody for a guitar, there was a Hawaiian guitar in the attic, with a wide neck. He put a different nut on it so the strings were a little bit easier, but it was an incredibly hard instrument to play. But I loved it. They tried to discourage me, but it didn't work," he states with a chuckle. As a guitarist, Mandyck was impactful, continuing his musical relationship with Greg Keplinger, Thomas Marriott and others. But even as much as he was appreciated and respected as a musician on any chosen instrument, his departure as a saxophonist was impactful as well. Perhaps his unique talent was even more appreciated during the past fourteen years, as his legend as a pure saxophonist grew not as some sort of jazz tall tale, but as a statement of fact, of witness by those, as myself, who were there in the eighties as he molded his identity as an alto player, and his change in the nineties, to the tenor.

Six years into the new century, Mandyck began to appear at the New Orleans club as a pianist, sitting in on the Friday night sessions with trumpeter Thomas Marriott, bassist Phil Sparks and drummer Matt Jorgensen. Those of us who were aware of his musical legacy in the city, were amazed. The rumor was that he had spent the past six months learning the piano, sequestering himself sixteen hours a day behind the keyboard to do so. "Sixteen hours a day, no. Eight, yes," says Mandyck. "I got my keyboard in July, and that January I started a steady gig with Thomas Marriott, Phil Sparks and Matt Jorgensen, at the New Orleans Club. Every friday night, and the piano was so difficult to play, so dead. My first gig there, I lasted maybe two or three bars into my first solo, and my hands were in complete knots. Gay Anderson (proprietor of the New Orleans) was a very big supporter of me when I first started playing piano. She gave me the opportunity to do that. One of the other great things about the gig at the New Orleans was that every pianist I know came down and gave me a lesson. I mean everybody." Premier pianists such as Dawn Clement, Dave Peck, Eric Verlinde, Marc Seales, Ryan Burns, and Ron Weinstein would stop in to see Rick and always contribute to his evolution as a pianist. Travis Shook, from New York would stop in time to time.

It became very clear, that Mandyck possessed a special musical gift, including the ability to self educate and dedicate himself to whatever musical task was at hand. In speaking with him, and hearing his story of how this musical educational evolution has taken place, particularly in his early years, this was hardly anything new for him. But his illness, and injury were a different set of challenges, a bridge not yet crossed on this journey of music, of life. "I'm pretty much self taught, I attempted to go to music school when I was sixteen, and they wouldn't let me test out. My professor would say, 'OK, everybody except Rick.' I started studying music at the University of Arizona in Tuscon, I was young, I was able to get in and take night classes, but the bottom line was I was too young, I was not ready. I've pretty much been so stubborn about many things in life, but, I've been pretty much self taught."

Mandyck improved so rapidly on piano, it was startling. He began to drift into trio performances with old friend, drummer John Bishop, and either Jeff Johnson or Paul Gabrielson on bass. Essentially, he would gig anywhere there was a good piano, but his home stage slowly became Tula's, with appearances all over town. His playing became brilliant, yet Mandyck was largely now an unknown quantity, in a city where he had established a legendary musical legacy on saxophone. His musical and personal relationship with Bishop, Johnson, and Gabrielson remained what it had always been-a deep friendship based on love and creative energy. " Me and Paul Gabrielsen and John Bishop for the last three or four years, we've developed quite an understanding, and previous to that, me, John and Jeff Johnson," states Mandyck, a tone of respect and love in his voice. He is undeniably deeply appreciative of his time spent with these special voices on the Seattle scene. "Jeff Johnson has accomplished what we're all trying to do as musicians, finding your voice, finding your way of interpreting everything, and having it be you. That's what we're all trying to do," he states respectfully. This comment was very interesting to me, with Mandyck stating this as a pianist, where as a saxophonist, performing with these same musicians, he had established a reputation as a player who very much enjoyed the pianoless format, with just bass and drums providing the harmonic and rhythmic structure. "I think that most pianists and guitarists when they comp, even if they're trying to really listen to you, about what you're doing harmonically, they're going to put, in some way, their harmonic stamp on your soul. Certain pianists will not listen to you at all, and will almost try to bully you into doing things. When there's no chords, it's so wide open, it gives you the opportunity to create your own harmonic canvas. It also creates an opportunity for you to suck mightily, if you don't. It's a double edged sword. It's all out there," he says, and so this sort of sensitivity, of support, without harmonic constraint became a trait of his as a pianist as time wore on.

And so I sat in eager anticipation of the evening performance to come, to hear the beautiful intonation, the one of a kind lyricism that I had come to expect from him. I was emotional in the sense that I felt joy for him, for his reimmersion into the saxophone world, for his good fortune in life, and for the good fortune of everybody in that intimate venue that evening, to witness this marvelous music, and be a part of this wonderful story.

It was the beginning of another phase in Mandyck's eclectic journey, that somehow brought him to this city of broad ideas and interests. A journey that began in the upstate New York hamlet of Endicott NY, just a few hours north of New York City, and the most energized and prolific jazz scene in the world. "Actually I used to go to New York when I was a kid to get in trouble. I didn't really have a musical connection to New York City until the nineties," he says jokingly. After his time in Arizona, and a short time spent in the San Francisco bay area, he headed north to the Pacific Northwest, and the legendary and vastly underappreciated jazz scene in Seattle. "I came to visit a friend that I grew up with in New York, that lived in Magnolia in 1978. He told me, 'Richie I think you should play saxophone,' because I played flute at the time. He rented a saxophone for me, an alto, and that's what started the whole thing. I just started playing, playing on the streets." I smiled considering the notion of Mandyck playing on the streets, or more specifically, at Seattle's famed Pike Place Market. Street musicians are an integral part of the experience at the famed spot for both locals and tourists alike, a true part of the fabric of life surrounding the market culture for decades. To me, the thought of Mandyck honing his saxophone chops at the market made perfect sense, in a very Seattle sort of way.