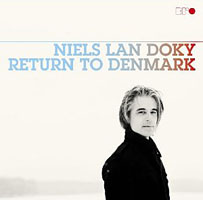 The trouble with Niels Lan Doky is that, like Saint Paul, he seeks to be all things to all men. He's a pianist, basically in the Bill Evans tradition when it comes to jazz, but says he's equally at home with classical, world, pop, soul, rhythm and blues and electronic music. He lays claim to being a composer, producer, arranger, writer and film director.

Of Danish-Vietnamese origin, he has been a US resident recently—and, on occasion, France. Return to Denmark celebrates the pianist's return to what he calls "the motherland."

On it he tends to go off like a firework, exploding in all directions. For all his obvious technical ability, Lan Doky needs to learn that less is often more. But it's still the most interesting album to have come out of Denmark in a long while.

There are five originals; the best "Children's Song"—uncharacteristically simple and very beautiful—was originally written for Doky Brothers (Blue Note, 1996), a collaboration with brother/bassist Chris Minh Doky. The opener, "Farewell Song," is an uneven mix of the romantic and the rhythmic. "Piano Interlude / The Woman From London" is similar; a marriage of two themes, the second the result of what the pianist calls "a psychic vision."

Then there's the up-tempo title track and "Friendship," which prove that, if only he could relax and stop trying to be romantically portentous, Lan Doky could be up there with the very best of them.

He hits a nice groove, except for an irritating overuse of glissandi as he examines his roots with a medley of "No Problem" and "Jordu," two tunes written by Duke Jordan, the ex-Charlie Parker pianist who found a refuge in Denmark. And in a tribute to his father, a classical guitarist, Lan Doky tackles Francisco Tarrega's "Alhambra." The transposition from six strings to 88 keys is interesting but, in the final analysis, only partially successful.

Of the standards, he's most at home on Gershwin's "How Long Has This Been Going On?" Then there's a heartfelt interpretation of "Secret Love," from Calamity Jane and a rather overblown "Here's That Rainy Day."

Since moving home, Lan Doky has been a prime mover in the reopening Copenhagen's former number one jazz club, the legendary Montmartre. He has written "The Story of Earth And Water"—the theme for the United Nations' 2010, Year of Biodiversity project—and been knighted by Danish Queen Margrethe II. He is said to be working on his third film and writing a new book. Hopefully, one day, he'll find time to make a truly satisfying jazz piano album.

Farewell Song; No Problem / Jordu; Piano Interlude / The Woman From London; Alhambra; Here's That Rainy Day; Children's Song; Secret Love; Return To Denmark; How Long Has This Been Going On?; Friendship.