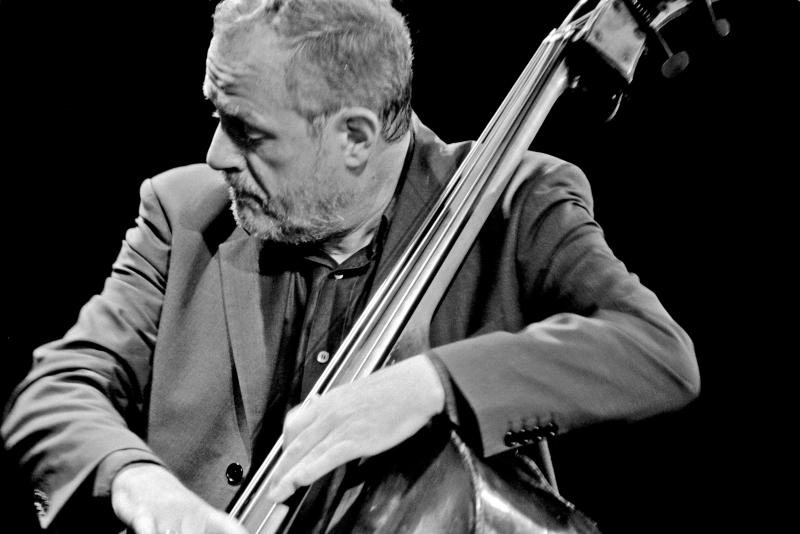 The seeds were planted by Oscar Pettiford, the seminal American cellist and bassist who put down roots in Copenhagen in 1958, and by the homegrown virtuoso Niels-Henning Orsted Pedersen, who played his vintage Italian bass like the nimblest-fingered guitarist when he wasn't bowing like Giovanni Bottesini. In August, 2012, the Danish capital's new Opera House was the locus of BASS2012, Europe's biennial and biggest convention of classical and jazz double bassists, lured by some 150 events: concerts, master classes, workshops, competitions—and schmoozing. A world record may have been broken when more than 100 stand-up bassists gave the opening concert in Tivoli Gardens. A houseful gathered for two nights at Scandinavia's renowned Jazzhus Montmartre to pay homage to the late Ørsted Pedersen. On Nordic Night, two Danish master bassists took the stage for a set, followed by two others. The audience stood, sang and hummed while Bo Stief and Jimmi Roger Pedersen improvised on NHØP's favorite folksong, "I skovens dybe og stille ro (In the Deep and Quiet Peace of the Forest.)" They were followed by Mads Vinding and Jesper Lundgaard, who teased the auditory nerves with innovations on "Old Folks" and "Bye-Bye Blackbird."

More Women Instrumentalists Than Ever

There are more woman instrumentalists on today's scene than ever, avers jazz historian Thomas Cunniffe. Over 13 issues in Jazz History Online, Cunniffe and his staff have written profiles and CD reviews of more than 150 woman performers, from vocalists Cyrille Aimee to Brigitte Zarie. Most have had albums reviewed at JHO. And, yes, most are singers. But many—including pianist Toshiko Akiyoshi, reed women Jane Ira Bloom and Anat Cohen, trumpeter Ingrid Jensen and bassist/singer Esperanza Spalding—cover the instrumental gamut.

A separate column, "Women in Jazz: The Instrumentalists," focuses on new releases. The most recent, by writer Amy Duncan and Brass Tacks, opens with a newcomer to the Danish jazz scene, saxophonist/flautist/composer Sarah Elgeti. On her debut album of 12 original pieces, Into the Open (Your Favorite Jazz, 2012), writes Duncan, Elgeti's variety of styles "comes across as a unified whole. Her personality is like a golden thread tying all of her work together, with no sense of fragmentation."

"We have over 800 weekly readers and 375 FaceBook fans," says Cunniffe, whose discography research was included in the revised edition of The Smithsonian Collection of Classic Jazz (Sony, 1997). He has written liner notes for albums by local and national artists, including guitarist Charlie Byrd, saxophonist Michael Hashim and vocalist Donna Wickham.

Cunniffe performs as a vocalist in the Denver metro area, both in jazz and classical choral groups. He is proud of his blossoming site's book reviews and interactive features, such as the Swingle Singers' history. Nearing a year and a half online, however, the founder has had to mount a sink-or-swim fundraising drive. So far, he revealed, about $2,500 has been raised.

What Got You Into Jazz?

That question, on the LinkedIn blog Skip Prokop Jazz Friends, is drawing musicians like fireflies. A delightful comment from Norwegian saxophonist Bernt Sverre Kvam deserves exposure [Note: the following quote is corrected for spelling and typos]: "I heard Stan Getz and Charlie Byrd in the late '60s and it grabbed me so much that I went down to the local record shop the day after and bought all the Stan Getz records I could find. After Stan came [guitarists] Wes Montgomery, Jim Hall and Pat Metheny, harmonicist Toots Thielemans and many, many more. I think I have all their recordings. I started playing guitar at the age of 14. Playing in a band called Tony & the Swing Blues. Big in Norway in the '60s. Started in the band at age 16 in 1967 until we split in '72. Became professional in '74 in a pop group called Staccato. Started playing flute in '73 and chromatic harmonica in '75. I play all these instruments when I play concerts. This week I'm playing at Haugesund International Jazz Festival on Wednesday and Thursday so wish me luck." We did, Bernt.

The 42nd "All Nite Soul," honoring the 46-year-old Vanguard Jazz Orchestra, offers a lineup of some 80 players and singers on Sunday, October 7, at Saint Peter's Church, Lexington Avenue and 54th Street, Manhattan. Starting at 7:00 PM, the VJO performs with special guests. There's also a folding-panels display of VJO photos, history, discography and press clippings. Jazz Vespers starts at 5:00 PM, with pianist/composer Fabian Almazan and his Strings Group. Soul food is for sale at the adjoining Hungry Souls Café. A suggested $25 donation can be paid in advance or at the door. Take the "E" train to Lexington Avenue or the Number 6 train to 51st Street.

Founded in 1984, TRG is a remarkable quintet of Swedish singers, with a string of albums and hundreds of worldwide concerts underscoring their "instrumental" harmony magic. "Some amazing singing intonation done live," emails Dixieland bandleader Steve Barbone, about TRG's YouTube video.