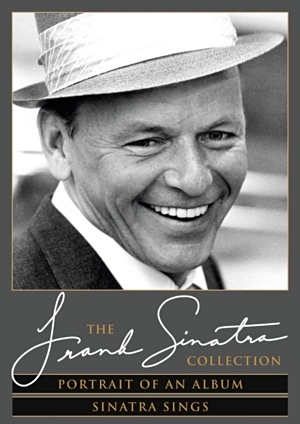 The third release in The Frank Sinatra Collection concludes with the compilation Sinatra Sings, a retrospective of particularly memorable moments across forty years of Sinatra performances in the studio, on the stage, and on TV, narrated by his daughter Tina.

But it opens with the remarkable Portrait of an Album, which documents the recording sessions for L.A. Is My Lady (1984, Frank Sinatra Enterprises) as they actually laid these tunes down. Arranged and conducted by Quincy Jones and produced by Phil Ramone, Portrait is truly an all-star celebration.

"What I love about him is, his basic respect is for his love for music and his roots, and his roots really come from being a big-band singer," Jones explains, as the video of Sinatra recording his vocal for the swinging "(It Will Have To Do) Until the Real Thing Comes Along" proves his point.

"We got all these great all-stars," Jones continues. "You look up and see a rhythm section with George Benson, and Ray Brown, Steve Gadd and Bob James and Lionel Hampton—that's as good as it gets!" As if on cue, guitarist Benson pops up onscreen, ripping off the solo that helps to introduce "After You've Gone." It's SO COOL being able to see Benson and Hampton rip through their mid-song solo jams, too.

Sinatra's vocal in "How Do You Keep the Music Playing?" is as deep and soft and wondrous as an ocean—so good, in fact, that the musicians break into applause when he's done. Customized to call out many of the session's participants, "Mack the Knife" roars with all the swing power you'd expect, Q hard-rocking the beat while Sinatra's vocal moves from bouncing on the rhythm to punching out the rhythm with each passing verse. The band applauds for this one, too.

Extended electric bass and blues guitar grumble beneath Sinatra's vocal in "Stormy Weather," partially shot in black and white for a classic, timeless look. His voice tumbles up and down the phrase "I'm weary all of the time...so weary all of the time" to make sure you know how much he means it, while the band stomps out their ensemble break hard as a rock.

"What makes him probably one of the best singers is, first of all, he's still got pipes," reflects producer Ramone. "When you have a voice that is able to maintain itself over all these years, it lowers down. You start to lose the top, but he's gained another four or five notes down below and he utilizes it well. He knows when to hit it hard, when to let the band cook—he knows instinctively."

"It's an incredible pleasure to work with a big band in a big room and have 'The Boss' out there, you know?"

Sinatra Sings seems to bring this series full circle, back home. The opening "World on a String" comes cut from the late 1960s, when Sinatra ruled the American songbook with dictatorial impunity—when he throws his head back and roars, "Man, this is the life!" you know he's not joking. From this same performance, he belts out "That's Life" like a brassy blues, phrasing several lines like a trumpet would play them, while electric organ spills around the sound of soul like sunshine on a beach. His animates the lyrics in his bouncing romp through "I'm Getting Married in the Morning," then jumps in with the Count Basie orchestra (led by the ubiquitous Jones) to blow through "Fly Me to the Moon" like a storm.

Sinatra Sings also reveals more of the man than one might expect from a collection of otherwise unrelated performances (as profound as they may be). He introduces "Chicago" as "the one I love doing the most."

"One thing I've always tried to reach for in my approach to a ballad is respect for the lyric," he explains to introduce this medley of "It Was A Very Good Year / Young At Heart." "I try to do it the way that I think the writer would like to have it done." Best of all, rarely seen black and white footage from the original "It Was a Very Good Year" session is priceless today. Watching Sinatra record this classic is like opening a window into another, lost world.

In Sinatra's own unique fashion, the closing verse to "My Way" from his historic televised 1974 concert with the Woody Herman band before a genuinely adoring Madison Square Garden crowd, is as much a soul-rending soliloquy as the famous scene from "Hamlet."

Portrait Of An Album
The Best Of Everything; (It Will Have To Do) Until The Real Thing Comes; It's All Right With Me; How Do You Keep The Music Playing; A Hundred Years From Today; After You've Gone; Teach Me Tonight; If I Should Lose You; Stormy Weather; Mack The Knife; L.A. Is My Lady.

Sinatra Sings
I've Got The World On A String; That's Life; Moonlight In Vermont; It Was A Very Good Year; Witchcraft; Chicago (My Kind Of Town); Get Me To The Church On Time; Medley: It Was A Very Good Year / Young At Heart; Fly Me To The Moon; Night And Day; All The Way; You Make Me Feel So Young; I've Got You Under My Skin; The Lady Is A Tramp; My Way; Strangers In The Night; Theme From New York, New York.